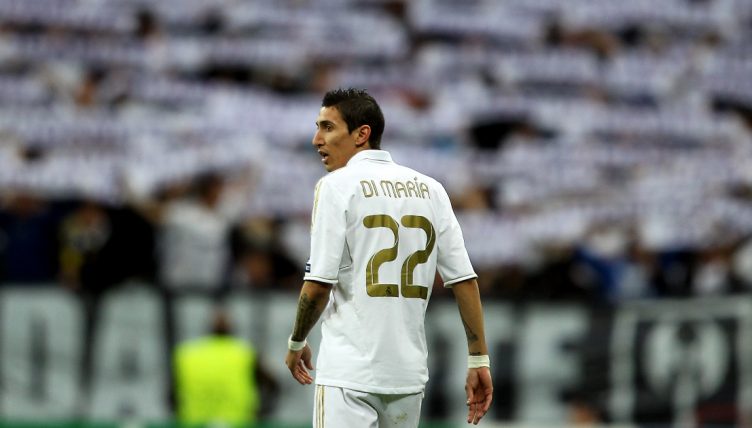 I’m going to start this article by showing you the best Real Madrid goal you haven’t seen before.

It came in the Spanish club’s pre-season demolition of Guangzhou Evergrande back in 2011, but don’t make the mistake of thinking the standard of opposition in any way lessens the quality on show.

Angel Di Maria was about to embark on his second season in Madrid after playing his part for a team that scored 102 goals – including 29 in its last six games of the season – yet still couldn’t beat Barcelona to the title.

Jose Callejon had returned to his boyhood club that summer, while the arrival of Hamit Altintop from Bayern Munich provided further competition for places. Di Maria would know the pressure was on to keep up the good work and show Jose Mourinho he still had that je ne sais quoi.

Against Guangzhou, he did just that, showing the kind of pace and control rarely even seen in the Madrid squad.

To beat your man with stepovers is one thing, but to barely miss a beat before curling in a perfect rabona cross is another. It’s so special that I wasn’t sure whether ‘curling’ or ‘rabona’ would be the right word to italicise in that sentence.

Di Maria was somehow both the archetype of a Real Madrid player and the opposite of that model, both at once. From that point of view, it almost makes perfect sense that he was among the first signings made by Mourinho, himself both perfect for the club and the last thing they needed.

Mourinho had inherited Cristiano Ronaldo from Manuel Pellegrini, but he had also been handed a number of players whose race had been run at the highest level, with local heroes Raul and Guti among those moving on in the same summer that Di Maria joined from Benfica.

Joining Real Madrid as a creative player in the Ronaldo era is a double-edged sword: you’re expected to lay on chances for the club’s talisman, rather than stealing his thunder, but you also need to catch the eye enough to earn your status as a Galactico.

Di Maria approached this in the ideal way: big moments of end-product against smaller teams, along with moments of magic against Madrid’s fiercer opponents.

One of his first assists for the club, in a Copa del Rey victory over Murcia, certainly ticks the first of those boxes: here, he takes advantage of the greater freedom afforded by lesser opponents but still produces the kind of delivery that screams to fans, ‘See! This is why I’m here!’

‘Sure,’ he’s saying, ‘it might be Murcia this time, but no one’s stopping that.’

It’s a snooker shot of a pass, and it couldn’t have been played more perfectly.

Now, showing you could do this in bigger games isn’t the same as actually doing it, which is where we can look at his start in front of goal: his first three strikes for the club came with his right foot, left foot and head, in that order.

But his first truly Real Madrid goal may be the 2010 effort against Real Zaragoza.

No, not necessarily the finish, which was admittedly tidy enough, but the fact that he produces his trademark celebration before the ball has even crossed the line.

If that isn’t a power move befitting of the club, I’m not sure what is.

The most satisfying goal of his, though – at least in a Madrid shirt, came against APOEL in the Champions League.

Pardo declared internationally for Cyprus in 2017, and while I’m 95% sure the Spanish-qualified player didn’t make the decision purely to avoid returning to Madrid, no one can watch this goal and say with absolute certainty that this didn’t enter his considerations.

As the ball begins its upward trajectory, there’s definitely a look from Pardo. Does that look say, ‘How many more years do I have to wait before I can play for Cyprus?’ Only he knows the answer to that.

Other players may be better than Di Maria in certain facets of their game, but few can match him when it comes to putting the ideal weight on a ball.

That may come in part from years of knowing a perfectly-weighted pass would be tucked away by a ruthless Cristiano Ronaldo, but the goals against Zaragoza and APOEL show he’s no slouch when the opposition goal – rather than the head or boot of a team-mate – is a target.

Take this highlight of his all-too-brief Manchester United stint: it’s rare that a goal scored at this speed has a frame-by-frame feel about it, but there’s almost a recognition from Di Maria that he needs a little more lift on the ball.

Judging elevation on a chip is a tough ask at the best of times, but here he seems to achieve the feat while in the process of hitting the release button.

It’s a physics-defying scoop, not just in terms of where it ends up but in how long it takes to leave his boot. And if that’s him in his worst season, the prospect of an in-form version is terrifying.

Ultimately, Di Maria only won a single league and Champions League crown during his time in Spain.

He might have won much more were it not for another left-footed Argentina international, but still, at least he provided some wonderful moments.

There won’t be a single Real Madrid fan who doesn’t have at least one fond memory of his four years.