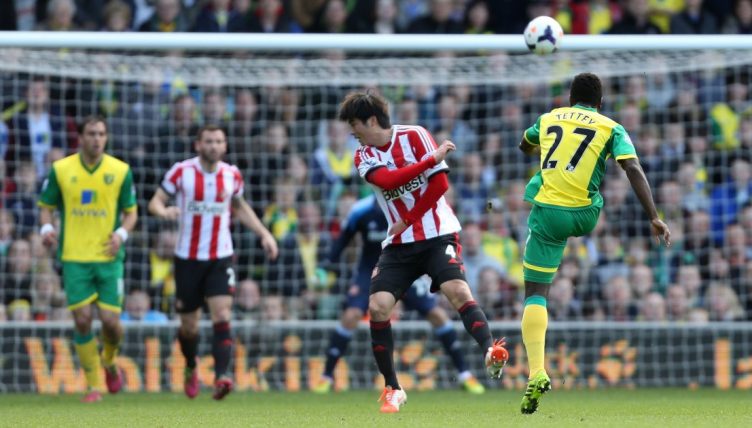 We really should talk about Alex Tettey’s goal for Norwich City against Sunderland more than we do. But his timing was absolutely awful.

Not all Premier League goals are created equal – not even the ones that seem like they might be.

No low driven shot from 10 yards, for example, will match up to Sergio Aguero’s winner against QPR in 2012, for the simple reason that it won Manchester City their first ever Premier League title.

Similarly, few halfway line strikes will compare to David Beckham’s effort against Wimbledon, purely due to the mystique around what was, if we’re being honest, as inconsequential a goal as you can get.

And, just like those two strikes and the ‘lesser’ copycat efforts which followed, Alex Tettey’s volley for Norwich City against Sunderland saw its impact suffer from having arrived in a season of sensational strikes.

There are a number of ways you can describe a goal like Tettey’s, but not a single one of them can really do it justice within the context of a match report.

You can call it a thunderous strike, or even a thunderbastard if you are so inclined, but all that will tell readers is that Tettey put his foot through the ball from a fair distance.

You can call it uncharacteristic, but even a tap-in would be uncharacteristic when scored by a player who, up to that point, had netted just once in a year and a half in English football.

Was it a stunning volley like Matty Burrows’ improvised backheel for Glentoran, or like the Hamit Altintop strike which beat it to the 2010 Puskas Award?

Was it maybe a stunning volley like the murderous rage-hit of a consolation goal scored by Klaas-Jan Huntelaar for Schalke against Real Madrid just one month earlier?

No, it was none of those things.

When you’re learning football skills as a youngster, there are some things that get taught to you and some that you just pick up as you go along. It’s what ‘Scrubs’ Chris Turk might refer to as “learning by doing”.

Your standard drill might see a coach fire the ball towards you at pace and ask you to bring it down instantly. Or it might involve a cross being floated over to be hit first-time on the volley.

Or perhaps the ball will be punted up in the air, slightly out of reach of two players arriving from opposing directions, with the pair of them required to compete for the loose ball.

Tettey’s goal was somehow a combination of all three drills, and yet nothing like any of them, all at the same time.

Tettey is unlikely to be offended if you don’t consider him a natural goalscorer. His most prolific season (if you can call it that) saw him find the net five times for Rosenborg in 2009. 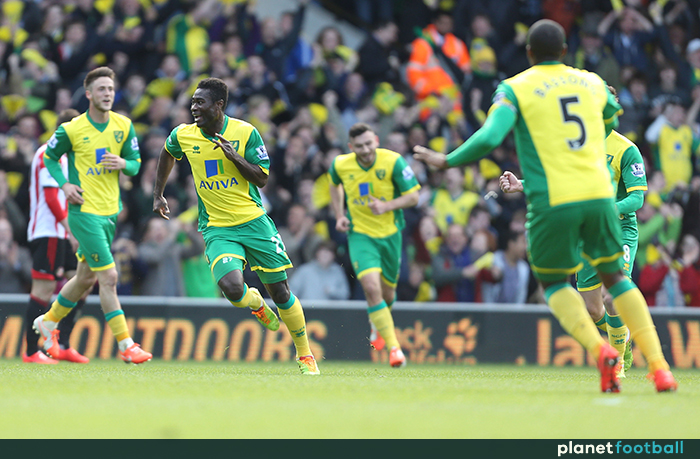 But that doesn’t matter. Or rather, it matters in a different way to the way you’d think it might.

In fact, a natural goalscorer does not have to run onto the ball, almost like a middle-distance runner using a surprising surplus of energy in the home straight. Instead, he is already there, having anticipated the flight of the ball long before it even leaves the head of John O’Shea.

You know what, I’m going to go one further. A natural goalscorer brings the ball down and realises he’s unlikely to score from there, so he sends it out wide and makes a run into the box before looking to get on the end of the delivery.

A natural goalscorer does a lot of things, but he doesn’t do this.

On this day 3 years ago, Alex Tettey did this vs Sunderland: #ncfc pic.twitter.com/W43neJlbX3

There’s barely an angle for a shot from where Tettey is standing. The nearest defender covers off the obvious route to goal, while the advancing O’Shea and Phil Bardsley – not to mention Tettey’s own team-mate Johan Elmander – take up whatever space isn’t covered off by Vito Mannone in the Sunderland goal.

There’s nowhere to aim for, it would need a real fuck-up from Mannone, or a massive deflection, to have any chance of g…

Or he could do that, I guess. Yeah, that’ll work too.

Goal of the Season that year went to Arsenal’s Jack Wilshere, who rounded off a stunning team move against Chris Hughton’s men in October, just two days before Pajtim Kasami’s inexplicable decision to try doing this with his wrong foot.

Oh, and two weeks before Tettey’s goal, Sunderland watched on as Tomáš Rosický did what’s known in footballing circles as ‘taking the piss’.

Some of Tomas Rosicky’s best goals for Arsenal. 💥🚀

A bit like another long-range goal from a Norwich midfielder who rarely found the net, as it happens.

Here you go, have this Youssef Safri goal for free, as a little Easter egg.

Thinking about Norwich reminds me of Youssef Safri’s 40-yard screamer against Newcastle back in 2005. This goal isn’t talked about anywhere near enough. pic.twitter.com/DbrJS8gPUF

It went in off the bar, which makes it slightly better than Tettey’s – that’s just science.

Chris Sutton on why he left Norwich City for Blackburn