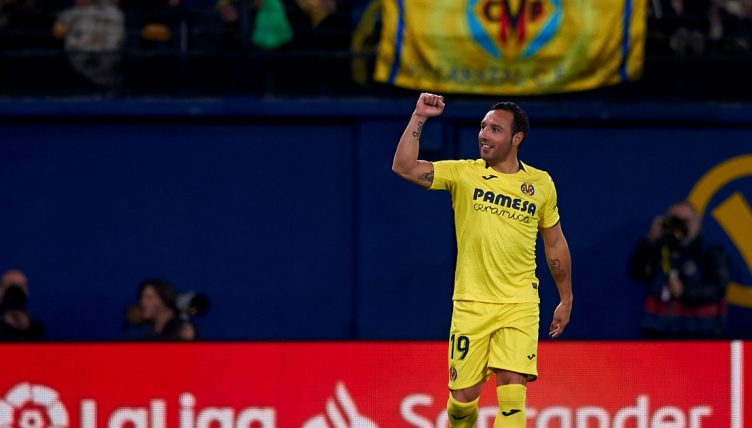 When Santi Cazorla limped off the pitch in Arsenal’s 6-0 win over Ludogorets in the Champions League in October 2016, little did he know that would be his last appearance for the club.

Nearly two years of painful surgeries and injury rehabilitation followed, during which time doctors had to take skin from his arm to stop his foot from being amputated.

It seemed certain that Cazorla would never kick a ball again, and he departed North London when Arsene Wenger did, denying the chance for him to say a proper goodbye to Arsenal.

“If you get to walk again with your son in the garden, be satisfied, they told me,” Cazorla revealed to Marca in 2017.

He seemed to be over the worst of his injury struggles and was able to finally run again, but this was still a long way from being able to play top-level football, and most clubs wouldn’t have taken a chance on an injured 33-year-old.

This is where Villarreal came in.

The club where Cazorla had spent two successful previous spells over the years had offered him a chance to see what he was still capable of.

Cazorla in his heyday was capable of magic on both feet, so naturally, he was revealed to an excited crowd of Villarreal fans by a magician.

Wish the Little Magician was still an Arsenal player 😭 pic.twitter.com/CnLxhrscOf

Whilst Cazorla’s homecoming was a special moment in itself: a Villarreal icon had returned to the club seven years after he departed for Malaga, there was little expectation that he would hit the heights he reached when he previously graced La Liga with his sublime technique.

He exceeded them all, by a mile.

The shining star amongst the darkness

Cazorla made his first La Liga appearance when he started against Real Sociedad in August 2018, but could not prevent Villarreal from succumbing to a 2-1 defeat at home. Nevertheless, he had already made a significant impact.

By simply playing, and playing well, for 72 minutes, the return of Santi Cazorla had been announced to the world.

However, despite the excitement surrounding the comeback of a club icon, Villarreal were not in good shape. The team struggled to pick up results, whilst the performances were often turgid.

Winning just three of their first 15 league games of the season, manager Javier Calleja was sacked, and Villarreal were worryingly close to the relegation zone. Although they progressed to the knockout rounds of the Europa League, new signings Gerard Moreno and Ramiro Funes Mori had failed to hit the ground running.

Calleja’s replacement, Luis Garcia Plaza, failed to win any of his six La Liga games in charge, but it was during his short tenure where Cazorla fully confirmed that he was still capable of the extraordinary.

Shortly after the new year, Villarreal hosted Real Madrid at Estadio De La Ceramica, and there wasn’t much optimism against the European Champions. However, Villarreal gained an unexpected point in a 2-2 draw.

The scorer of both goals? Who else but Cazorla.

Both strikes, one to take the lead early on, and one to equalise in the final ten minutes, encompassed what Cazorla was all about.

Not only did he step up when he was needed most, but he did it in style. His first goal came within the first five minutes; Samuel Chukwueze drove at the Real Madrid defence and threaded a ball through to Cazorla on the edge of the box.

The Spaniard knew exactly where the ball was going to end up before he’d even touched it, and curled an exquisite first time shot around Thibaut Courtois into the bottom corner, before wheeling away with his trademark kiss of the wrist celebration.

Meanwhile, Santi Cazorla just did this against Real Madrid. pic.twitter.com/9V8AqCBAGZ

This was his first goal in nearly three years, and one that meant the world to him, but he wasn’t done yet. After Karim Benzema and Raphael Varane had put Real Madrid back in front, another defeat seemed on the cards for the Yellow Submarine, and being in 17th position before kick-off, the threat of relegation had never been higher.

Just when all hope looked gone, Cazorla came up with another moment of brilliance.

Pablo Fornals floated in an inch-perfect cross into the box, and despite being the shortest player on the pitch, Cazorla was in the box to nod it in, and when it comes to Cazorla, even a close-range header has to have panache.

Leaping like a kangaroo to meet the ball in the air, Cazorla headed the ball downwards, with such precision that the ball bounced through the legs of Courtois, leaving the keeper bamboozled on the ground whilst the stadium erupted.

Even though Villarreal only gained one point, Cazorla had given the club something worth much more: belief.

Villarreal started to pick up results, but a late collapse saw them lose 3-2 to 18th placed Celta Vigo after going 2-0 up, and the confidence within the squad was starting to break. When Barcelona headed to Estadio De La Ceramica and went 2-0 up within 20 minutes, the team looked consigned to relegation.

Cazorla then put on a masterclass, and Villarreal sprung into life as a result, hitting four goals before the 80th minute, and a famous win was on the cards.

That was until their hearts were broken by yet another late collapse. Lionel Messi scored an outstanding free-kick, and in the 93rd minute, Luis Suarez equalised with a weak foot volley to stun everyone inside the stadium.

It could not possibly get worse than two late collapses in two games when victory looked assured. Until the very next game away at Real Betis.

Villarreal found themselves 2-1 down at Benito Villamarin, but a handball from Marc Bartra offered Cazorla to equalise from the penalty spot in the 90th minute, a goal which would have lifted his club out of the relegation zone.

Sending the ball straight down the middle, Pau Lopez called his bluff, and caught the ball easily. Villarreal lost, and spirits could not possibly get any lower. Cazorla was devastated.

After all the top class performances to drag Villarreal through games before, it was him who had missed when he simply had to score. Everyone watching was heartbroken, and even more so when a clip of Cazorla in tears at full time emerged after the game.

Santi Cazorla after his missed penalty for Villarreal tonight 😢💔 pic.twitter.com/PIEljwiNjf

Villarreal had just seven games left to save their top-flight status, and even the constantly smiling Santi Cazorla looked down and out.

The feeling was that Villarreal would continue to crumble, and sleepwalk into the Segunda Division in the same season where they reached a Europa League quarter-final. However, the disaster at Real Betis snapped Villarreal back into life.

Three wins in a row followed, and Cazorla assisted the winning goal in two of these victories. The mental resilience he had shown to recover from such brutal injuries was on full display again. Villarreal survived.

Cazorla ended his first season back with seven goals and 11 assists in 46 games, but the best was yet to come.

His final season in European football was nothing short of a glowing success. Despite the season being halted due to the covid-19 pandemic, Javier Calleja’s side had finally organised themselves and were playing the vibrant football associated with Villarreal teams of old.

Gerard Moreno was finally delivering on his price tag after a disappointing first season back at the club, but it was Cazorla who was the star of the show.

Yet again managing to make 46 appearances during the season, the veteran notched up an astonishing 17 goals and 13 assists, one of the best tallies of his entire career. His talent alone would be worth the entry fee at Villarreal.

Touch of the season & the final goodbye

When La Liga returned after lockdown, Villarreal turned on the style, with Cazorla the heartbeat of the silky passing football on display, and the very peak of this came in the derby against Valencia.

Linking up well with Gerard Moreno, one magical touch from Cazorla was enough to destroy Villarreal’s neighbours, and wow the footballing world.

A long ball from goalkeeper Sergio Asenjo found its way to Cazorla, and he met the 40-yard pass with a touch of gold.

The ball never touched the ground, as with a cushioned pass, Cazorla sent the ball directly to Moreno in the box with his left foot, who volleyed home with aplomb.

Santí Cazorla with an absolutely delicious assist for Gerard Moreno to put Villarreal 2-0 up against Valencia.

The Spanish wizard made it look so easy, but it was anything but, and when the ball hit the back of the net, it was the assister, not the scorer, that everyone ran towards.

Cazorla’s final farewell could not be more fitting. Following in the footsteps of his miraculous return was club legend Bruno Soriano, who also came back from a few years of injury nightmares for one last goodbye.

Both players were substituted off and given an emotional farewell from both teams on the pitch, and as the Villarreal players hoisted the midfielder into the air, there was a realisation that Cazorla’s comeback had come full circle.

“Villarreal has given me everything,” Cazorla said in a video posted by the club on social media when his departure was announced. “At 18 they took a punt on a boy from Oviedo who knew nobody.”

Villarreal gave him his chance as a teenager, and his remarkable recovery, and in turn, his contributions gave Villarreal Europa League football, which they would go on to win without him.

He had been through battles with his body and with relegation, but when he departed, he became immortal in the eyes of everyone at Villarreal, with his name forever written into the history books of Spanish football.