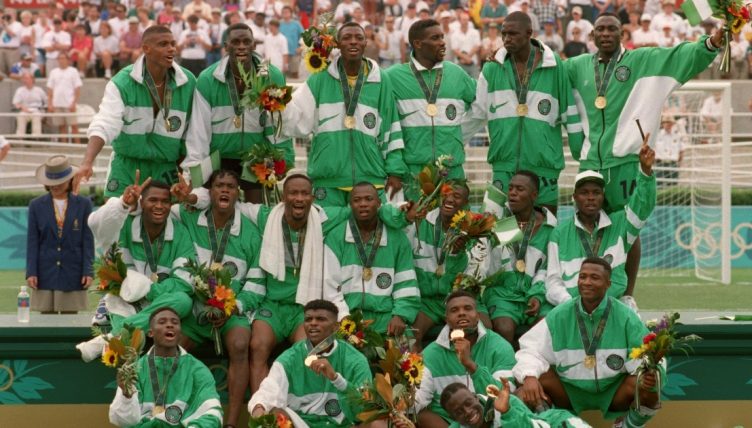 Nigeria’s vaunted group of 1996 had not received the memo. Never had an African team dared to attain success at the men’s Olympic football tournament. Never had the West African nation thought it was within the realms of possibility.

Up until then, only Ghana had even claimed a medal at the Games, winning bronze four years earlier in Barcelona.

Nigeria had never made it past the group stage of the quadrennial competition. In 1996, they recorded history and then some.

In truth, this was a talented group on paper, captained by the wunderkind that was Nwankwo Kanu, fresh from successive Champions League finals at Ajax under Louis van Gaal in 1995 and 1996, claiming the title in the former.

The lanky frontman may have only been 19 at the time, turning 20 during the competition, yet his decisiveness was at odds with his youth, demonstrated by the unerring finishes and unflustered efficiency.

The opening goal against Hungary – Nigeria’s first opponent of the tournament – was a sign of what was to come. Kanu’s forward thrust in possession had attracted three players and he sent a pass to Daniel Amokachi in the inside-right channel.

Not one to admire his pass, the gangly forward did not stop but continued his run and received a flicked pass from ‘the Bull’ before coolly slotting the one-time finish past Szabolcs Safar just before half-time.

It was a worthy goal to win any game, but Kanu’s heroics were unrelenting.

Despite the absence of open-play goals in the following games against Japan and Brazil – a 2-0 win and 1-0 loss, respectively – the Dream Team made it to the knockout rounds for the first time in the nation’s history.

They faced Mexico in the quarter-finals, a game that is remembered for the red cards and nearly identical kits.

Jay-Jay Okocha opened the scoring with a low drive from around 25 yards with 20 minutes played, and Celestine Babayaro made sure of the success with six minutes of normal time remaining, capitalising on a loose ball inside the area following a corner.

Nigeria were in unfamiliar territory. Making it past the group stage was a pre-tournament fantasy, finding themselves two games away from winning the entire thing was utterly exciting.

While a Brazil side that comprised greats like Ronaldo, Rivaldo, Bebeto and Roberto Carlos had denied us a West African derby between the Dream Team and Ghana, Kanu and his teammates sought revenge against the Selecao, having already lost 1-0 in the final game of the group.

One minute in and it seemed the side in green and white were overawed by the occasion, falling behind early on. After 38 minutes had been played, Nigeria were 3-1 down. Hope was slowly slipping away.

A comeback was an increasingly slim possibility, with an acceptance of defeat gradually spreading among Super Eagles fans. Brazil had conceded four times hitherto that semi-final and were not especially solid defensively, but it would have taken an eternal optimist to point it out.

What ensued after half-time was extraordinary – and served to suggest a maiden Gold was written in the stars. It was not just the fact the Dream Team turned it around that caught the eye, rather how they roared back from what looked like a certain exit.

Overly inattentive marking meant the fleet-footed Victor Ikpeba, who went on to claim the 1997 African Footballer of the Year award, sent a well-placed effort into the bottom-right corner beyond the motionless Dida with 12 minutes of normal time to play. Game on.

In the dying embers of the game, with the South American nation already thinking they had done enough to hang on, Kanu had other ideas. Cometh the hour, cometh the man.

Okocha’s long throw caused chaos. A scuffed Teslim Fatusi effort fell to a waiting Kanu who had the presence of mind to deceive Dida with a clever flick and then level at the death.

“We wanted to give everything but nobody believed we could turn things around after we were down at 3-1 towards the end of the match,” Kanu recalled to CAFOnline.com last year, 25 years after his masterful showings as captain of that side.

“The pressure was really on us when we got to the semi-finals to meet Brazil again because they had beaten us in the group stage.”

Four minutes into extra time, the comeback was complete. After a coincidental touch saw the ball drop at Kanu’s feet, the skipper feigned one way deceiving two Brazil defenders before firing a left-footed shot past Dida to win the game for Nigeria.

The celebration that followed was as iconic as the goal itself.

“Beating Brazil was very important and it was like we had already won the trophy though we were yet to play the final against Argentina,” the ex-Arsenal star stated.

This was an Argentina side that boasted the likes of Roberto Ayala, Javier Zanetti, Hernan Crespo and Diego Simeone.

In a sense, it would have been strange had the final against Argentina been straightforward. Some might reckon boring.

Again, Nigeria had to do it the hard way, coming from behind. Twice.

Claudio Lopez sent the South American side into a third-minute lead, but Babayaro levelled just before the half-hour mark. The concession of a penalty five minutes after half-time saw Nigeria fall behind yet again. Yet, bouncebackability was that side’s watchword.

Babayaro’s throw-in was not cleared and the ball fell to Amokachi whose exquisite lob saw the Dream Team peg back the Argentina side for the second time on the day with 15 minutes left on the clock.

It seemed like another nervy extra time approached for the Dream Team, but they were gifted what proved to be the winner in utterly bizarre circumstances.

Rather than simply defend the free-kick, the Albiceleste pushed up, attempting to play the Nigerians offside.

Emmanuel Amuneke was the beneficiary of the South Americans’ dreadful decision in the final minute of the game, sending the players into raptures: 3-2. All they had to do was hold on for Pierluigi Collina’s whistle.

Nigeria vs Argentina in the Olympic Final 1996. pic.twitter.com/jCO3XBLLCu

“The winning goal against Argentina was an important goal scored in my entire football career,” Amuneke who moved from Sporting Lisbon to Barcelona after Atanta 96, told CAFOnline.com in 2021.

“But above all, it was the goal that gave us the soccer gold medal. I have a fond memory of the final against Argentina because I came on a substitute and was able to contribute my part to the success of the team.

“Being able to score the winning goal against Argentina will forever be in my memory.”

Not considered favourites, not even given a chance, the Dream Team’s unprecedented success will live long in the annals of African football.

That group inspired an entire generation of millennials who desired to copy Kanu’s style and goal celebrations while imitating Okocha’s dexterity.

The Nigerian media scornfully labelled that side ‘dreamers’ before the competition. Undaunted by all the derision, the nation’s Golden Generation of players reigned supreme at the Games against all the odds.

It was a mammoth triumph for the entire continent. It remains arguably the greatest moment in Nigerian football, owing to the timing which lessened the agony of a politically turbulent period in the West African nation.

Nigeria’s great entertainers will never be forgotten. How could they be?