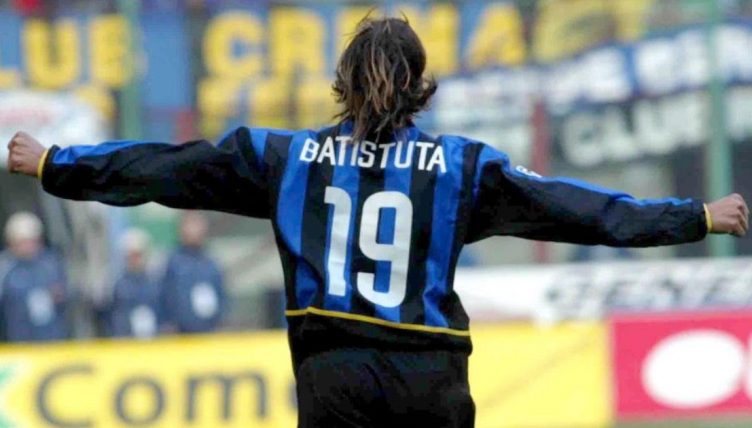 Gabriel Batistuta is remembered for many things in football but his ill-fated six month loan stint at Inter Milan probably isn’t one of them.

Consigned to the status of footnote in an otherwise glittering Serie A career, much of that has to do with goals, or rather, a lack of them.

Though he won a Scudetto with Roma to add to the Coppa Italia captured with his beloved Fiorentina, what made Batistuta such an icon of the Italian game were his goals.

The Argentine hit double figures for ten consecutive seasons in Italy, where his explosive pace and thunderbolt of a shot made him one of the most feared marksmen in the land.

That was the Batistuta Inter Milan owner Massimo Moratti thought he was getting in January 2003, rather than the injury-prone and out-of-form Argentine who arrived at the San Siro fresh from a miserable year-and-a-half at the Stadio Olimpico.

Not that Moratti bothered to check the fine print on his purchase, so consumed was he with securing the services of a striker who had proven elusive in the years prior. Inter had been pursuing Batistuta since as far back as 1995 and had been frontrunners to land the Argentine when he signalled his intention to leave Fiorentina in the summer of 2000.

“Batistuta prefers Inter,” his agent, Setimo Aloisio, told reporters. “We had dinner with Massimo and the negotiations went very well. I would say that Inter is the most likely option.”

Fast forward a couple of weeks, however, and the 31-year-old had a change of heart, after AS Roma manager Fabio Capello and sporting director Franco Baldini convinced club president Franco Sensi to fork out the €36.2 million required to land his services.

“We talked with Sensi,” Aloisio explained. “Gabriel realized that Roma have special fans, and this is very important for him.”

The honeymoon is over

By 2003, the honeymoon in Rome was very much over. Though Batistuta had succeeded in firing the Giallorossi to a first Scudetto since 1983 in his debut season, the years that followed had been beset by injury and a loss of form.

Roma finished the 2001-02 campaign just a point behind Juventus but might have fared better with a fully-fit Batigol, who managed a meagre six goals across a Serie A season marred by hamstring issues.

The 2002-03 campaign followed a similar pattern, with Batistuta a shadow of his former self following a summer in which he spearheaded Argentina’s disastrous group-stage exit from the World Cup.

In truth, a January move to Inter reopened these wounds. That summer, Argentina manager Marcelo Bielsa drew criticism in some quarters after preferring Batistuta to the in-form Hernan Crespo as his team’s lone striker.

Crespo had led the line for the Albiceleste in World Cup qualifying and outscored Batigol in Serie A with Lazio but found himself warming the bench while Batistuta floundered up front in Japan.

Batistuta retired from international duty soon after but a loan move to Inter reignited the rivalry. Crespo, who had signed for the Nerazzurri that summer as a replacement for the Real Madrid-bound Ronaldo, had picked up a long-term injury ruling him out until April.

Batistuta was essentially being drafted in as his temporary replacement. Comparisons with Crespo, who had made an impressive start at San Siro, were inevitable.

Throughout his time at Inter, Batistuta faced repeated questions about the rivalry but rejected any notion of bad blood.

“Our coach [Bielsa] put us against one another and this was wood for the fire,” he said. “We have always trained together and there has never been any problem between us.”

Moratti nevertheless managed to sell him on the idea of joining Inter and the lure of winning another Scudetto to add to the one won in Rome after a career of near-misses with Fiorentina.

It’s the winning that counts

Years later, Batistuta would admit that the physical exploits of his career to that point had begun to take their toll on his knees and ankles but, initially at least, there was some room for optimism about the move.

Batistuta’s debut for Inter against Empoli was an encouraging one with the Argentine lively throughout and proving an effective foil for Christian Vieri, who bagged a hat-trick thanks in part to Batigol who notched up an assist.

The fact he failed to score on his debut was no reason to panic, he insisted, despite scoring on his first starts for both Roma and Fiorentina. 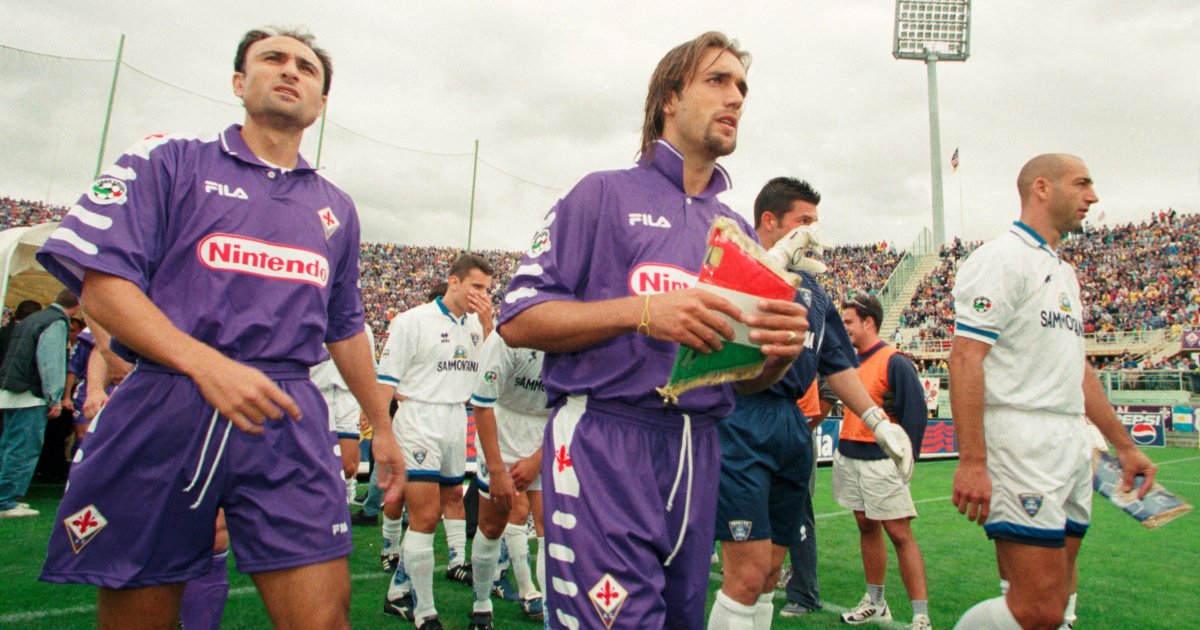 “What counts is only winning, not who scores,” he told reporters. “I came here to win the Scudetto. It was important to blend into the squad, and I didn’t have to arrive telling everyone I was Batistuta.”

More near-misses followed against Torino but despite linking up well with the likes of Mohamed Kallon in his next outing against Reggina, Batistuta found himself making the headlines for all the wrong reasons after he was accused of deliberately elbowing Reggina defender Ivan Franceschini in the head.

“It was clumsy, yes, but not violent,” he insisted afterwards. “There wasn’t any violent intent. I was just trying to gain my position.” Initially banned for two games, while that suspension was ultimately reversed, the episode did little to help Batigol’s increasingly fragile confidence.

The fact was that, despite Batistuta misfiring in front of goal, Inter were still winning. It was only after defeat to Chievo that questions began to be asked of a player who had not earned the nickname Batigol for his perceptive range of passing.

“The first thought is not that of scoring,” he insisted in a post match press conference. “I have come to Inter to win the Scudetto, not to score fifteen or twenty goals. I didn’t play too well yesterday and that can happen, but the goal will come sooner or later.”

Regardless of his physical state or impact elsewhere on the pitch, Batistuta was struggling to escape the reality that he had been signed, primarily, to score goals and was not doing his job.

That criticism would become deafening next time out against Piacenza where the Inter fans began booing the Nerazzurri’s every touch after 60 goalless minutes in the San Siro against the relegation contenders.

Thankfully, on this occasion, Batistuta found the necessary touch to silence the baying mob, albeit in fortuitous circumstances, after deflecting a speculative Stephane Dalmat shot past Francesco Zerbini.

The wild celebrations that followed among Batistuta and his teammates, each of whom were eager to embrace the Argentine, told their own story: the pressure had been building.

“I wanted this goal for the whole environment,” he said after the 3-1 win. “It isn’t easy to play when your own fans whistle. I think everyone here wants to win, and for this result everyone is important – the fans, the players and the club. If someone is having difficulty we just have to stretch out our arms and carry him forward.”

Yet hopes of that result providing a springboard to bigger and better things were extinguished next time out after a comprehensive 3-0 defeat to title rivals Juve. Batistuta, so often a thorn in the side of the Bianconeri, was a ghost of his former self.

He would go on to score his 200th and final goal in Italian football against Como a few weeks later, a neat finish around the goalkeeper that was reminiscent of the Batistuta of old.

🎂 | All the best to one of the greatest centre-forwards in the history of football. Happy Birthday #Batistuta!

Yet questions remained as to whether he could ever truly rediscover the form of old, when he was capable of taking a game by the scruff of the neck and forcing an outcome.

There would be one last chance to change the narrative against his former employers Roma. Benched after a poor display in a defeat to Udinese, Batistuta found himself targeted by Roma President Franco Sensi in the build up to the game, who told Gazzetta Dello Sport that they had sold Inter “a dummy.”

“We really paid a lot for him, he produced a good first season and helped us to win the title but the second and third seasons were a debacle,” he said. “I shouldn’t say it, because he is a professional player but I reckon he’ll play another two months in Italy and then no one will see him again.”

His comments set the stage for a pulsating encounter which finished 3-3 but could have ended in Inter’s favour had Batistuta, on as a late sub, converted a last gasp strike that cannoned off the inside of the post. Score and Batistuta would have written another chapter in his glorious Serie A story, regardless of what came before or after.

He would have silenced Sensi and kept Inter in the hunt for the Scudetto he so desperately craved. But he missed, vindicating the Roma president’s remarks and leaving Inter five points adrift of Juventus with hopes of a first title since 1989 fast fading.

“I’m disappointed about hitting the post in the final minutes,” Batistuta said afterwards. “The things said against me have hurt me, not just for the sake of it, but because these things were said. I’m regretful.”

Any lingering hopes of Inter winning the title or Batistuta becoming a success were extinguished by defeat to AC Milan. By then Batistuta was firmly relegated to the role of bit-part player, coming off the bench for a few minutes at a time.

With the writing very much on the wall, Batistuta took aim at manager Hector Cuper, criticising the coach for adopting a system that incorporated him, Vieri and Alvaro Recoba to mixed effect.

“In the last few games I am disappointed, along with the rest of the team, with the displays we have put in,” he said. “I think the tactic of playing with three forwards has not worked out. The team is built for 4-4-2, and we can only get away with playing the more attacking line-up at home.”

That criticism ignored the main issue that dogged Batistuta: his body was breaking down and could no longer handle the demands of the game he loved.

Batistuta’s final appearance for Inter would come against Brescia, where an ankle injury forced him off after just 45 minutes. He would never recover and, ironically enough, never take to the pitch alongside Crespo, who regained his fitness in time for the final stretch of the season.

He left Inter having managed a goal every 412 minutes for the Nerazzurri, a poor return compared with rising stars at the club like Obafemi Martins who scored once every 264 minutes.

Speaking about the experience years later, Batistuta expressed regret over the move, admitting that his “ankles were already in bad shape” by the time he arrived. “It was Massimo Moratti himself who convinced me to join them,” he said. “There was a lot of respect among us and I am sorry I did not give him more.”

Yet for all the anonymity of his time at Inter, Batistuta still showed flashes of the old genius, moments of the magic that made him an Italian football legend. It was a failure, but a glorious one.