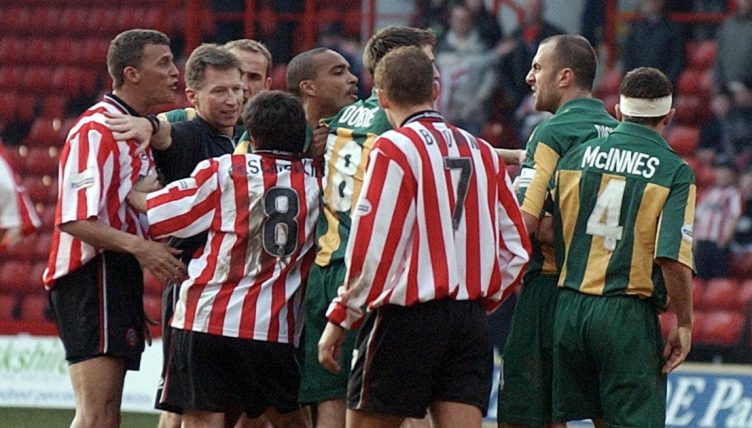 It isn’t often that a Sheffield United v West Brom game receives national attention, but 20 years on, we’re still talking about the Battle of Bramall Lane from 2002.

Going into the March 16 fixture, few could possibly have predicted what was to come. West Brom were going for promotion to the Premier League, but Sheffield United were marooned in mid-table with nothing to play for, and there was no history between the two teams to suggest this would be anything other than a run-of-the-mill afternoon.

But the reality was quite different.

The first moment of drama came in the ninth minute when United goalkeeper Simon Tracy was sent off for handling outside of his area, with Scott Dobie putting the visitors ahead nine minutes later.

But that was the way things stayed until the 63rd minute when Derek McInnes made it 2-0 to Albion with a brilliant goal from outside of the area. Two goals and one man to the good, that appeared to be that.

Clearly not giving up, however, was Blades boss Neil Warnock, who made a double substitution a minute later in a bid to inject a bit more fight into his team, bringing on Patrick Suffo and Georges Santos.

The previous season, Santos had suffered a fractured cheekbone following an elbow from West Brom’s Andy Johnson, then of Nottingham Forest, and if the instructions from Warnock were to get stuck in, he didn’t need a second invitation.

Indeed, within a minute of his introduction, Santos saw a short pass to Johnson and decided to, erm, intercept it with one of the most outrageous tackles you’re ever likely to see.

Referee Eddie Wolstenholme understandably pulled out his red card immediately, but for some reason the home players felt they had been treated harshly and a wonderful melee ensued, with the Blades’ other sub, Suffo, headbutting McInnes and also seeing an immediate red.

With United down to eight men and having made all three substitutions, Wolstenholme told us on The Broken Metatarsal he felt then it would be difficult to get the game finished.

“It was an easy decision (to send off Santos),” he says, “I’ve never seen a challenge like it.

“Then when I’m stood at the side of McInnes and Suffo came across and headbutted him, I thought ‘there’s going to be mayhem here’ because three substitutes have already been used and there are three already off.

“I actually felt inside then it was going to be difficult to finish the game. It just didn’t feel right the way it had gone. The temperature rose so much after that.

“The atmosphere between the players was just so bad, I’m just thinking ‘this is going to be tough to finish’. It just didn’t feel right…about four players had to hold back Darren Moore because he was so incensed by what had happened.

“The atmosphere had just gone up. It was every challenge, the crowd was up so I got the famous song that I’m a banker. That was constant. You just had that feeling that something wasn’t right.”

Trying to finish the game

Keith Curle could also have been sent off for appearing to land a punch on McInnes, and Wolstenholme admits he definitely should have sent off Michael Brown for a second booking, but by this point he was desperate just to get to 90 minutes.

“The decisions I made weren’t even difficult, they were straightforward,” he says. “The most difficult ones were not cautioning Michael Brown for a second yellow, and cautioning Keith Curle when I could have sent him off. I thought, ‘I want to get this game finished’.

“When the foul went on McInnes from Brown, McInnes ran to me pleading not to send him off, saying ‘it’s nothing, it’s only a pull’. And then he went off injured within about two minutes of it.

“He just said he couldn’t continue and went off injured. I’m thinking, ‘I’ve got problems here’.”

That reduced United to seven players with 11 minutes plus stoppage time – of which you’d assume there’d have been plenty – to go. But just three minutes after Brown limped off, Rob Ullathorne also informed Wolstenholme that he couldn’t continue and, remarkably, the game had to be ended there and then.

“I did tell him, if you go off, you do know this game has to be abandoned,” Wolstenholme says. “He said he can’t carry on and I said, ‘well that’s it then’.

“When I was in the dressing room afterwards, the assessor came in and I nearly drowned myself because he did tell me when I was in the bath that I’d missed a caution on Michael Brown and he should have been sent off.

“I thought, ‘brilliant, I’ve just had World War III on my hands and I’m being told I missed a caution’.

“After the game I got a phone call from a newspaper within 10 minutes offering to buy the story on it, which I refused straight away obviously because I didn’t think it was credible to do anything like that and I wanted to carry on my career.

“We finished in the 83rd minute and I think it’s the latest I’ve got home from Sheffield. I arrived home about 10 o’clock. My daughter was a teenager then and it was like somebody had bombed the place. I couldn’t believe what a mess she’d left it in.

“So I was more steaming about that because there was nothing I could do about the other circumstances.”

Listen to the full interview with Wolstenholme below, including him revealing he got a standing ovation before his next game at Sheffield Wednesday, on the latest episode of The Broken Metatarsal in which we also remember some of Warnock’s other memorable moments of the 2000s.

You can also find us on Audioboom, Apple Podcasts, Spotify, CastBox, Deezer and RadioPublic among other providers, where you can hear plenty more episodes in which we celebrate the best of noughties football.

This article was originally published in March 2020.