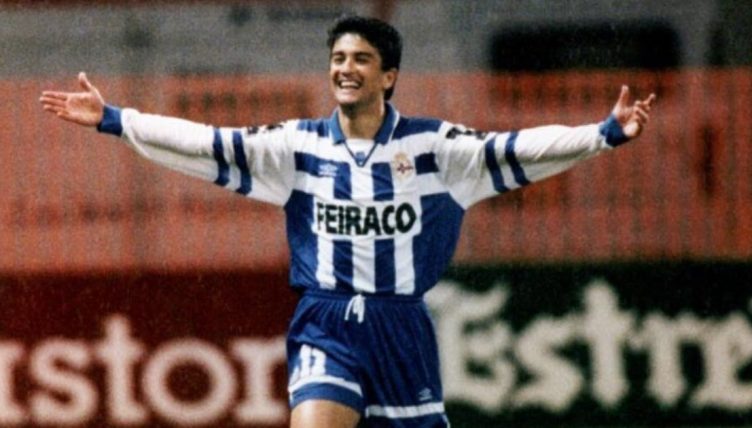 For some football fans Jose Roberto Gama de Oliveira, or Bebeto as he was better known, will always be remembered for that goal celebration.

Just two days prior to Brazil’s 1994 World Cup quarter-final against Netherlands, Bebeto’s wife Denise had given birth to his son, Mattheus.

Eager to mark the occasion after scoring against the Dutch in the scorching Dallas heat that day, Bebeto ran to the sideline where he proceeded to bring his arms together as if rocking an imaginary baby.

In a brilliant moment of spontaneity, team-mates Mazinho and Romario joined in, either side of the diminutive frontman, to create one of the most iconic images of USA 94.

It helped galvanise the Selecao after criticism over manager Carlos Alberto Parreira’s defensive approach, united Bebeto with rival-turned-team-mate Romario like never before and reinforced Brazil’s status as media darlings of the beautiful game.

Brazil’s sixth-highest goalscorer, Bebeto’s tally of 39 goals in 75 international appearances make him worthy of mention in any discussion around the true greats of the Brazilian game.

Yet despite a litany of achievements at international level, Bebeto’s brilliance for the Selecao was often overshadowed by the presence of the overbearing Romario.

A clean-living Christian who valued his family life above all else, Bebeto was essentially the Ned Flanders to Romario’s Homer Simpson; the straight man to his volatile, hilarious and occasionally brilliant Selecao teammate. Fans naturally gravitated towards the latter.

As Romario himself once put it: “Bebeto is a family type, stay at home. I’m a street cat.” But while Romario dominated the headlines, both good and bad, for Brazil, Bebeto more than held his own at club level, particularly in Europe with Deportivo La Coruna.

The rise of Super Depor

Arriving at the Riazor in the summer of 1992 along with Brazil teammate Mauro Silva, Bebeto helped usher in the era of “Super Depor” under club president Augusto Cesar Lendoiro and manager Arsenio Iglesias.

And by the time he returned to his native Brazil four years later, he had also written himself into the La Liga history books too after scoring five goals in a single game.

Bebeto’s first three years at the club ran the gamut from triumph to tragedy and back again.

He claimed the Pichichi award as Spain’s top scorer with 29 goals in 37 games during his debut season, yet found himself cast firmly in the role of villain a year later after refusing to take a last-minute penalty on the final day of the season against Valencia with Depor needing a win to claim their first-ever title.

Defender Miroslav Djukic stepped up in his place and duly missed to hand La Liga to Barcelona and, worse still, Romario, who had spent much of the season referring to his then-rival Bebeto as ‘chorao’ – meaning ‘crybaby’ – on account of his habit of complaining to referees.

At least now he had a valid reason to cry.

READ: ‘Super Depor’ to derby defeats in Segunda B: The rise & fall of Deportivo

Thankfully, by the time Bebeto’s third season at Depor began, in September 1994, he had more reasons to be cheerful after starring in Brazil’s World Cup success where he also patched things up with Romario who went into the tournament refusing to even sit next to his strike partner on the plane but ended it with the pair arm in arm.

The 1994-95 campaign would prove a historic one for Depor, with the club finally clinching a first major domestic trophy in the Copa del Rey with a cathartic victory over Valencia, the team that ended their league hopes a year ago.

That victory would mark the beginning of the end for the first cycle of “Super Depor” but not before one final flourish from Bebeto at the start of the following season. By then some of the magic had begun to wear off with Iglesias departing to be replaced by the significantly less popular John Toshack.

From the off, the Welshman did little to endear himself to his Depor charges.

After a 2-1 win over Real Madrid at the Santiago Bernabeu in the Supercopa de Espana, a result which capped a 5-1 aggregate win, he told reporters his team “should feel ashamed” to lift the trophy given how they played in the return fixture.

In the face of such provocation other Brazilian forwards, like Romario for instance, might have booked themselves on the first flight back to Rio – but not Bebeto.

Instead, he did his talking on the pitch. Three goals in Depor’s first four La Liga games that year, including a brace in a 3-0 win over Valencia set the tone with Bebeto also bagging a hat-trick against APOEL Nicosia in the first round of the European Cup Winners’ Cup – but even better was to come.

Lining up against relegation strugglers Albacete in the Riazor on Sunday, October 1, Bebeto could never have known he was about to emulate a feat last achieved by ‘Pichi’ Alonso who famously scored five times for Real Zaragoza against Espanyol in 1979.

What made Bebeto’s feat especially unusual was the timings of the goals themselves.

It took just two minutes for the Brazilian to open his account for the afternoon in spectacular fashion. Connecting with the ball direct from a corner, Bebeto unleashed a perfectly executed scissor kick past the hapless Fernando Marcos in the Albacete goal.

With defender Albert Tomas hobbling off for Albacete a minute later, many assumed the floodgates would open. But they didn’t.

Instead, for the next 81 minutes, Albacete more than held their own. In fact, it was only with the introduction of Mauro Silva, brought on as a substitute for Dmitri Radchenko, that Depor began to regain control of the game.

With just eight minutes remaining, the floodgates well and truly opened, starting with an absolute howler. With Albacete chasing the game, goalkeeper Marcos decided to turn sweeper-keeper, venturing way out of his box to clear a loose ball. Having done the hard work by dribbling past Bebeto, the shot-stopper committed the cardinal sin of clearing the ball straight to the feet of fellow Depor sub Adolfo Aldana.

His long-range effort was then deflected into the path of Bebeto by Marcos, who wasted little time in slotting the ball past a defender on the line into the empty net. Though Bebeto had a largely open goal to aim for he still did well to guide the ball in from outside the area.

A minute later, Depor cut through the Albacete defence again. This time Bebeto’s strike partner Javier Manjarin was the architect of it all, embarking on a Diego Maradona-esque mazy run through the opposition defence before playing the ball to his Brazilian teammate to tap in for his hat-trick.

A sense of pandemonium began to fill the Riazor when, just two minutes later, Bebeto was on the spot once again to tap in following an impressive team move, as blue and white shirts swarmed all over the increasingly fragile Albacete.

The Brazilian then had to wait a whole three minutes to complete his five-goal haul – but it was worth it. Latching on to a fine through pass from homegrown hero Fran, Bebeto proved he was no tap-in merchant, slotting the ball past the onrushing Marcos with a first-time shot to send Depor fans into meltdown.

The fastest player in the history of La Liga to score four goals, Bebeto’s achievement was made all the more special by the fact it was the first time his young son, Mattheus, had attended one of his games.

Bebeto would end the season with 32 goals in all competitions for Depor, his best-ever return at the club, but his season would end with him heading for the exit. Depor’s title ambitions took a serious hit in the weeks that followed with the Coruna side suffering three consecutive defeats to Real Sociedad, Racing Santander and Atletico Madrid.

Matters came to a head for Bebeto a week later when, during an ugly `1-0 win over Sporting Gijon, Toshack opted to haul the Brazilian off.

Bebeto took the withdrawal badly and, in an uncharacteristic move, reportedly insulted his manager’s mother in an ugly exchange on the touchline. Though the pair patched things up to some extent, Bebeto opted to return to Brazil with Flamengo the following summer.

It was a move he lived to regret, with Bebeto eventually returning to Spain with Sevilla. By then Toshack had departed Depor following a dispute over transfers. Despite their differences the Welshman would later rank Bebeto among the best players he ever worked with.

Bebeto’s return to Spain would prove short-lived with the Brazilian eventually returning to his homeland where an uptick in form earned him a place in Mario Zagallo’s Brazil squad for the 1998 World Cup.

Years later and after establishing himself as a politician in his post-playing career as a State Deputy for Rio de Janeiro, Bebeto would declare: “God gave me the gift to score goals.”

The lord truly worked in mysterious ways that day against Albacete.