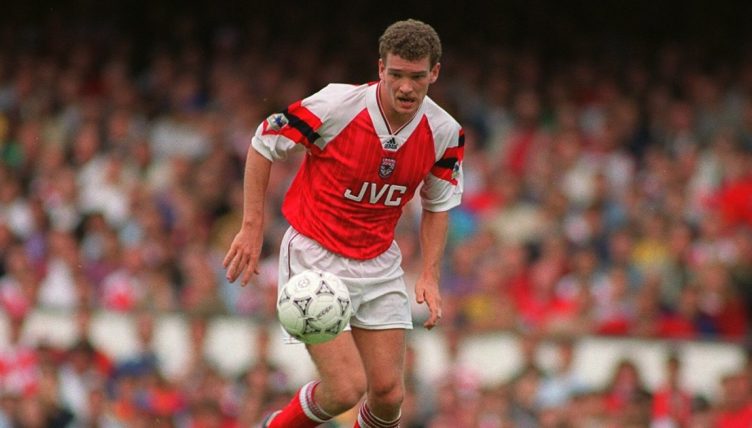 Arsenal have had more talented players than John Jensen, but they have not had many who worked as hard or were as popular with supporters.

Signed after winning the European Championship with Denmark in 1992, Jensen was intended to replace David Rocastle, who had been sold to Division One champions Leeds United. He was the club’s second choice, behind Crystal Palace’s Geoff Thomas.

Jensen had scored the winner as Denmark had stunned Europe by beating Germany in the final of Euro ‘92, and while he didn’t continue that goalscoring form in England, Jensen certainly became a cult hero in north London.

Supporters at Highbury loved his energy and passion, and turned the quest for an elusive ‘Faxe’ goal into a collective mission.

“Firstly I have to say that it was the best four years of my football career,” Jensen says. “Not just on the pitch and in training but off the pitch too. I learned so much in England and it was really enjoyable to be living there.

“But the reason why it was so special is because of the fans. I’d scored in the final in Euro ‘92 against Germany, and I think many Arsenal fans wanted a goalscoring midfielder and thought I was it.

“When I came in I didn’t think people would be expecting me to score 10 goals a season, because I was not that guy at all.” 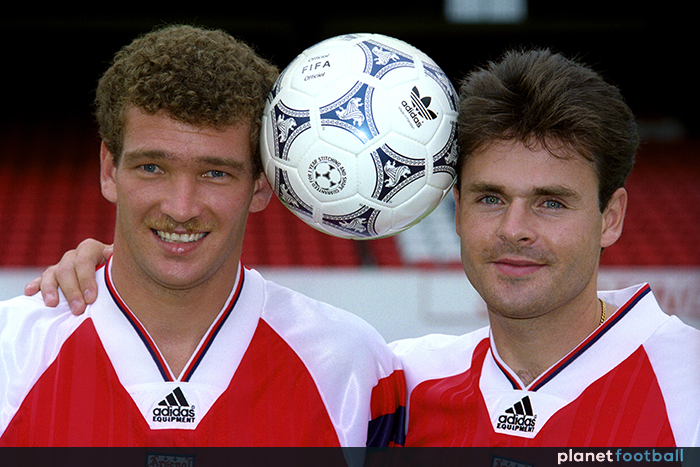 Despite this, Jensen says he was blown away by the support of Arsenal fans.

Although his failure to score became a cause celebre, supporters at Highbury were well aware of Jensen’s selfless role in George Graham’s team.

He finally scored his first Arsenal goal on his 98th appearance, against QPR on December 31, 1994, home supporters urging him to shoot for the umpteenth time. The Dane’s shot found the top corner of the net, and Highbury erupted.

“If I had gone to Italy and hadn’t scored for that long, I’d have been booed off the pitch every time,” Jensen says. “In England it is totally different. The reaction from the fans was absolutely tremendous. That kept me going.

“They respected me because I was working my socks off, trying to help the team to win. They could see the hard work, and that earned me respect.

“But they were always cheering me on to score, even when it took so long. That’s something you cannot achieve in other countries. For me, the British fans are the best in the world.”

Signed for the club by Graham, Jensen would play for a manager continuously criticised as dour.

However, as well as discussing how impressive a manager and coach the Scot was, Jensen is also keen to dispel the notion that the Arsenal team he played in was boring. The reputation, Jensen says, is a misnomer.

“George Graham was what you would call an old fashioned British manager, perhaps the type you don’t see today.

“You got a lot of respect from the manager, but he was very strict and determined to achieve what he wanted to achieve. He had a huge winning mentality, so you had to respect that.

“We were often called ‘Boring Arsenal’, but I think we actually played some fantastic football.

“We had a famous back four and that is why some people thought we were boring, because we were solid. George created and looked after that back four, but he built on it too.

“I sat in front of the back four, being coached by Tony Adams and Steve Bould, who would talk to me the whole time. Then we had Ian Wright and Paul Merson, and Dennis Bergkamp later came in.

“We had so much strength going forward. The mix from Graham was fantastic and that’s why he was a great manager.”

Although Jensen was injured for two of the finals, Arsenal won the FA Cup and League Cup double in 1992-93 and the European Cup Winners’ Cup the following season, also finishing fourth in the second season of the Premier League.

“The key was the dressing room; it was absolutely fantastic,” Jensen says. “The camaraderie was incredible, the way the team were in training and in the games.

“We knew the force and the faults of every player, their weaknesses and strengths, and most importantly we helped each other to eliminate the weaknesses.

“We did have a very good team with quality players, but it was the spirit that was most important.” 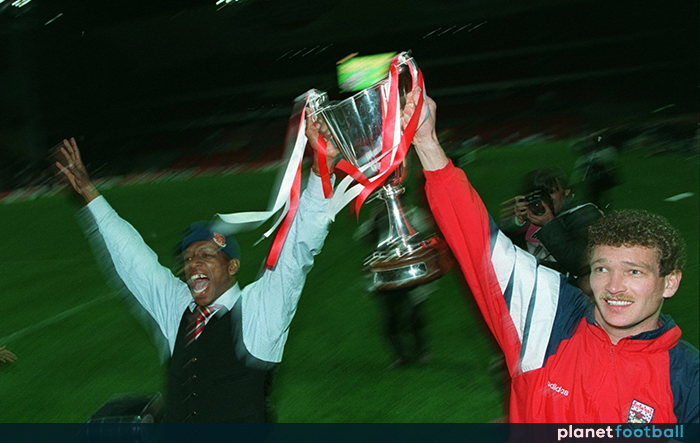 Graham’s tenure at Arsenal would end in 1995 when he was sacked for his role in English football’s bung scandal, eventually being fined and banned from football for a year by the Football Association for his offences.

It was revealed that Graham had taken over £400,000 in payments from Norwegian agent Rune Hauge during negotiations to sign Jensen and Pal Lydersen. Jensen recalls it as a surreal time.

“It didn’t really affect me because it was between the manager and Rune Hauge, but we were surprised that our manager had been punished for taking money,” he says.

“I had nothing to do with anything and what happened between those two I do not know, but George clearly made some mistakes and was punished. As players you just have to keep going.”

Jensen eventually left Arsenal in the summer of 1996, returning to Brondby in Denmark where he had previously won four league titles and was named Danish Player of the year.

Yet October of that same year would see Arsene Wenger arrive in England and effect a footballing revolution.

Having seen the way Wenger extended the careers of Arsenal’s older players, particularly the back four, is leaving the club a decision that Jensen now regrets?

“Definitely. The way Wenger came into British football and the Premier League and changed it, and how he changed Arsenal’s footballing style was suited to me. 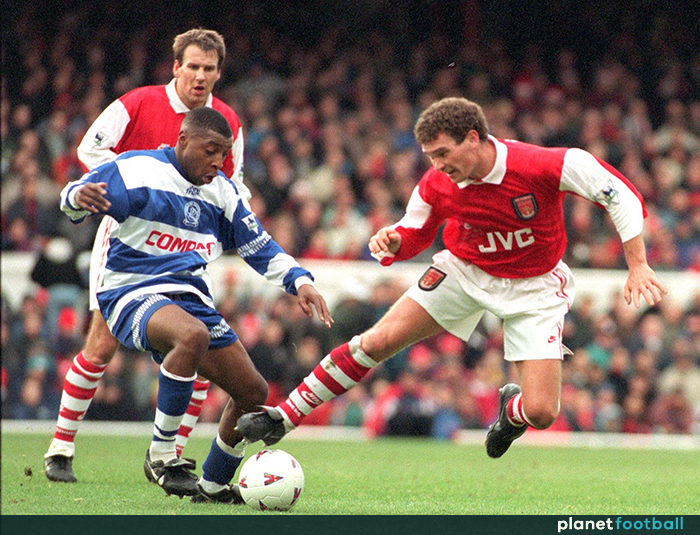 “I was a hard-working midfielder, but I liked to play football and I wanted to keep the ball on the ground. He changed that.

“Of course if I had a chance to do different I would have stayed a year or two to stay with him. Yet my decision was with my family. We wanted to go back to Denmark, put our children in Danish schools, that was why.

“If I look back, I would definitely have had a go at it and see if it worked.”

One of the first things Wenger did in England was to eradicate the famous drinking culture that was present in almost every Premier League club but particularly prevalent at Arsenal.

He introduced nutritionists and individual training regimes, a world away from the social scene Jensen remembers under Graham. 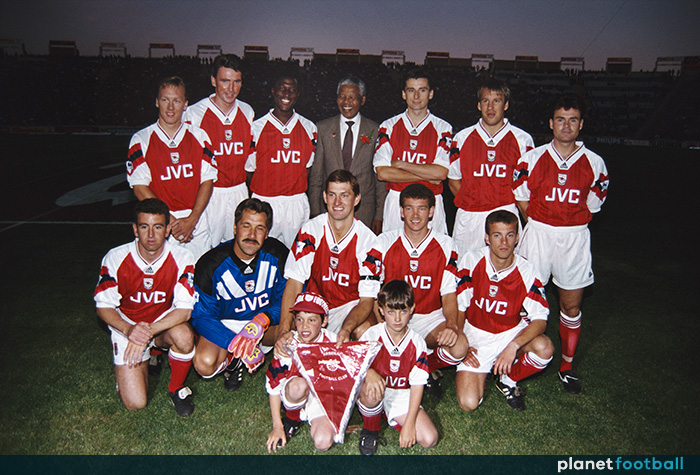 “I knew the culture when I came to England, that socialising was really important,” Jensen says. “What you have to remember is that the British players had grown up with this since they were young.

“They had seen their dads and grandads doing the same thing, so it was a part of the culture.

“I liked it. I come from a similar culture, where we trained hard, played well and won many trophies with Brondby.

“We had the same social life. After the game we liked a beer and we’d chat about the game. We did the same in England.

“When foreign players came into the English game in a rush, they brought some of their culture with them. That meant English football’s culture had to change to match them.

“That’s what Arsene Wenger did and did brilliantly. It was about the English and foreign players both adapting to each other and each other’s customs. That’s how he got success.”

Having retired as a player in 2001, Jensen embarked on a coaching career that would see him be an assistant manager at Brondby and Getafe in Spain, before he became manager of Randers in the Danish Superliga in 2009.

In 2011, he returned to England in a surprising – to fans of the Premier League at least – appointment as assistant manager to Steve Kean at Blackburn Rovers.

“Jerome Anderson [a football agent] was involved with Blackburn at the time,” Jensen explains. “He was also involved with players at Arsenal during my time there, and we kept in touch from time to time over the years.

“He knew my coaching career, particularly as assistant to Michael Laudrup in Spain. When he saw that Steve Kean needed experience as an assistant, he thought of me.” 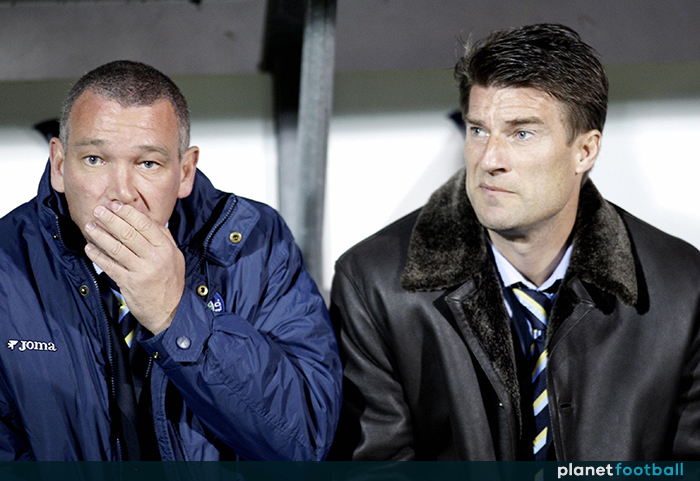 With the Venky’s as owners, Blackburn soon became a crisis club and were eventually relegated to the Championship. Jensen has little time in explaining exactly how they came by that reputation.

“I came in with my experience and knowledge, and it was hard because we were in the bottom eight. Then Venky’s changed a lot. They wanted to control a club with no knowledge of how football works, and that’s a hard task.

“The stories off the pitch affected the players, who were worried about their futures. It was a surprise quite how Venky’s tried to make it work.”

If Jensen’s second spell in England was far more short-lived and far less successful than his first, he made enough friends in north London to make amends.

Every time a midfielder at the Emirates Stadium picks up the ball and is urged to shoot by home supporters, there will hundreds, thousands even, who are instantly reminded of John ‘Faxe’ Jensen.

In an era when foreign players were viewed suspiciously as mercenaries or Fancy Dans, Jensen could not have been a more appropriate antidote.

This interview was originally published in April 2017.

Where are they now? Denmark’s XI which sensationally won Euro ’92