Giant killings: How Bradford crushed Mourinho’s Chelsea at the Bridge 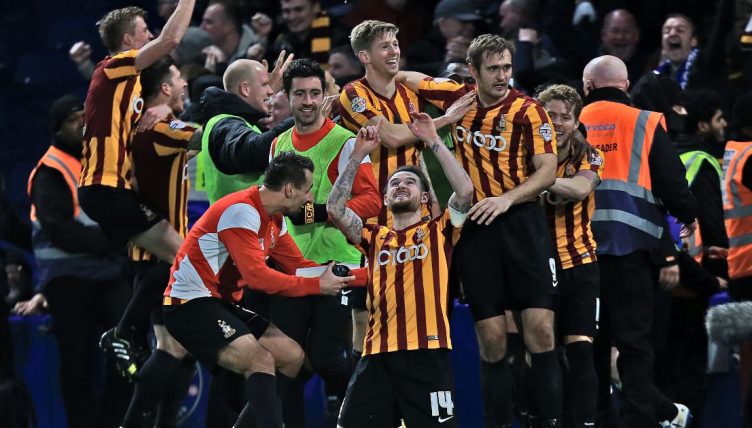 It seemed almost inconceivable that Bradford City could beat Chelsea at Stamford Bridge. The gulf in quality between the two sides was vast, much greater than the 49 league places that separated them at kick-off. Jose Mourinho meant business, too.

Back for his second spell in charge, Mourinho was hunting down more trophies, determined to prove that he’d lost none of his spark. A steely and streetwise winner at his best, Mourinho moulded the Chelsea team in his own image once more.

In the 2014-15 season, his efforts paid off as they lifted the League Cup and reclaimed the Premier League title. Across 54 games in all competitions, the relentless Blues won 36 and lost just four.

Amazingly, the only team to beat them at home was third-tier Bradford. A week on from losing away to Yeovil Town, they showed incredible resolve, coming from behind to cause one of the greatest shocks in FA Cup history.

“It was such a brilliant team performance that day. Everyone, to a man, probably ran 11 to 12km, which we had to because obviously they moved the ball around so fast. Everyone put a shift in,” says James Hanson, the former Bradford striker and cult hero.

“They were so strong at home, and they hardly conceded a goal. They had unbelievable talent. I remember Mo Salah was playing on the right wing. He wasn’t at his best at Chelsea but that just shows the depth of quality they had. It’s a massive achievement and it’ll be hard to get better than that.”

In the pre-match press conference, Mourinho said it would be a disgrace if Chelsea lost to Bradford. The decision to go with a strong team, featuring several regulars, reflected his desire to progress to the fifth round with minimal fuss.

Only Gary Cahill retained his place from the 1-1 draw with Liverpool four days earlier, but the Blues still named nine full internationals. The only exceptions, Andreas Christensen and Kurt Zouma, were capped later that year.

Even those brought in from the fringes had plenty to offer. Salah and Loic Remy were given rare starts, supporting Didier Drogba in attack, with Cesc Fabregas, Eden Hazard and Willian kept on the bench in case of emergencies.

“A lot of clubs tend to give young lads a chance in the FA Cup, but they had quite a strong team out,” says Hanson.

“To bring on their big guns as well showed massive respect to us. Jose Mourinho must have known at the time that his team was struggling. They couldn’t compete so he wanted to try and change something.”

Although football is about much more than just money, it still holds huge sway. The financial disparity was clear as the two teams took to the pitch and painted a bleakly accurate picture of the challenge Bradford faced.

Chelsea’s starting line-up cost more than £100million to assemble, with a similar amount sat in the dugout. In contrast, Bradford’s team was composed almost entirely of free transfers. Hanson was the most expensive signing, having joined from Guiseley for £7,500.

Despite the array of talent and Chelsea’s formidable home record, the Bantams were unfazed.

They had a core of players who had been with the club for a few years and knew that they could rise to the occasion against top-level opposition, having seen off Arsenal and Aston Villa on the way to the League Cup final in 2013.

“We’d played in big games, and we almost thrived off it. We looked forward to it because we knew the pressure was off us. It was all on Chelsea. We just wanted to go and enjoy it, whatever the result was going to be,” Hanson says.

“We had a settled team when Phil Parkinson took charge. There were five or six, the core of the team, that would play every week during his reign. They wouldn’t let the team down and I think that was a massive part of the cup runs as well.

“We knew our jobs and we had an effective way of playing. We played quite direct, but it worked for us, and it obviously caused teams a lot of problems.”

Mourinho was known for his meticulous planning, but Parkinson managed to catch him off guard. The Bradford manager had heard that Christensen would be fielded at right-back so sent the strapping Hanson up against him to exploit the teenager’s lack of experience and physicality.

“Phil Parkinson made the decision to play five in midfield and put me on the left. He wanted to target Christensen on set plays and kick everything on that side, so I did a job for the team and helped the left-back out. We just played one up front, but it obviously worked.”

Petr Cech denied Andrew Davies early on as Bradford made a decent start, only for Chelsea to take the lead after 21 minutes, Cahill cleverly flicking in Oscar’s corner at the near post.

Ben Williams was forced to make a couple of good saves from a bullish Drogba before Ramires doubled their lead, winning the ball off Filipe Morais with a strong challenge and driving forward purposefully. He played a smart one-two with Salah and slotted in off the post.

Fearing a rout, many underdogs would have crumbled, but Bradford stood firm. “When Chelsea scored the second goal, we were looking around at each other and thinking, ‘We’re not actually playing that bad here’,” Hanson continues.

“We had a foothold in the game. It wasn’t like Chelsea were coming forward all the time and creating chances.”

They just needed a lifeline. It came shortly before the break. Morais’ free-kick was only partially cleared, and the attack continued. Jon Stead worked a bit of space on the edge of the box to shoot and Cech could only divert his powerful drive into the roof of the net. 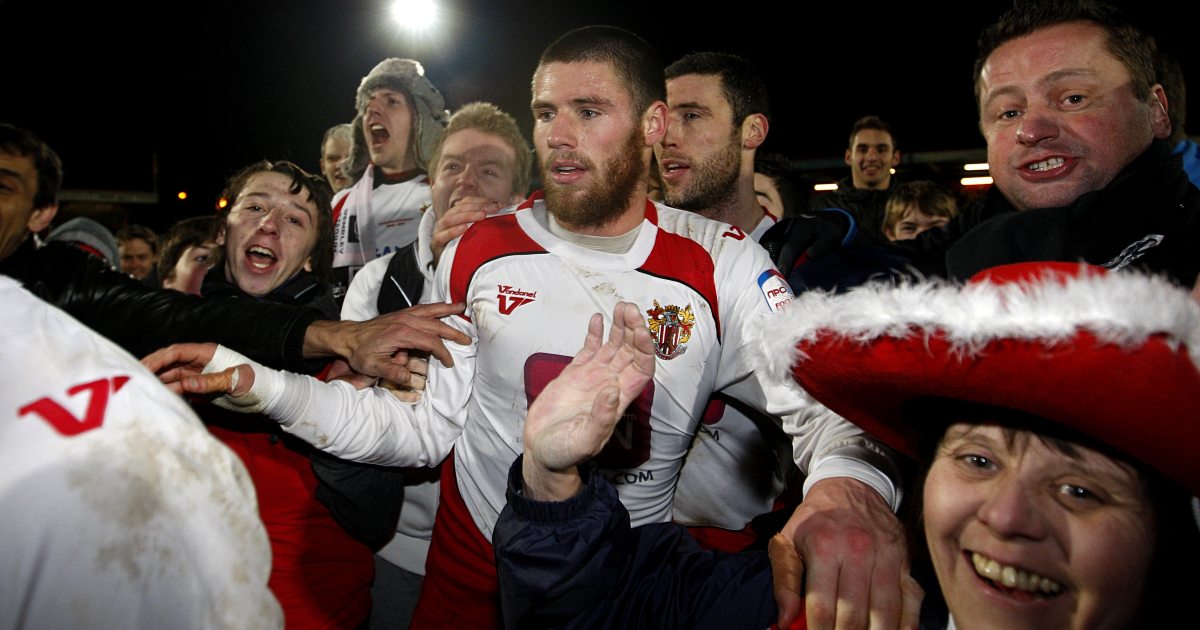 “The goal just before half-time was massive for us. It gave us a little bit of belief going into the second half. That was the key moment in the game,” recalls Hanson.

“You could hear the seven or eight thousand Bradford fans spurring us on and we were shooting towards them in the second half. We celebrated every goal that went in with our fans, which made it extra special.”

From then on, the Bantams took control, believing in the impossible. Mourinho’s decision to send for the cavalry didn’t make any difference. Five minutes after Fabregas and Willian were summoned from the bench, Morais levelled the scores.

James Meredith’s long throw was flicked on by Hanson at the near post. Billy Knott’s snapshot was saved by Cech, and the rebound fell to Morais, who made no mistake.

Eleven years on from appearing in Mourinho’s first game as Chelsea manager, the Portuguese midfielder had struck an emotional equaliser at the home of his former club.

The away end was rocking and even the introduction of Hazard couldn’t shift the momentum back in the Blues’ favour. Chelsea were forced onto the back foot as the Bradford players grew in confidence, maintaining possession and making their illustrious opponents chase.

Buoyed by his goal, Morais ran at Cesar Azpilicueta and whipped in a cross. Stead showed composure to tee up Andy Halliday and he swept a superb first-time finish into the top corner from outside the area, prompting scenes of pure carnage.

Drogba and Zouma both missed good chances to equalise before substitute Mark Yeates made it 4-2 in added time. Stead was involved again, his second assist capping an excellent centre-forward’s display.

A day to remember for @officialbantams 🙌

“He was sensational, honestly. I don’t think he miscontrolled the ball once. Everything just seemed to stick to him. He held the ball up superbly for us and gave us a massive platform. He used his body really well and showed that Premier League experience up against Gary Cahill and Kurt Zouma,” explains Hanson.

Three goals in the final 20 minutes had crushed Chelsea’s chances of a domestic treble and delivered the most spectacular upset. It was only the second time they’d failed to reach at least the fifth round since 1998 and they’d won the FA Cup in four of the previous eight seasons.

Thousands of Bradford supporters had travelled down to savour a big day out in London. Dreaming of a miracle, they knew that harsh reality would almost certainly intervene. Through a combination of hard work, self-belief and some inspired performances, for once it didn’t.

“We were always really fit. That was one of the key attributes Phil Parkinson wanted from his team. We were fit and strong and organised. We thought we’d maybe get chances in the second half. We obviously didn’t expect the game to pan out the way it did, but we showed great character.”

After sharing their joy with the travelling fans, long after the final whistle had sounded, the celebrations continued in the dressing room, until they were briefly interrupted by an unexpected visitor.

Hanson says: “The music was straight on, we were shouting and screaming all over, then it just went silent for a second. We all realised that Jose Mourinho had come in. He said something along the lines of ‘You lads have very big balls.’ He walked around and shook all our hands. He showed class there.

“After we got showered, the Chelsea lads were waiting outside with their shirts and I ended up getting Drogba’s.”

Chelsea went on to win the title and were otherwise unbeaten at Stamford Bridge all season. So Bradford did what nobody else could, unexpectedly flooring Mourinho’s side.

Even though the Bantams were eventually knocked out by Reading in the quarter-finals, Hanson and his teammates had bolstered their legend with another scarcely believable result. It was a momentous win and a powerful reminder of the FA Cup’s undying appeal.

“I had lots of friends and family going down that day. It might even top the League Cup run. It was surreal to share that moment at the end of the game with all the fans,” he says.

“Every lower league footballer dreams of that big cup tie. Even just to play against Chelsea was brilliant, let alone to beat them. With the League Cup before that as well, I count myself very fortunate for what I’ve done in my career, the players I’ve played with and the memories I’ve shared with them.”