The story of Brian Clough’s first NYE as a manager: The beach, booze & a beating 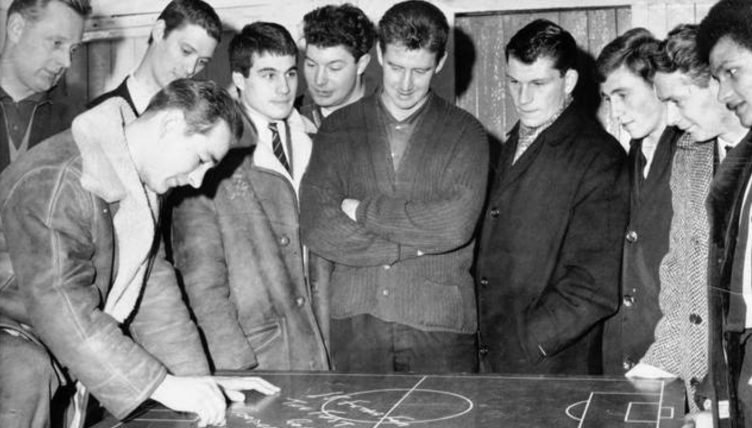 After losing that job when the First Division club appointed a new manager in May 1965, he began his first managerial post on 29 October at Hartlepools United, lying next-to-bottom of the Fourth Division. Following two initial league wins, the first before Peter Taylor joined Clough at the club, Hartlepools United lost their next three and sank back to second bottom of the Fourth Division.

This extract from Christopher Hull’s excellent new book on Clough’s first managerial job tells the story of Clough’s first Christmas and New Year as a manager.

“It was chances, chances all the way” at home to Colchester on 18 December, according to that evening’s Football Mail. Hartlepools’ best came on 10 minutes when Ernie Phythian crossed from the by-line and from 6 yards out and with the goal gaping, Willie McPheat ‘stumbled and fell’.

Colchester’s disciplined defence of seven or eight men kept them at bay until they collected a half-clearance to break away and hammer home the game’s only goal on 78 minutes.

Firmly settled in the bottom four and facing little Christmas and New Year joy, they were in trouble. The early air that Clough and Taylor had puffed into their balloon had just as quickly hissed out.

Clough was disappointed but realistic. They’d “dominated the game from start to finish,” but the opposition had stolen a goal and both points. People might rightly ask what he intended to do about it. After all, he’d been a forty-odd goal a season striker in his prime.

The truth was that “a manager cannot actually teach a player to put the ball in the net”, he wrote. You can impart many things, but not that. “If Jimmy Greaves is going to miss from two yards there is nothing anyone can do about it except Jimmy Greaves.” And Clough would know, both as a striker himself, and an ex-England colleague of the Spurs forward.

The place to teach the players was the training ground. Only problem was, the club didn’t have one. Most of the time they trained on sand rather than grass.

They used their own Victoria Ground if the pitch wasn’t soft, but their main training venue was Seaton Carew beach. The tide left a perfectly flat and even surface for running and five a side, although a major downside was its exposed location and the constant wind.

For Ken Simpkins, the Football League’s heaviest goalkeeper, Seaton was the world’s worst place to get a sweat on as he struggled to keep his weight down.

Teesside-born Clough deemed it “one of the coldest spots in Britain.” You had to keep moving just to keep your circulation going. Even the seagulls flew backwards to stop their eyes watering.

All this might partly explain, despite Clough’s ropey knee, his involvement in games of five a side. Barry Ashworth remembers an occasion when the boss went through the back of him. They squared up and a scuffle ensued, but it was handbags at two paces and was sorted straight away.

When they weren’t training on the beach, Taylor often ordered the team captain to lead the players on runs from the ground and around the adjacent docks. They’d stop for regular fag breaks and to chat with the dockers. These same men might be stood on the terraces come Saturday.

We've got two copies of 'Alchemy: Brian Clough & Peter Taylor at Hartlepools United' by Christopher Hull up for grabs!

All you need to do to be in with a chance of winning one is RT and like this tweet, and follow @planetfutebol and @TheHistoryPress. Easy. pic.twitter.com/fy0WLavvmt

While Taylor never exercised himself, Clough loved to lead by example and don some training kit. Several players described him as a superb striker of the ball who’d show them how it was done. You could tell, says defender Bob McLeod, that “he still desperately wanted to play.”

In matches, Clough would keep half-time instructions to their most basic. Left-back Brian Drysdale remembers one of the boss’s conversations with Ernie Phythian:

“Ernie, young man. What are you doing over the halfway line?”

“I’m chasing the centre-half back.”

“Ernie. What am I paying you for?”

“Well, if I see you over the halfway line on the offence side, I’m gonna fine you.”

He told forward Jimmy Mulvaney before one game, “You must be the worst player in the league. But you score goals. Never forget, that makes you priceless, like me.” It worked, because Jimmy professed that he “would have run through fire” for Clough.

Wing half Barry Ashworth says a pet hate of Clough’s was crosses entering their box. He’d tell the full-backs, “I don’t care what you do, where it hits you. It doesn’t come into the danger area.”

Next up was a Christmas home and away double-header against local rivals Darlington, sitting seventh (with games in hand) in the Fourth Division. Could ’Pools pick up any points?

Darlington players appeared mesmerised from the kick-off on “a rutted ice-rink” of a pitch as the ball moved from Ambrose Fogarty via Tony Parry to Peter Thompson.

After a two-month absence from the team, Thompson rammed his shot between the outcoming goalkeeper’s legs to put ‘Pools ahead after just 20 seconds. In a derby clash full “of incident and excitement” before the biggest Victoria Ground crowd of the season – 9,290 – a 1–1 draw was a fair result.

Part two of the North-East derby took place the following evening, as ’Pools became the first team to earn a point at Feethams since August. A performance of “sheer guts, fighting spirit, and a liberal dash of luck” led to “one of their cheekiest and most celebrated” raids yet on their rivals. Clough’s side had bagged another draw against one of the most fancied teams in the division.

Tranmere Rovers away was another tough ask, lying third in the division with a home record of nine victories and two defeats.

In his most recent programme notes, Clough had told fans about the seasonal sacrifices his men would be making for the greater good: “Twelve footballers who will not be celebrating the New Year are those who play for Hartlepools United. On New Year’s Day, we meet Tranmere Rovers in Birkenhead, and will be travelling by coach the day before, so all the players will be nicely tucked up in bed on New Year’s Eve.”

The Mail told the same story, describing how the players would be “sleeping soundly in their Chester hotel” in preparation for their battle the next day.

Drysdale relates something quite different about the sequence of events on New Year’s Eve. They were indeed chatting over cups of tea in the hotel the night before the game, when one player declared:

“He got us half-pissed,” Drysdale admitted. At one point during their drinking session, a dog appeared in the lounge. Clough barked at its owner, “Get this dog out the room.”’ The dog and its owner obeyed.

If Clough’s intention had been to relax the players, he succeeded. Hartelpools’ goalkeeper Les Green dropped a cross to concede just 24 seconds into the match and was picking the ball out of his net for a second time after Tranmere’s third attack on five minutes.

While ’Pools did have plenty of possession and hit the woodwork twice in the first half, their defence went “very ragged” and “fell to pieces” after the break.

Following the 6–1 New Year drubbing, the Mail declared it was “back to square one” for Brian Clough. Even the manager admitted that his “New Year’s Eve celebration ‘ban’ on the players didn’t seem to have the required effect.”

It wasn’t the ideal start to 1966, the year that England hosted the World Cup.

‘ALCHEMY: Brian Clough & Peter Taylor at Hartlepools United’ by Christopher Hull is published by The History Press on 15 September 2022. To purchase a copy CLICK HERE.

READ NEXT: An ode to Peter Taylor, a man who history has done a great disservice