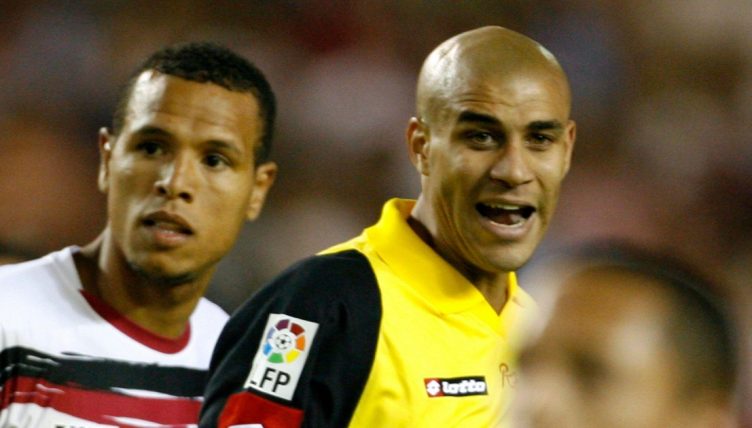 It seemed an innocuous enough altercation. As Sevilla searched for a late equaliser, trailing 2-1 to Zaragoza in a La Liga match in early January 2007, Brazilian forward Luis Fabiano stretched in an attempt to keep the ball in play.

Defender Carlos Diogo came across to block his path, but Fabiano’s efforts were futile anyway. The ball rolled harmlessly out for a goal kick.

For Zaragoza, the game looked to be won. It was petering out, set for an uneventful conclusion to a hard-fought contest. Then all hell broke loose.

This was a vintage season for both Sevilla and Zaragoza. Come the end of it, Zaragoza finished sixth in La Liga, qualifying for the UEFA Cup thanks in large part to Diego Milito’s 23 league goals.

Sevilla, meanwhile, went on to defend the UEFA Cup title they had claimed the season prior and win the Copa del Rey with a team that included Dani Alves, Jesus Navas, Renato and Freddie Kanoute as well as Luis Fabiano.

Going into this game, though, Sevilla were dreaming not just of the UEFA Cup and Copa del Rey success, but of La Liga glory. They were top of the table and determined to hold onto their lead.

Zaragoza went ahead early though – through a Carlos Diogo strike. That man Milito extended their lead 10 minutes after half-time, but Sevilla came back, Luis Fabiano pulled one back in the 70th minute to set up a tense final 20.

Zaragoza hung on and, as Sevilla became more and more desperate, Luis Fabiano made his lunge for the ball as Carlos Diogo used his body to shield it out.

It was Fabiano, occasionally confrontational, who initiated the scrap, apparently angered by something Diogo, a Uruguay international, had done or said.

There was some speculation of bad blood between the South Americans, who had faced off against each other while at Sao Paulo and River Plate, though both denied any lingering animosity.

The two players squared up, locking foreheads as the bubbling undercurrent of tension threatened to boil over.

Fabiano flirted with a headbutt, nudging his head towards Diogo’s.

Then came the explosion. After Fabiano grabbed Diogo around the neck, the latter snapped, almost knocking his opposite number to the ground with a right-handed punch to the jaw. This was perhaps the only semi-competent moment, a strike that Tyson Fury might even have considered passable.

From then on, things became hilariously amateurish.

The Sevilla man stumbled, struggling to regain his balance, taken aback by the speed of Diogo’s reaction.

Things had escalated further even perhaps than Fabiano expected. With a comical look of surprise on his face, he prepared to fight back.

Fabiano’s response was to begin swinging wildly at Diogo, first with a right, then a left, then another right, and another left. None of them connected, so don’t expect Anthony Joshua to incorporate the windmill technique into his next fight.

Diogo, instead of simply evading Fabiano’s flailing arms, decided he could block them, and the result was two footballers erratically throwing their arms around as if in the middle of a moshpit.

Despite the genuine entertainment factor, neither player would have been encouraged to pursue a career in boxing.

In total, from the moment of the first punch, Fabiano and Diogo had 16 seconds of scrapping. They’d probably struggle to justify pay-per-view, but it was good value nonetheless.

Things had, within a few seconds, descended into chaos. Fabiano’s teammate and compatriot, Adriano, was first to interupt, grabbing Diogo around the neck before he was swamped by a sea of orange and white shirts.

Players from both teams were quickly across to break things up, while Fabiano and Diogo, were taken aside by teammates in an effort to calm them down.

Fabiano was soon consoled by manager Juande Ramos, desperate to talk some sense into a player who seemed to have gone completely off the rails.

The referee, who likely needed very little time to consider hid decision, brandished red cards for both, and they were kept at a safe distance as they headed down the tunnel for the remaining few minutes of the game.

Fabiano and Diogo were both given five-match bans for the fight.

“I want to ask for forgiveness from everyone who saw it,” Fabiano said when the dust had settled. “It was an ugly incident but he stamped on me, then insulted me and attacked me and I had to defend myself.

“When I returned home my daughter said, ‘Daddy, I have seen you fighting on the television and you shouldn’t fight.’ This is what hurts most.”

Diogo, meanwhile, blamed it all on the heat of the moment.

“Your heart rate is high,” he said. “It’s not the most appropriate but it happens and then when you’re cold you think differently. Let people watch the video to see how things went and who attacked first.”

Though the incident initially appeared to be instigated by Fabiano, he later claimed Diogo had said things that “couldn’t be repeated”.

The referee, Alberto Undiano Mallenco, wrote in his match report: “I noticed that player No.2 of the Real Zaragoza SAD team, Mr. Carlos Andres Diogo Ensenat, and player No.10 of the Sevilla FC SAD team, Luis Fabiano Clemente, were hitting each other with punches.

“Without being able to specify which of the two initiated the action, I showed both players the red card.”

The bans were served and both players moved on, though Fabiano continue to play on the edge, with a trademark tenacity to his game. Diogo, too, was always a defender who took no prisoners.

Fabiano remained at Sevilla until 2011, scoring 106 goals in 229 appearances for the Andalusian club. His prowess in front of goal more than compensated for his disciplinary issues.

He returned to Brazil after his successful spell in Spain, scoring regularly for Sao Paulo before retiring after a season at Vasco da Gama in 2017.

Diogo, meanwhile, made what was originally a loan move from Real Madrid to Zaragoza permanent, staying at the club until 2011. He later played for Huesca and Belgian outfit Gent, before returning to Zaragoza in 2014 and shortly after announcing his retirement.

Both players represented their countries and played at the highest level, so a brief skirmish likely wasn’t a highlight of their respective careers.

For everyone else, though, it remains an extremely entertaining watch.

How Diego Maradona inspired Davor Suker to greatness at Sevilla