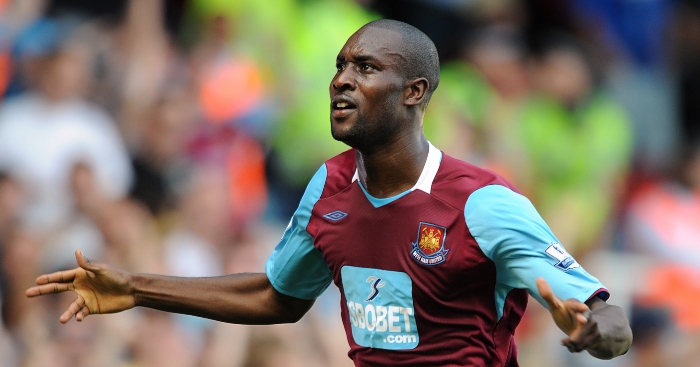 Over the course of two minutes in February 2011, Carlton Cole showed West Ham fans – and everyone else – what he was about.

First, the England international striker doubled the Hammers’ lead in an FA Cup meeting with Burnley – collecting the ball when offside and then handling and falling to the ground before squeezing the ball past Lee Grant.

Then, seconds later, he curled perfectly into the top corner to make it 3-0.

Those were not two goals which you’d expect to see from the same player in the same match… unless the player in question was Carlton Cole.

To understand Carlton Cole is to accept you will never be able to truly understand him.

During that 2010-11 season, he scored just once in his first 18 games before striking twice in a 4-0 victory over Manchester United.

He was released in the summer of 2013 after scoring just twice in the previous season, but it took him only 10 games (six of those as a substitute) to surpass that target after he re-signed on a free.

The Burnley double was just the tip of the iceberg.

A few goals West Ham have scored at home against Burnley: (a thread)

Cole never scored more than 10 Premier League goals in a season and only topped six twice at that level, yet at his best he could seem unplayable… for a handful of nonconsecutive games.

While some top strikers seem to be at their best when given time to use the intellectual side of their game, Cole was always at his best when he specifically didn’t have to think too much about his decisions.

It’s not that he didn’t have the smarts and the instincts to deliver, but you always got the sense that what others saw as the luxury of time, he interpreted as an extra chance to sabotage himself.

It’s no coincidence that Cole’s first West Ham goal came less than 10 seconds into his debut against Charlton Athletic: any longer and he might have realised where he was and tried to do too much.

#OnThisDay in 2006: Carlton Cole made his West Ham debut, scoring in a 3-1 win over Charlton at Upton Park pic.twitter.com/echwEd3dj5

This didn’t just apply to individual chances, either. Perhaps the best goal he ever scored in a West Ham shirt also could have easily ended up being the most valuable too.

West Ham had lost five of their previous six league meetings with Tottenham when the rivals met at the start of the 2009-10 season.

After arriving late to meet the second ball when he probably ought to have been in position for the first one, Cole found his inner Didier Drogba, taking one touch and lashing a left-footed shot past Carlo Cudicini from 30 yards out on the turn.

On this day in 2009, Carlton Cole with a belter against Tottenham. pic.twitter.com/r1Rf0Oc7kG

It was the sort of goal he hadn’t scored before or since, and it gave the home side a chance to beat Spurs for the first time since the ‘Lasagnegate’ game of 2006.

West Ham led with 40 minutes remaining, and the next five minutes would be crucial. Unfortunately, Cole got this information into his head.

The result? An overambitious backpass straight into the path of Jermain Defoe for a quickfire equaliser. Few remembered Cole playing a backpass of any variety, let alone one like this, but what’s done was done.

Even the best period of his career, the two 10-goal seasons under Gianfranco Zola, was highlighted by a goal which summed up every facet of his game.

At first glance, a wonderful curling finish to round off a stunning team move; on closer inspection, a man looking along the line throughout but not deigning to move the right side of it, and therefore standing in an offside position when the ball comes to him.

For those two years, we were dealing with a man blessed with entirely unwarranted confidence, as if he was a living embodiment of that famous “tell him he’s Pele’ line, acting as though he could do no wrong even when evidence pointed to the contrary.

Indeed, the game in which he scored that stunner against Wigan, he ended the game watching on from the sidelines after picking up two yellow cards. That wasn’t important, though. He’d done the important bit already.

It was easy to mock Cole, and the ‘Can’t Control’ nickname stuck with him throughout his West Ham career, but let’s face it, most fans would rather have a striker who alternates between 90% and 10% of his ability than one at 50% the entire time.

You don’t enjoy opening a Christmas present as much when you know it’s going to be a yellow sweater, but the high-stakes scenario of being told it’s either a pony or a pair of socks on the way will at least make things more exciting.

Carlton Cole was football’s version of deciding between the gameshow prize and the contents of the mystery box, and if you didn’t want that… well, you shouldn’t be supporting a team like West Ham.