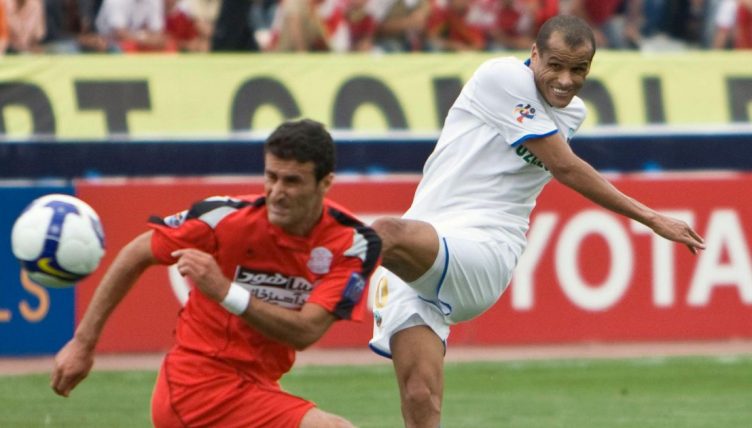 In August 2008, Brazilian World Cup winner Rivaldo made the curious decision to join Uzbek side Bunyodkor. It was a wild ride.

At his dominant peak, Rivaldo was a phenomenon.

During the late 1990s and early 2000s, the mercurial attacker hit the highest heights with Brazil and Barcelona, forming one of the greatest attacking trios in international football and single-handedly dragging Barcelona to league glory.

He may have been less glamorous than Ronaldo and Ronaldinho, but Rivaldo was, on his day, as impressive as anyone in the game.

By his early 30s, however, he seemed all but finished at the top level.

A disappointing spell at AC Milan petered out in embarrassing fashion, and in late 2003 Rivaldo went back to Brazil at the age of 31.

Just a year and a half after winning the World Cup, his days appeared numbered. 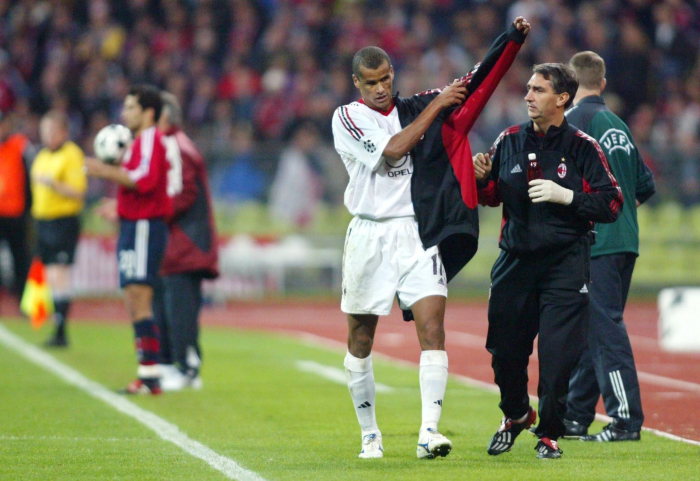 But appearances can be deceptive.

Somehow, that 31-year-old Rivaldo would proceed to squeeze another 12 years of football out of his ageing legs, traveling around the world on a kind of eternal victory lap, postponing retirement, retiring, coming out of retirement, eventually retiring again.

The epilogue to Rivaldo’s career, which finally ended in 2015, basically mirrored that of The Lord of the Rings: Return of the King.

At the end of the film, Frodo and Sam — having seen the ‘One Ring’ destroyed in Mount Doom — are rescued from certain death by giant eagles, which suggests that things are winding down (2004 spell at Cruzeiro; flirting with Sam Allardyce’s Bolton).

But then there’s a not-entirely-necessary reunion scene in which all the characters embrace the bed-ridden Frodo (a four-year spell in Greece with Olympiakos and then AEK Athens). 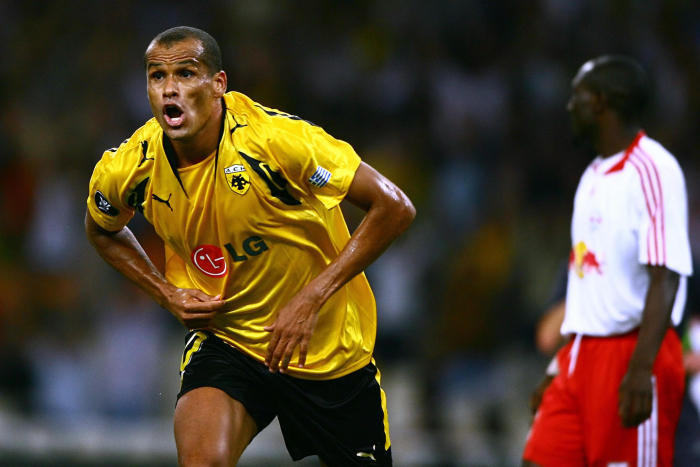 At that point, the film actually appears to be over.

Except it isn’t: Aragorn is crowned king (fat contract in Uzbekistan), the Hobbits have a beer in the Shire (knocking in some goals for São Paulo), Frodo leaves — to die, maybe? — on a boat (spell in Angola) and only then, finally, does Sam – Gamgee, not Allardyce – just sort of settle down with his wife and kids (out of retirement to play, alongside son Rivaldinho, for Mogi Mirim).

Taken as a whole, Rivaldo’s final decade in football is obviously quite weird. But it was his two-year spell with Uzbek side Bunyodkor, between 2008 and 2010, that really caught the eye.

Let’s not beat around the bush: Rivaldo joined Bunyodkor for the money. He had just enjoyed a great season with AEK Athens, where he played alongside four other Brazilians, two Portuguese and fellow entrepreneur Mohamed Kallon.

Life in Greece, one presumes, must have been pretty good.

But in late August 2008, the attacker told AEK — with “a million apologies” for leaving it so late in the transfer window — that he would be heading to Uzbekistan.

“It was a difficult decision to make but I have received an offer that is very good for my career,” Rivaldo explained, Uzbekistani soʻm signs in his eyes.

“It’s just that things happened fast and I had to go. Anyone else in my position would not have said no to such a deal.”

He was probably right. The deal was £8million over two years, a fairly ridiculous sum for a 36-year-old barely able to run.

There was just one hitch.

Despite the Brazilian’s words, AEK hadn’t actually agreed to sell Rivaldo, and the club quickly pointed out that he was “under contract… until the end of this season” and would “only go if the club gets a replacement.”

When Bunyodkor stumped up just shy of £1million, however, the deal was done.

Rivaldo took to Uzbek football like a duck to water. Murky, oily water.

Not that doing so was very difficult: although only formed in 2005, Bunyodkor had risen to the top thanks to significant (and anonymous) financial backing. By 2008, they were making audacious bids for the likes of Samuel Eto’o.

As such, Rivaldo joined an already strong squad that was, at the time, unbeaten in the Uzbek League after 18 games.

His arrival only improved matters: two goals on his debut were followed by seven more, and Bunyodkor won the title with two games to spare.

After only a few months at the club, Rivaldo extended his contract, stating his desire “to contribute to the development of football in Uzbekistan”.

“I am satisfied with the conditions,” he added, “and I have decided to stay in this wonderful country for several years.”

His next campaign was even better.

In the 2009 season, Rivaldo finished as the league’s top scorer with 20 goals in 29 starts, helping Bunyodkor to another title victory.

There were several highlights during that campaign. Between May 14 and June 29, the forward went on something of a hot streak, scoring, in sequence, one goal in a match, then two, then three, then four. (A crowd of 5,416 witnessed Rivaldo putting four past a hapless Sogdiana Jizzakh.)

Bunyodkor were, however, eliminated at the quarter-final stage of the Asian Champions League — a competition in which they were expected to progress further.

Despite the on-pitch success, and despite Bunyodkor’s willingness to hire not one but two Brazilian managers (first Zico, then Luiz Felipe Scolari), the 2009 season would prove to be Rivaldo’s only full campaign in Uzbekistan.

Midway through the 2010 season, with a healthy six goals in 11 appearances to his name, he announced his departure.

With an exclamation mark for good measure, Rivaldo tweeted that his contract had been cancelled. No further information was given, and he flew to Brazil the next day.

The truth came out not long after. Rivaldo, it emerged, was suing Bunyodkor for not paying his wages.

“By the time he left, he had only been paid for one season,” said Luis Pereira, Rivaldo’s lawyer. “The contract has not been honoured.”

In what must surely go down as the most interesting part of Rivaldo’s spell in Uzbekistan, Pereira said his client had specifically asked for the help of Gulnara Karimova — the billionaire socialite daughter of Uzbek dictator Islam Karimov — in order to settle the case.

Karimova, who also enjoyed a career as a pop star under the name ‘GooGoosha’, was believed to be the de facto controller of Bunyodkor.

She is currently in prison on charges of corruption.

It’s hard to have a lot of sympathy with Rivaldo after his shortchanging at Bunyodkor.

While athletes can’t be role models in every aspect of their lives, there’s an argument to be made that Rivaldo should never have played in Uzbekistan or, indeed, called it a “wonderful country” after Bunyodkor gave him a juicy new contract.

During Karimov’s reign as head of state, international NGO Human Rights Watch noted that “Uzbekistan’s record of cooperation with UN human rights mechanisms is arguably among the worst in the world.”

Arbitrary arrests and torture were, and still are, some of its worst offences.

Not only did Rivaldo help to sanitise the global perception of Uzbekistan, he actually had ties — in the form of Karimova/GooGoosha — with those in power.

In fact, Craig Murray, a former British ambassador in Uzbekistan, told The Guardian in 2009 that Bunyodkor was effectively “part of a campaign by the president to win popularity for his daughter.”

The club’s mysterious rise to the top of the sport? Perhaps not so mysterious.

Rivaldo would carry on playing for another five years or so after leaving Uzbekistan, becoming president of Brazilian club Mogi Mirim in 2008 and later playing alongside his son, Rivaldinho. In July 2015, the father and son duo scored in the same match.

But although things turned out fine for Rivaldo, his experience in Uzbekistan should serve as a cautionary tale for players taking a big paycheque from an opaque source. Karma, whatever your salary, can catch up with you.