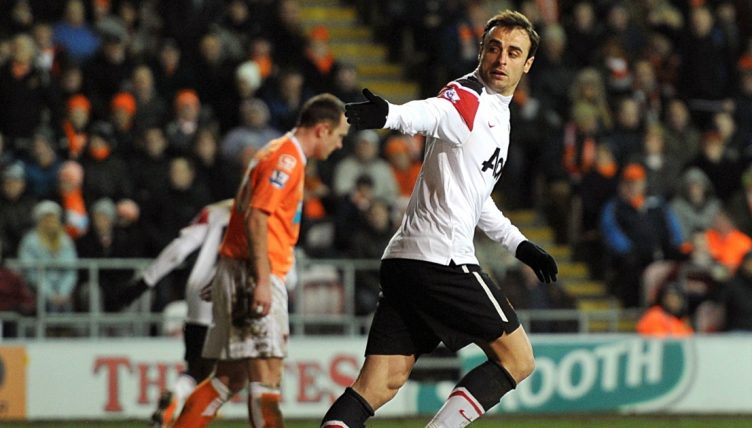 You cannot think about Dimitar Berbatov’s time at Manchester United without mentioning that piece of skill.

Berbatov gave a recollection of the time he pirouetted past West Ham defender James Collins in an interview with FourFourTwo magazine in 2018.

“The spin was something I was trying to do, because when you’re on the byline, the defender thinks you have nowhere to go,” Berbatov said. “His guard’s down, and that’s the time to improvise. I spotted James Collins and he was thinking, ‘You’ve got nowhere to go, Berbs’.

“After Ronaldo had scored, I tried to look so cool – no emotion, just walking back to the halfway line like nothing had happened, like, ‘Yeah, this is a usual day for me’. But inside I was like, ‘F**king hell, did you all see that?!”

When asked if the best piece of skill he’d executed on a football pitch, Berbatov replied: “Probably not.”

Probably not. It’s hard to know whether he was being modest, humble or exhibiting the kind of arrogance that any charismatic character requires.

Berbatov: “My favourite moment with Ronaldo was when I set him up for the easiest goal of his life, against West Ham. I was going to finish it myself, but I was feeling generous that day.” #mufc [Betfair]

Besides, Berbatov could well have been thinking back to a January night in Blackpool a decade ago and a touch that was smoother than Usher buttering a slice of toast.

United were unbeaten and top of the league going into the January 2011 fixture, but quickly found themselves 2-0 down at Bloomfield Road.

Ian Holloway, a man so Bristolian that he makes Tricky sound like the Queen, had assembled a rag-tag bunch of entertainers who were busy putting two fingers up at pundits who’d predicted instant relegation for the Seasiders.

But this was Manchester United under Sir Alex Ferguson – a team so resilient you suspected they could cheat death itself. Once Berbatov pulled a goal back in the second half, there was a degree of inevitability they’d go on to win 3-2.

And so it transpired. Javier Hernandez plundered an equaliser before Berbatov ran onto an exquisite Paul Scholes pass to ram home the winner and break Blackpool hearts.

Berbatov’s brace grabbed the headlines as the assembled journalists produced the written equivalent of an eye roll and a knowing wink. This is what United were famous for after all.

But the comeback was signposted as early as the first half when the languid Berbatov produced a moment of such class that Blackpool should have instantly packed up and gone home.

It helped that Paul Scholes was around to create the opportunity. Firmly into the autumn of his career, the United legend lacked the mobility of his earlier years but retained the unerring knack of picking out a team-mate.

That would explain why the Blackpool midfield, realising the futility of closing him down, allowed Scholes the freedom of Pleasure Beach to pick out Berbatov with a driven pass.

It was at this moment that the former Tottenham striker metamorphosed into a champion ballerina.

Demonstrating the kind of athleticism that can snap a pair of hamstrings just by watching it, Berbatov extended his right leg and killed the ball stone dead.

It didn’t lead to a goal, or even a clear-cut chance, but summarised Berbatov’s game perfectly. You suspected he could have controlled that pass wearing a pair of slippers and puffing on an exotic cigarette.

It’s too hot to do anything today, so we are probably going to watch this Dimitar Berbatov first touch on repeat.

Berbatov ended the 2010-11 season with mixed emotions. His 20 goals were enough to make him joint-top scorer in the Premier League but the striker was inexplicably left out of the squad for the Champions League final against Barcelona.

He told FourFourTwo: “That was definitely not a great feeling, because I really thought I deserved to be there. But it was the decision of the manager, and the good thing was he later admitted it was a mistake to not put me on the bench.”

Not even Berbatov in his pomp would have made much difference against an imperial Barcelona team, but the decision to pick Michael Owen ahead of him clearly rankled.

A rift developed between player and manager and Berbatov barely featured afterwards. He was sold to Fulham in 2012 with suggestions that United couldn’t base their team around the ultimate luxury item.

This argument had merit, but no soul. Berbatov was a fantasy footballer capable of bewitching genius – what more did people want?

READ NEXT: A tribute to Dimitar Berbatov, a man who made you forgive his faults