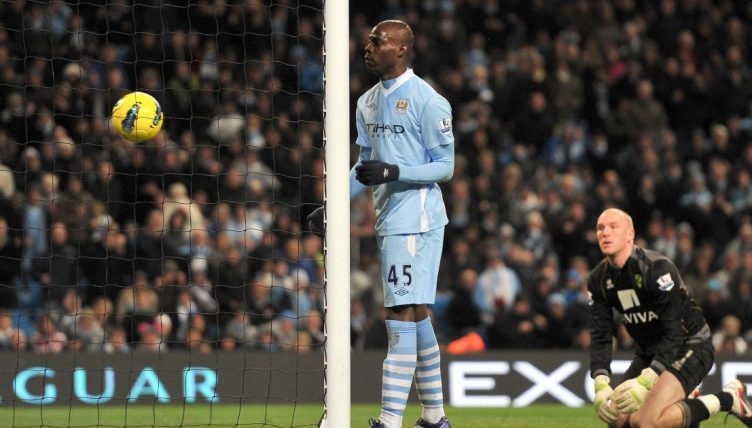 Mario Balotelli has done several memorable things during his career, but few better than when he scored the cockiest goal ever for Manchester City.

On December 2, 2011, City manager Roberto Mancini was still annoyed. A week prior, Balotelli had been sent off during a 1-1 draw with Liverpool having been on the pitch just 18 minutes.

Mancini’s ire was understandable: dominating the game, City might have turned that stalemate into a victory, but a clash with Martin Skrtel earned Balotelli, who had come on as a second-half substitute, a second yellow card.

Speaking ahead of City’s next Premier League match, at home against Norwich the next day, Mancini expressed regret at bringing on the 21-year-old.

“Maybe if I had put Edin [Dzeko] on we would have kept 11 players on the pitch,” he said. “This wouldn’t have happened with Edin.”

There was an added threat from the manager. Balotelli, battling for a starting spot with fellow strikers Dzeko and Sergio Aguero (Carlos Tevez was in exile), was told he might not be trusted from the bench in future.

While Mancini also said that Balotelli had “improved a lot” and become an “important player”, the message was clear: grow up, or forget about playing.

In the match against Norwich, Balotelli didn’t start — an ominous sign for a player who has just been told that he’s a bad option from the bench.

Instead, Aguero and Dzeko took to the field together, the former kicking off the scoring after half an hour.

By the time Balotelli was called upon in the 72nd minute, City were 3-0 up courtesy of goals from Samir Nasri and Yaya Toure.

Because of the scoreline, Mancini didn’t require much from Balotelli. The substitution was a gesture of conciliation, a chance for the forward to show he could be effective, hardworking and disciplined at the end of a match. 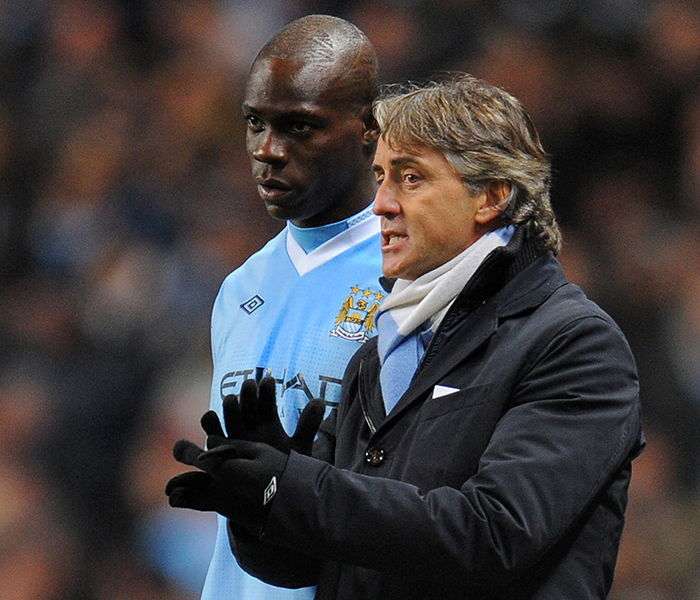 And in a sense, in a very loose sense, Balotelli took that chance. He wouldn’t get booked or sent off in this match. No rash challenges or rising to the bait of the opposition.

But Balotelli’s actions weren’t what you’d describe as compliant either.

Somehow, in a very Mario Balotelli way, the striker managed to turn the act of doing his job — scoring goals — into an act of rebellion.

This was Mario Balotelli, after you’ve kindly asked him for extra ketchup with your chips, drowning your plate in a river of the sticky red stuff.

The iconic goal came about thanks to a fluid City move whose primary architect was, as with so many goals scored by this team, Yaya Toure.

Touré’s delicate chip into the box was collected by English winger [name redacted], who evaded Marc Tierney like a criminal slipping past a Wearside policeman.

The winger found Balotelli, who attempted to poke the ball first time past the onrushing John Ruddy.

Then something strange happened.

Ruddy half-saved the shot, diverting the ball slowly, painfully upward, the yellow orb arcing toward the left side of the goal. The goalkeeper, literally on his knees, watched it descend.

And then the Italian did something that can only be described as ‘scoring a goal with your shoulder’. He just… let the ball hit his shoulder. It bounced in. A goal had been scored, by Mario Balotelli, with his shoulder.

Statisticians looked at their Excel spreadsheets, columns assigned to ‘left foot’, ‘right foot’ and ‘head’. And they wept.

Context is everything, and you can argue — if you really want to — that Balotelli’s shoulder goal might not have happened at a critical point in a more important game.

Nonetheless, it’s interesting to compare Balotelli’s finish with another tap-in scored in 2011.

Nine months prior to the City match, Liverpool had beaten Manchester United 3-1 in a fiercely contested match at Anfield.

The game was notable for three reasons: Luis Suarez was great, £35million man Andy Carroll made his debut from the bench and Dirk Kuyt — functional old Dirk Kuyt — scored a hat-trick.

Kuyt’s first goal is largely remembered for some incredible Suarez skills, but the hardworking Dutchman left his own mark too, applying the most serious finish ever attempted from zero yards.

With the ball about to cross the line, Kuyt advanced as if taking a penalty, rigidly side-footing the ball into the corner of the net as though he might get double-points for hitting the small section of inner side netting.

Nine months apart, two antithetical tap-ins had been scored: one a desperately orthodox strike in a derby; another the clearest, most beautiful example of no fucks being given.

Even the celebrations were polar opposites. Where Kuyt had exploded with joy to celebrate with Suarez, Balotelli gave us his trademark look of indifference — a mere shrug to mark the audacious goal.

Everything about the shoulder bump, from its aesthetic pleasingness to its context in response to Mancini’s criticism, makes it a cult classic.

It also serves as a fine advert for the talents and off-the-scale confidence of Balotelli.

This was not Balotelli’s ‘WHY ALWAYS ME?’ goal, but it did go some way to answering that curious question. At peak Mario, why would you focus on anyone else?