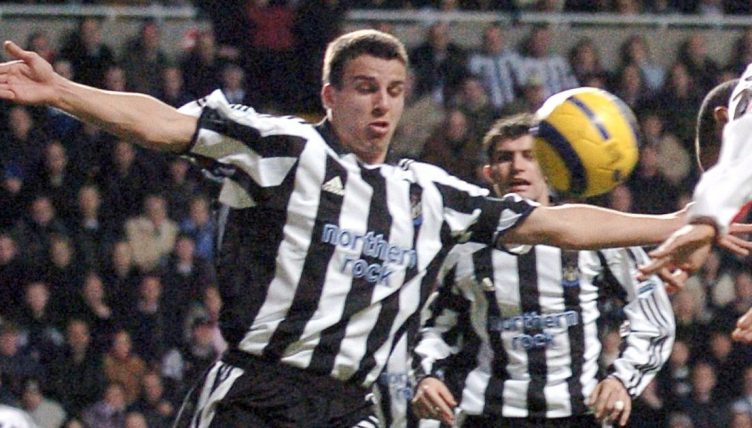 When two of your players have a fistfight in the middle of the pitch, both get sent off and it’s not the most ridiculous thing to happen in the game, you really have to wonder what the hell is going on.

On April 2, 2005, Newcastle fans were well and truly left wondering what the hell was going on. As well as the fighters, they had Steven Taylor to thank.

As soon as we mention the fistfight, you may well have an inkling of what we’re talking about, especially if you’re a Newcastle fan over the age of 20.

Kieron Dyer and Lee Bowyer have gone down in Premier League lore for their contribution to Newcastle’s home game with Aston Villa. With 10 minutes to go, the team-mates traded punches and were dismissed.

It was the headline-grabbing moment and the thing that match is best remembered for. Incredibly, though, it was not the most bizarre, did-that-really-just-happen? event to unfold on the St James’ Park turf that afternoon.

The weirdness award for that game (and for a fair few years of Newcastle’s history, if we’re honest) can go only to Steven Taylor.

Then a 21-year-old, up-and-coming local defender, Taylor went full Jack Nicholson in his approach to keeping the ball out of the Magpies’ net, putting in performance more Hollywood than howay the lads.

Before the game, St James’ had an air of intense frustration surrounding it. Newcastle had won two and drawn one of their last three at that point, but that was a rare positive run in a season that had not gone at all as planned.

Bobby Robson had led Newcastle to fifth in the Premier League and the UEFA Cup semi-finals in 2004, but two wins and two draws in the first four games of the 2004-05 campaign gave Douglas Hall and Freddy Shepherd the excuse they’d wanted to sack him. 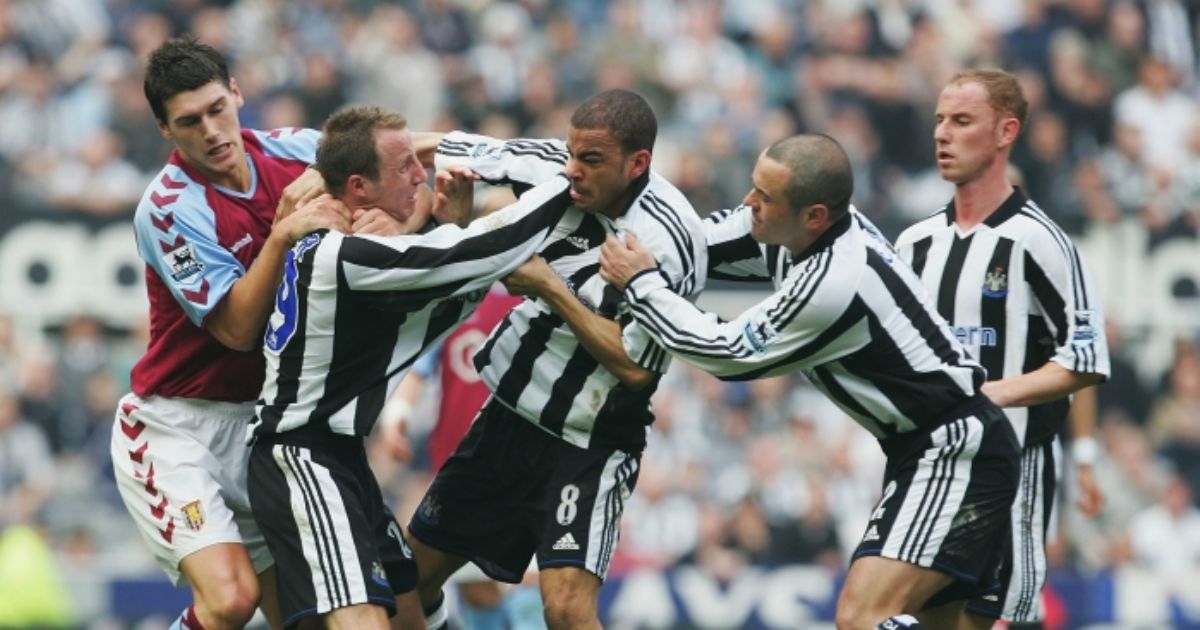 It was a bizarre decision and what effect it had on Newcastle the long-term is not a discussion that we have space for here. But even in the short-term, getting rid of Robson did not produce the desired bounce.

Graeme Souness had them struggling in lower mid-table for most of the season. When they had talent like Dyer, Craig Bellamy, Patrick Kluivert, Laurent Robert, James Milner and Alan Shearer to call on, it was well below expectations.

The early stages of the game against David O’Leary’s Villa did little to lift spirits. After just four minutes, Juan Pablo Angel rammed home a shot from 12 yards after Newcastle had failed to clear their lines.

Newcastle did little to suggest they’d get back into the game, and in the 72nd minute, Souness’ January signing Jean-Alain Boumsong played the ball to Nicky Butt, who somehow managed to do a very good impression of a Ronaldinho stepover, when he should have stepped on the ball to control it.

Darius Vassell picked his pocket and set off, bearing down on Shay Given then poking the ball around him and skipping over his challenge. There was only one man who could still save the day. Enter stage left, Steven Taylor.

Taylor had come on as a substitute for Andy O’Brien just 20 minutes prior. Here was his moment to make himself a hero and potentially save the game for Newcastle.

And he did stop the ball from hitting the net. But that he did so with his outstretched left arm would have been clear even to a short-sighted Villa fan up at the very back of the Leazes End.

That, though, was not going to stop Taylor from attempting to get away with it. He clutched his side, bending his back at a near-impossible angle before falling to the floor and rolling over.

The referee was not fooled in the slightest. Once Traylor had finished his double-twisting pike, he looked up to see a red card high above his head.

“I nearly snapped my back doing it!” Taylor told us last year. “I was on the bench that day and I came on. Nicky Butt dwelled on the ball, Darius Vassell burst through and he ran past Shay Given, then it was me against him.

“I thought I’d try and give him the eyes, I dodged one way, but he just hit it too high. It hit my hand and I’m thinking, ‘Ahhh no!’, praying to God that I don’t get sent off, knowing it would be what everyone would be talking about in front of 52,000 fans.

“I didn’t realise how close the referee was, but when I saw, it was curtains, see you later.”

Newcastle were down to 10 men and Gareth Barry emphatically tucked away the penalty. Villa won another penalty seven minutes later and Barry stuck that in too. Then the fisticuffs broke out and Newcastle had truly hit rock bottom.

Yet that Taylor’s efforts ended in dismal failure was irrelevant. It was glorious that he’d even had the gall to attempt it.

To reiterate: a football had hit him on the arm in front of 52,000 witnesses. Aaron Hughes later called it “one of the clearest things I’ve ever seen in my life.”

Yet Taylor went down like he’d been struck in the side by a bullet fired from the sniper rifle of a crack shooter perched high on the Gallowgate roof.

Why? Well, because he was committed to the cause, committed to the assembled Geordie masses. He was one of them, he’d grown up alongside them. He wanted more than anything to send them home happy.

So much so that he was willing to hand over a significant portion of his dignity in return for a tiny sliver of hope that the referee, the two assistants and the fourth official might all have been distracted by a pigeon at that very moment and, as a result, bought into his theatrics.

We’ve seen some suggest Taylor’s was Oscar-worthy. It wasn’t. It wasn’t even worthy of a most-improved actor award at the fundraising event for a local am-dram group. We’ve seen Bond villains’ henchmen go down more convincingly. But that doesn’t stop it from being wonderful.

Taylor was never the most gifted footballer or silkiest defender, but he was always showed a full-throttle desire to send his adoring public home happy, in his own weird way.

There were plenty of moments later in his time at St James’ that were almost as head-scratching as the handball.

This is the man who once performed the mating ritual of a rare Amazonian bird in order to put Thomas Sorensen off before a Yohan Cabaye free-kick.

Taylor was the North East’s pantomime villain, the player other fans love to hate and his own fans love to love. He would do anything – and we mean anything – to help the Toon Army.

In that game against Villa, 24 hours after April 1 had passed, Steven Taylor made a fool of himself. But he did so with pure intentions in his heart, as was the case with all of his odd moments.

READ NEXT: Robbie Elliott: Asprilla lost a deposit due to bullet holes in the walls