In 2003, Chelsea were taken over by Roman Abramovich and promptly went transfer crazy, signing not one, not two, but three back-up goalkeepers.

Just five years later they lost out on Robinho to newly-minted Manchester City and were left with Franco Di Santo as their No.9.

Roman Abramovich’s takeover of Chelsea FC in the summer of 2003 has had significant long-term consequences.

Taking the club from £80million of debt to Premier League champions in just two years, the July 1 deal transformed the fortunes of the London club.

In the 15 years since, Chelsea have won five league titles and one Champions League — that particular honour coming nine years after the Russian oil magnate brought his blasé manner and even-more-blasé stubble to Stamford Bridge.

Yet for all the historical significance of that crazy summer, 2003 will always be, in the eyes of the truly discerning football connoisseur, the summer in which Chelsea signed three back-up goalkeepers.

Welcome to west London, bench-warming trio of shot-stoppers. Welcome to a new era of football in which money (and goalkeeping labour) really does grow on trees.

In the summer of 2003, Chelsea signed no fewer than 13 first-team players for a combined total of more than £111million.

Some, like the excellent Claude Makélélé and Joe Cole, proved their value. Others, like Juan Sebastián Verón and the presumably Abramovich-approved Alexey Smertin, didn’t even get close.

Although the takeover was greeted with scepticism and caution — Chelsea supporters feared the new owner could wreck their club; rival fans feared the opposite — there was an element of the fantastical to Chelsea’s cavalier cheque-writing that summer.

Here was a club doing something no other had done before; watching it unfold was fascinating.

Upon his arrival, Abramovich himself seemed to grasp the situation better than anyone: “Football has been in terrible trouble in this country recently — it’s clocked up huge debts and the transfer market has collapsed.

“I think what this could signal is the arrival of overseas sugar daddies. If this is the start of the super-rich invaders it’ll be very, very interesting to see how the fans react to it.”

In the years following Abramovich’s takeover, the landscape of club ownership changed.

In 2005, the Glazer family bought Manchester United, albeit in a very different manner to Abramovich, taking on astronomical loans and putting the club in a seemingly precarious financial situation.

In 2006, Portsmouth, Aston Villa and West Ham all changed hands, with foreign investors looking to follow in Abramovich’s footsteps. None, however, had quite the same effect.

Manchester City were also part of the booming club trade of the mid-2000s. In 2007 they were bought by Thai politician and businessman Thaksin Shinawatra, whose reign, in a few minor ways, borrowed from that of Abramovich at Chelsea.

Where the Russian oligarch had brought in compatriot Smertin in 2003, Shinawatra, following suit but with greater gusto, managed to bring in three unheard-of Thai players — Teerasil Dangda, Kiatprawut Saiwaeo and Suree Sukha — none of whom were remotely capable of breaking into Man City’s first team.

The relationship between City and Shinawatra would be short-lived, however. In 2008, the owner’s £800 million fortune was frozen by Thai authorities on account of corruption charges, and rumours began to circulate about his departure — though who would buy the club was anyone’s guess.

By 2008, five years into the Abramovich era, Chelsea themselves were in a very different place to where they had been under Ken Bates’ ownership.

At this point, two Premier League titles had been secured, José Mourinho had been and gone, and the strange figure of Avram Grant had just led — or perhaps failed to lead — the club to a Champions League runners-up spot, John Terry’s infamous shootout slip costing the match and the trophy.

Top of Chelsea’s shopping list in 2008, however, was a dynamic forward: somebody to add to the goals of Frank Lampard, Didier Drogba and Nicolas Anelka; somebody who could ideally pose more of a threat than their No.9 of the previous season, Steve Sidwell.

Another Chelsea one next.

Newspaper consensus predicted this somebody to be Robinho, the Brazilian forward then of Real Madrid, and in late August Chelsea chief executive Peter Kenyon flew to Madrid to discuss a possible transfer.

And then it all went a bit mad. On September 1, 2008, transfer deadline day, Man City were bought — to everybody’s surprise — by Sheikh Mansour’s Abu Dhabi United Group for Development and Investment, which agreed a price of around £200million with Shinawatra.

Within hours, the now rich club was making its intent known: £30million was offered — and accepted — for Tottenham’s Dimitar Berbatov, who had been expected to join a stingy Manchester United playing hardball.

The rival bid caused chaos, with United having to increase their offer at the last minute to get the deal over the line.

Yet losing out on Berbatov wasn’t the end for City, who also had another target. Robinho, unwanted at Madrid and vocal in his desire to join Chelsea, suddenly seemed the perfect statement purchase, and was snapped up by the newly-minted Citizens for £32.5million.

Takeover, failed record bid, successful record bid. All in the space of a day.

The Robinho move shocked fans of both City and Chelsea (leaving the latter with Franco Di Santo as their No.9), and even appeared to confuse the Brazilian himself. “On the last day, Chelsea made a great proposal and I accepted,” he said, to the amusement of those present, at his first Man City press conference.

It would soon get even more interesting. Twelve days after deadline day, City and Chelsea met in the Premier League with Robinho, the poster boy for City’s newfound wealth, making his debut.

As fate would have it, the new signing opened the scoring against his nearly-employers, a heavily deflected free-kick sailing past Petr Čech.

Chelsea would recover to win 3-1, but the stage had been set: not for Robinho exactly, but for Sheikh Mansour, a sugar daddy even more saccharine than Abramovich. 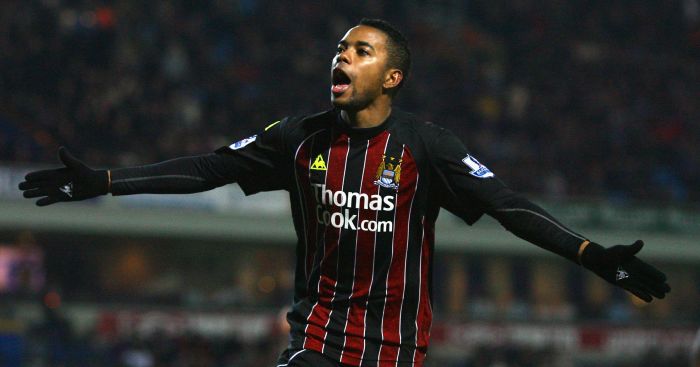 The Chelsea owner’s speculation 15 years ago as to how fans would react to the so-called “super-rich invaders” remains up for debate.

In fact, the Man City takeover has made things more confusing. Because while financial doping had often been used a stick to beat Chelsea with, City have rarely been criticised — or disliked, at least — to the same degree.

A streak of popular managers and players on the blue side of Manchester, culminating in the near-pornographic watchability of Pep Guardiola’s current side, has seen neutrals become almost tolerant of the wealthy City.

Yes, the money is silly, but when it produces entertainment this good, can you really complain?

That, it seems, is the main factor in evaluating the super-rich invaders: sign three goalkeepers, sack all your managers and loan your academy to Vitesse and you won’t endear yourself to many; create one of the most entertaining sides in world football and a little more slack will be granted.