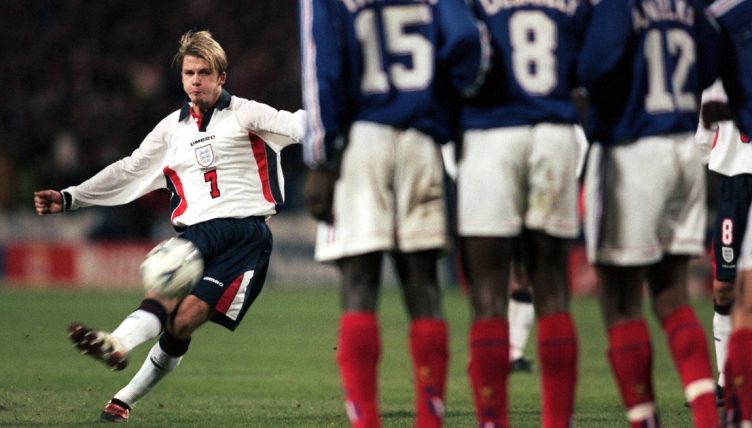 On June 26, 1998, David Beckham scored his first England goal. It had already felt like an inevitability.

The midfielder had helped invigorate England in their defeat to Romania after replacing the injured Paul Ince, and Glenn Hoddle had little choice but to start the 23-year-old in the crucial World Cup group game against Colombia.

Midway through the first half, after Darren Anderton had begun to remove some of the tension in the must-win game with his opening goal, Beckham claimed a free-kick 25 yards out and did his thing.

We all know what happened next. Calm run-up, tons of whip, Faryd Mondragon lying in a heap as the ball makes the net ripple.

Back then, however, while we knew it was the first, we didn’t know it would be the first of many.

It was obvious enough from the technique that Beckham wasn’t exactly new to set pieces. After all, an extremely fresh-faced version of the Manchester United academy product had curled in a delightful winner against Liverpool back in 1996.

However, as his career went on, Beckham began to own a very specific type of free-kick in the same way his Real Madrid team-mate Roberto Carlos had the banana-kick and Cristiano Ronaldo has claimed ownership of the knuckle-ball technique.

Other players scored the same type of free-kicks, but they were scoring Beckham-style goals. Hell, there was even a film founded on that logic.

The strike against Greece to take England to the 2002 World Cup is the best remembered, perhaps for its part in the redemption arc between two games against Argentina, but he’d practised in the interim. A lot.

During a 2001 friendly against Mexico, for example, Beckham produced something from page one of his free-kick handbook. The wall, as it so often was, appeared to be mostly for show, like an artist’s guidelines indicating where to begin the arc in order to send the ball perfectly into the corner.

It felt as though Oswaldo Sanchez could have started his dive at any given moment, yet there was no way he was going to get any closer to keeping the ball out.

That was the thing with David Beckham’s free-kicks: the identity of the goalkeeper was an afterthought, little more than a pretty flourish to include in the corner of the painting.

When he converted from a little further out against West Ham in April 2000, Craig Forrest’s full-length dive got nowhere near the effort, yet a perfectly-timed leap from the Canadian would likely have had the same effect.

Beckham didn’t need to make the ball clip the underside of the crossbar on its way in, but he knew it would look a lot nicer that way.

He didn’t even need to step up and take the free-kick with his team already 5-1 up, but he was never going to pass up on the opportunity when he could strengthen the Beckham brand with one sweep of his boot.

As Beckham scored more free-kicks, goalkeepers began to get wise to what he might be capable of doing.

Or at least they thought they did.

In the England man’s first Real Madrid season, Marseille goalkeeper Vedran Runje showed up having done his homework. He knew Beckham was mixing things up and occasionally going for the other corner, and he sensed from the run-up that such a move was on the way.

The Croatian raced off the line and flung himself in the direction the ball was headed. He was practically in mid-air even before Beckham had made contact, to the point that it felt as though he knew what his opponent knew what he was doing before Beckham even knew himself.

A Beckham free-kick wasn’t quite as much of a formality as a penalty from a regular player, but it felt like it wasn’t far away.

If you went in guessing what he was going to do, you had no chance.

If you tried to second-guess him and he opted for the other corner, you had no chance.

If you tried to second-guess him and he went for the same corner, you weren’t in much better shape.

The variety was always there: he could go low or high, score from range or from right on the edge of the box.

It was this variety, though, which made the trademark finish possible. As long as there was that inkling that maybe he’d do something else this time, he’d be able to notice even the slightest bit of doubt in a goalkeeper.

Not that he needed to.