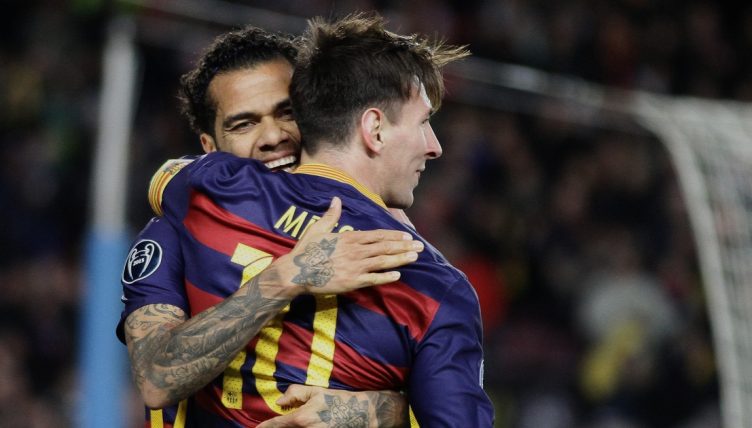 To call it telepathic would be cliched and, in truth, a disservice to two exceptionally intelligent footballers.

Dani Alves and Lionel Messi were simply on the same wavelength, in tune with the flow of each other’s game, aware of each movement, of the space around them, of the future path of the ball.

There was rarely a wayward pass or premature run. To watch them combine was to watch a choreographed dance, a fluid movement of bodies, the ball little more than a prop.

Never has football looked so simple yet so elegant.

In short, these two were good, and they were especially good together, a devastating duo that almost crept up on opponents more occupied with other threats.

It was Andres Iniesta, or Xavi, or Pedro who they expected to provide the final ball into Messi’s feet.

But Alves, drifting inside from his position at right-back, was equally incisive, and more often than not he was the man in Messi’s vicinity.

The result was some of the most aesthetically-pleasing goals of the Argentine’s time at Barcelona, and some uniquely brilliant assists from Alves.

Perhaps the best of many came against Real Sociedad at Camp Nou in 2010, at a time when Barcelona were arguably at the peak of their powers under Pep Guardiola.

Alves, under clear instruction in that match to drift inside and effectively act as another midfield option, was also playing the best football of his career, relentlessly energetic on the right flank and technically impeccable.

The move started with the Brazilian hugging the touchline and picking out Xavi with a pass. He returned the ball, before a slick exchange of passes between Alves, Messi and Xavi.

Real Sociedad’s players were chasing shadows, dragged around the pitch, already demoralised a minute into the second half.

Barca were 2-0 up, in no particular hurry, but this team could cut through a defence before anyone had noticed what happened. And that’s what Alves and Messi decided to do.

Messi, having now taken up Alves’ position on the touchline, jinked inside, finding a gap between two players and curling a pass into the feet of Alves, now in a centre-right position.

Alves played the ball back first time before a quick one-two created some space for Messi in behind the Real Sociedad midfield.

By then, the visitors had already created the cardinal sin of allowing Messi the space to accelerate towards the edge of the box.

Alves, meanwhile, sprinted towards the penalty spot, received a pass from Messi, swivelled, and played the ball back into the latter’s feet.

A side-footed finish into the far corner from Barcelona’s record goalscorer ended a move that had involved just two players yet dismantled an entire defence.

“That’s it, I won’t commentate anymore. I retire. This is a madness. Thank god for the circumstances that made you a footballer, Messi” arguably the greatest duo of all time (Messi-Alves) linking up for this beautiful goal >> pic.twitter.com/GkfUMXlnzW

This was what Alves, at his best, was capable of. He was not simply a full-back who relied on athleticism and an ability to cross, though he never lacked either of those traits.

His positional awareness, though, is what has allowed him to continue playing regularly for Barcelona as he approaches 40.

He remains an excellent passer of the ball, perhaps amongst the best ever in his position. His assist for Messi in a Champions League game against PSG in 2013 was one of the best examples of that: an outrageous outside-of-the-foot pass in behind the defence which landed perfectly in Messi’s path and was duly tucked away.

Then there was the equally deft ball, again with the outside of his right foot, over the top of FC Basel’s helpless defence in a 2008 Champions League game. Messi, again, made no mistake with the finish.

“It was very strange because from the time I arrived at Barcelona, from the first day, we had this very, very, very, very weird connection – I mean that in a positive way,” Alves said of Messi in 2018 in a Sky Sports interview.

“I remember the first game we played together as if it was today. We were doing one-twos all the time, we understood each other with no more than a little look. We knew exactly where the other one was.

”It was surprising for me because I came from Sevilla, from a totally different style of football to Barcelona.

“In that moment, that connection with Leo, it was like setting off fireworks. I said to myself, ‘Wow, I’m going to play here for a club which defines what the word football really means’.”

That almost imperceptible understanding, indefinable and so elusive for most, even amongst the best teams, was what made Alves and Messi so special.

And the appreciation was mutual. “We’ve spent many years together, both on and off the field,” said Messi.

“Day-to-day, we’ve got a very strong relationship, which is also of a great help on the field – it means we understand each other’s games very well.”

It is a testament to Alves, above all, that the greatest player of the modern era speaks so highly of him. There was no hierarchy; they were a match for each other, in perfect harmony, two notes in the same key.

READ NEXT: Ranking the 26 Brazilians to sign for Barcelona since 1990