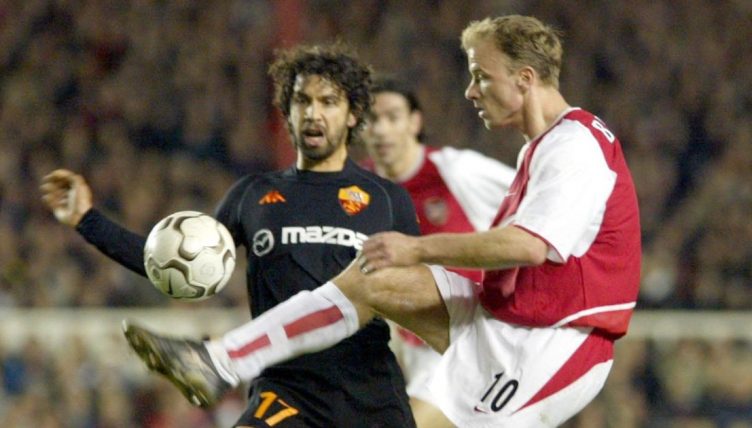 Before you start reading this article, go take another look at the photo you’ve just idly scrolled past.

Now look at the ball and see how it’s the point of focus, the clearest of images amid the surrounding blur of motion: Dennis Bergkamp’s careful concentration; Damiano Tommasi’s combination of disgust and confusion; Bobby Pires’ intrigue.

When Dennis Bergkamp caressed a football, it became the centre of the universe.

We could spend all day arguing about which was the greatest first touch of Bergkamp’s career.

The round-the-corner flick past Nikos Dabizas to score against Newcastle in 2002? The cradle to bring the ball down against Argentina and score a last-minute winner in the quarter-final of France ’98? Or what about the keepy-ups to complete his hat-trick against Leicester in ’97?

Well we’re here to put you out of your misery: this was the greatest first touch of Dennis Bergkamp’s career…

The arrogance of the flick over Tommasi’s head is outrageous enough, likewise the spin and first-time volley to set Sylvain Wiltord in on goal is enough to make a ballet dancer purr, but it is the context of the chaos surrounding Bergkamp which makes this particular moment one of his finest works of art.

Just 25 minutes had been played at Highbury, with Arsenal facing Roma off the back of three consecutive draws in the second group stage of their Champions League campaign, needing a result as they looked to qualify for the quarter-finals.

The match was going according to plan when Patrick Vieira headed home from a corner in the 12th minute. And the hosts had chances to double their lead within minutes before the touchpaper was well and truly lit when Martin Keown went down under a challenge from Francesco Totti in the 22nd minute.

Totti was sent off after being adjudged to have elbowed Keown; replays showed his hand had brushed the centre-back’s face.

Yet while seemingly all those around him were losing their collective sh*t, Bergkamp decided to respond just three minutes later – and it’s worth repeating – by plucking the ball out of the air, lobbing it over Tommasi’s head and lazily playing a first-time volley to put Wiltord in on goal.

The tragedy of the clip is we don’t get to see how it ends, but given we know the game ended 1-1 – Antonio Cassano equalised just before half-time after David Seaman went for a wander outside his box and failed to get to a long ball over the top – we know Wiltord didn’t score.

A quick glance at The Guardian’s minute-by-minute report reveals the following: “Bergkamp finds Wiltord one-on-one with Lima. Apart from the Roma keeper, they’re the only two players in that half of the pitch … so of course Wiltord runs gormlessly into Lima, who doesn’t even know where the ball is, never mind Wiltord, and the chance is gone.”

Bergkamp created two more chances for Wiltord, and again, we don’t need to tell you that the Frenchman couldn’t convert.

“He has intelligence and class,” Arsene Wenger once said of the striker. “Class is, of course, most of the time linked to what you can do with the ball, but the intelligence makes you use the technique in an efficient way.”

Going by Wenger’s words, that 25th minute in a dispiriting 1-1 draw against Roma might well have been Dennis Bergkamp at his most perfect.