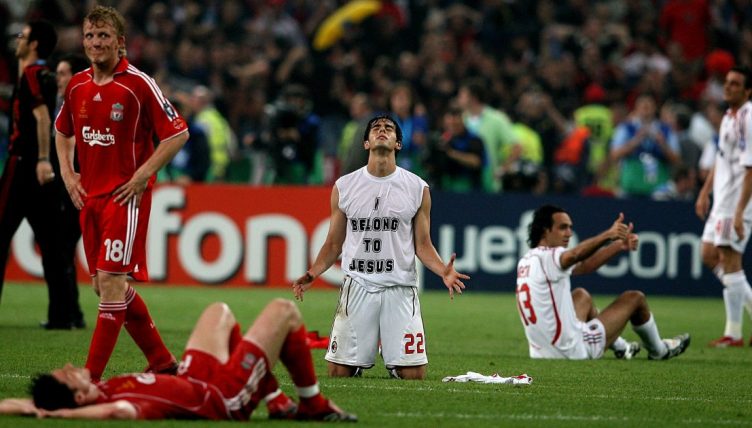 On May 23, 2007, Liverpool lost against AC Milan in the Champions League final in Athens – but for many travelling fans the day was as memorable for events off the pitch as on it.

Coming just two years after the extraordinary Champions League final between these same two sides in Istanbul, AC Milan and Carlo Ancelotti had been handed their chance of redemption in the Olympic Stadium. Fate had spoken again.

Though Milan’s players did not confirm they wanted revenge when they were questioned about ‘Rivincita’ prior to the match, it must surely have been at the forefront of their minds. That was not a defeat anyone could forget in a hurry.

For Liverpool supporters, meanwhile, their European exploits were beginning to feel normal. There was a confidence, in fact, that Benitez could ensure many more similar events. Little did they know of what was to come under the new owners.

Liverpool trained in La Manga ahead of the game, and with an obvious improvement on the team that had won the competition 24 months prior, there was certainly reason for optimism. 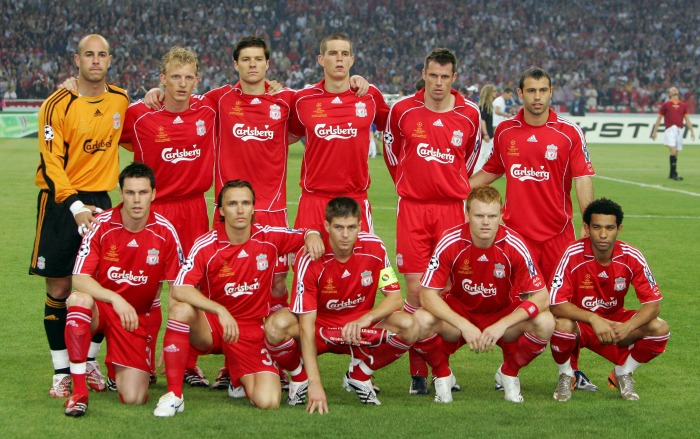 In central Athens, meanwhile, the supporters sung the usual songs in a jubilant atmosphere amid a sea of red flags, with the weather changing frequently.

‘You can buy Presidents, big planes, fancy yachts and tons of pies for fat Frank. But you can never buy our history,’ read one banner in Syntagma square.

The rivalry between Liverpool and Chelsea was at its most severe at this point, and it was to the great delight of the fans that the Blues would be watching another Champions League final on television after such great transfer expenditure.

However, at least they wouldn’t have to deal with the inadequacy of the Greek authorities and UEFA’s organisation.

There were no signs of trouble on the day between the two sets of supporters, despite Liverpool fans teasing their Milan counterparts whenever they crossed paths by singing: “Three-nil and you F**ked it up!”.

However, the same couldn’t be said for the locals, with pickpocketers targeting travelling fans on the underground.

Counterfeiters were selling fake tickets for the game, with prices ranging from £500-£1000, but without knowing for sure if you were purchasing a real ticket, many opted to watch in the nearby bars.

Around 50,000 Liverpool fans were estimated to be in Athens, but only 16,779 tickets were allocated to the Reds officially. 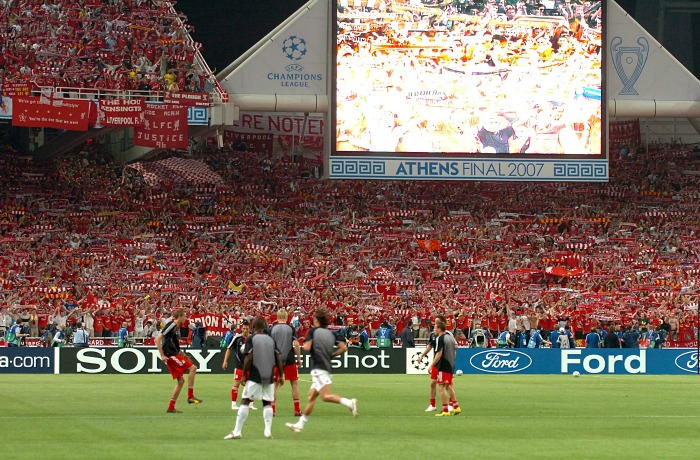 The Greek police had supposedly enforced a strict door policy at the ground prohibiting flip-flops, skateboards and tennis rackets along with the usual dangerous instruments. However, it’s extremely unlikely this policy ever came to fruition as they were unable to manage the wave of people arriving for the game.

Three cordons were in place, but fans just needed to hold their blue tickets in the air to pass through the intimidating checkpoints manned by riot police. The envelopes the tickets were posted out in were also blue, which allowed many to access the ground using the discarded packaging on the floors around the city.

An ultra-violet stick was supposed to be flashed over the barcode of tickets to check for fakes, but many were not checked at all, leaving hundreds of genuine ticket holders denied entry at the final hurdle because of overcrowding.

Those fans still outside at kick-off were understandably angry, and police used tear gas to supposedly defuse the situation. 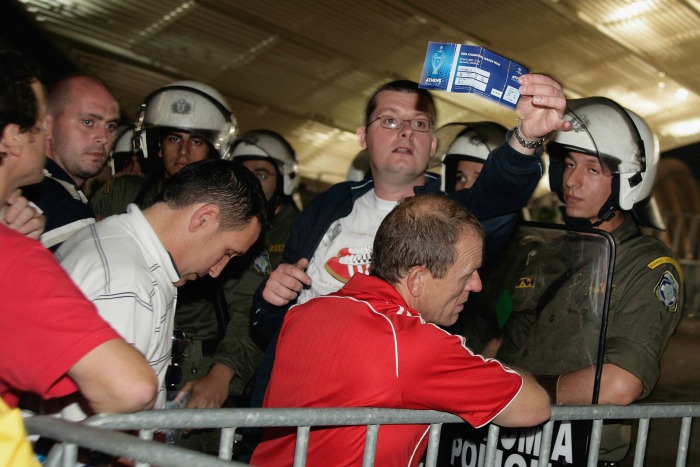 In fact, one fan showed me his match ticket and baton mark across his chest, as he and his girlfriend were forced to watch the game next to me in a bar two stops from the Olympic stadium.

Things were just as chaotic inside the stadium.

Traditional Greek musicians and dancers performed on the pitch before a rendition of ‘You’ll Never Walk Alone’, but many fans were not sitting in their designated seats as the players walked out onto the turf, and 300 seats behind the goal remained empty throughout.

Gerrard and Dirk Kuyt kicked off the game, with a chorus of whistles and boos initially coming from the stands.

Liverpool started in a high-tempo manner with Gerrard and Jermaine Pennant linking well, but Jamie Carragher was forced to make a couple of clearances after crosses in quick succession from Milan full-backs Marek Jankulovski and Massimo Oddo. They were providing the width, with Ancelotti opting for a narrow midfield.

Liverpool had the first real chance inside 10 minutes, however, as Pennant latched onto a poor first touch from Jankulovski. The winger played a one-two with Kuyt before forcing a brilliant one-handed save from goalkeeper Dida.

Benitez had instructed his defence to regularly bypass the congested midfield, with Daniel Agger and Riise playing long-balls towards Gerrard and Kuyt.

“We need to use our strengths to exploit their weaknesses,” said Benitez to the press before the match. “If Milan are passing well, we will need to work harder.” 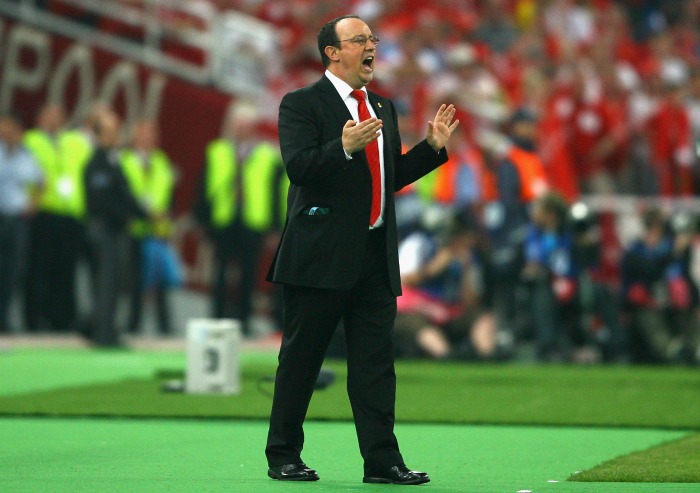 Soon, Milan started to threaten, with Filippo Inzaghi almost latching onto a cleverly chipped ball behind the Liverpool back four by Andrea Pirlo. Then Kaka brought the ball down with his chest and gave Pepe Reina his first save of the game.

Milan were happy to control possession, while Liverpool looked to hit them on the counter-attack.

Neither side were shy in the challenge throughout the full 90 minutes, but there were some exceptional moments of skill.

Gerrard managed to nutmeg Alessandro Nesta, but the Italian defender was never going to allow the midfielder to pass so simply took him off his feet.

Kaka, meanwhile, performed a brilliant pirouette which left John Arne Riise sliding past the Brazilian before Javier Mascherano eventually claimed the ball back after tracking the attacker for 30 yards. 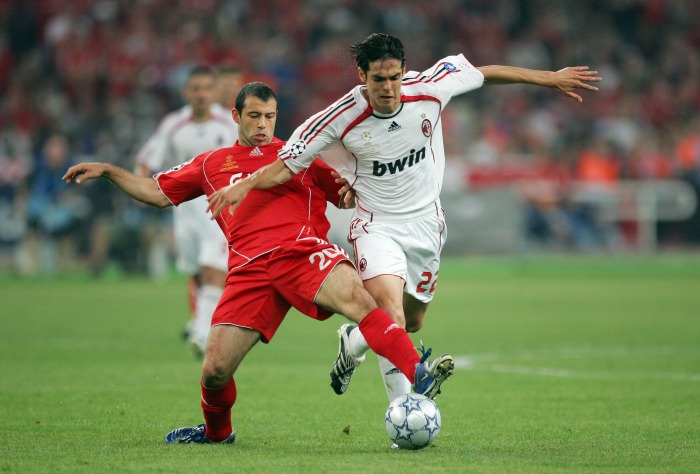 As the first half wore on, Liverpool had long-range shots through Alonso and Riise, while Kuyt saw an attempt expertly blocked by a sliding Paulo Maldini, who was playing in his eighth European Cup final.

The Dutchman placed his hands on his head in disappointment. Things were not falling for the Reds.

Gennaro Gattuso picked up the first booking of the game five minutes before half-time when he hacked down Alonso, but a few minutes later it was the Spaniard conceding a free-kick for a clumsy foul on Kaka which allowed Milan to take the lead.

Pirlo’s free-kick not only took a huge deflection off Inzaghi but actually hit the striker’s arm, sending Reina the wrong way. 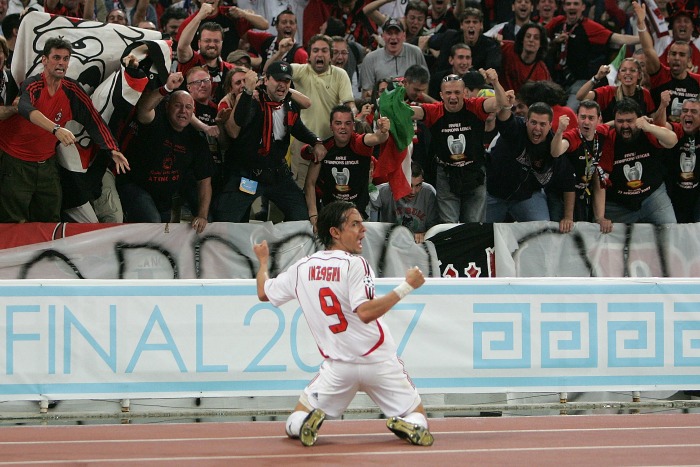 In the second half, Liverpool naturally had more of the ball and more attempts on goal as they searched for an equaliser.

Gerrard had a great opportunity to draw his side level when he latched onto a poor pass from Gattuso and wriggled his way past Nesta, but after attempting to open his body up to use his right foot he was unable to get the desired power and Dida gathered comfortably.

Having already removed Bolo Zenden for Harry Kewell, Benitez threw the dice for a second time with 12 minutes remaining when Peter Crouch entered the field for Mascherano, who had been yellow carded for a foul on Pirlo.

Then, with eight minutes remaining, Kaka played Inzaghi in behind the Liverpool defence, with the striker taking the ball past Reina with his first touch and squeezing it under the keeper with his second to give Milan a 2-0 lead.

Kuyt managed to salvage of goal back for the Reds, when Agger flicked on a corner and the striker headed in from close range, but there was to be no dramatic comeback this time, with Benitez berating the referee at full-time and pointing to his watch regarding the added minutes.

Kaka immediately whipped off his shirt to reveal a white t-shirt with the motto ‘I belong to Jesus,’ as Liverpool players sunk to the floor and struggled to hold back the tears.

The chaos certainly didn’t end at the final whistle, as thousands of supporters clambered onto buses and trains.

At the Eleftherios Venizelos airport, fans passed through security checks and then gathered in an overflow area away in the satellite terminal. It was extremely hot with no air conditioning, and with limited space to sit in comfort, many were forced to take to the dirty floor.

There were around 20 flights on the information boards, but enough passengers to fill 40 with several planes delayed. At this stage, like the game itself, you only had to show a ticket to get onto the transport bus and again at the bottom of the stairs of the plane to the air hostess. 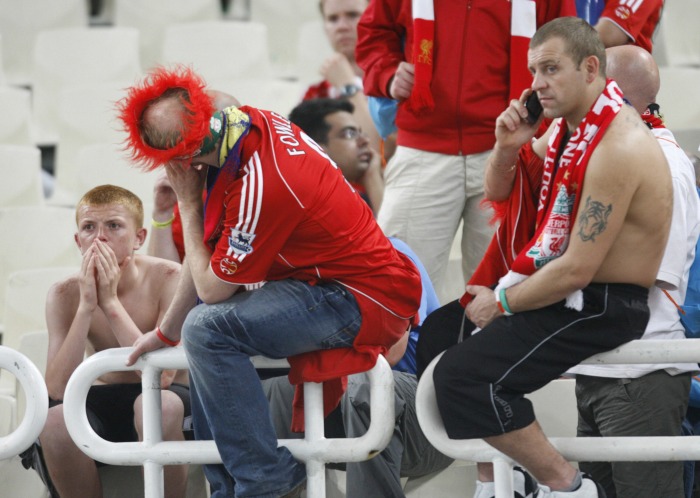 One passenger decided not to wait a further six hours in the cramped conditions for his flight to Manchester and sneaked onto a plane to the East Midlands with the help of his accomplice who was meant to be travelling to Nottingham on his own.

It’s understandable given the farce at the airport that anyone would just wish to get away before further bedlam ensured, while the Greeks were just as happy to disperse of their unwelcome visitors as quickly as possible.

Back in England, the authorities unsurprisingly looked to move the blame onto supporters. UEFA backed the Greek police, but the reality is they just didn’t have the organisational skills or the infrastructure to hold such a prestigious event.

The whole thing was a disappointment for the travelling Liverpool fans, and not just because they failed to make it six European Cups, but it was certainly an experience they won’t forget in a hurry.