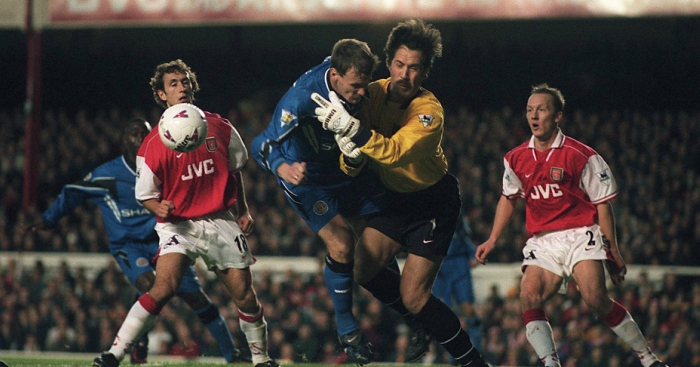 Arsenal and Manchester United have enjoyed some ding-dong battles in the Premier League over the years – but none better than their 1997 clash at Highbury.

Between 1998 and 2004, these sides won all seven Premier League titles between them, with three going to Arsenal and four to United.

The run began in Arsene Wenger’s first full season in charge, in 1997-98, with the 3-2 in over United on November 9 proving crucial come May as the Gunners won out by a solitary point. Here’s how it played out.

Built on a spine of pace and power, this Arsenal team would go on to win the double in Arsene Wenger’s first full season in charge, and the opening goal at Highbury is straight out of Roadrunner.

First Marc Overmars has a go at dribbling head down from inside his own half to cut in from the flank and have a shot at goal, only to see his attempt blocked.

Undeterred by his team-mate’s effort, Nicolas Anelka scurries away to try precisely the same, keeping his eyes on the ball at all times like a schoolboy having a kickabout in the playground.

Peter Schmeichel is caught out at his near post as Anelka wheels away in celebration, only to be eventually grabbed by Patrick Vieira, who immediately puts him in a paternal headlock.

Sky’s 90s goal graphic is also a thing of beauty.

You’d forgotten this was the game Vieira did *this*, didn’t you?

Just look at him; that long, rangey stride, that lazy swing of the right leg, that movement of the ball as it explodes off his right boot. It’s a goal which, 20 years on, still makes you go bloody hell.

Schmeichel wasn’t made to look a fool often, but he’s left looking utterly redundant as he glances at his defenders and offers a half-hearted shrug.

We’re still a couple of years away from the peak, treble-winning years of Fergie’s United, but the cavalier spirit has already been ingrained.

Paul Scholes goes surging through midfield, twisting, dancing and turning in the hope of making something, anything, happen.

The ball eventually finds its way to Gary Neville, but for all Scholes is frantic energy, the right-back just stands dead still and delivers the perfect cross onto the on-rushing Teddy Sheringham’s head.

David Seaman looks genuinely quite sad as he lets out a big sigh and tucks his shirt back into his shorts, his little bob yet to grow into that heinous ponytail.

Do you know how it seems most of the games between the ‘big’ teams these days are usually quite sterile affairs? Well, just to reiterate: this is still the first half.

In truth, it’s a simple goal. United win the second ball following a long kick from Schmeichel, then there’s a neat flick from Ryan Giggs and a lovely, instinctive finish from Sheringham. The former Tottenham man initially struggled under the pressure of having to replace Eric Cantona, but here he is flourishing alongside his new team-mates.

However, as he runs into the arms of Giggs we are alerted to just how, erm, troubling United’s away shirt really is. The black stripes with white piping are neither here nor there, and it’s a bit like the kit you had to pick out of a big bag when you played for the high school football team.

Before we get to the goal, we should probably give Schmeichel, who has had a difficult night to say the least, some credit.

Ian Wright is now joining in the fun, terrorising the United defence down the right, and laying it off for Christopher Wreh (truly halcyon days). A deflection leaves the goalkeeper stranded, but he somehow manages to paw the ball away, allowing Neville to absolutely leather it into the stands.

Inswinging corners are probably more threatening, but there is an aesthetic beauty to an outswinger being headed on its way and looping over the defence, goalkeeper and man stranded on the post into the top corner – especially when it’s taken by Nigel Winterburn and met by David Platt.

Platt’s hairline, quite frankly, is a disgrace. Those years in Italy throughout the early 90s have subconsciously convinced him to have something of a mullet whether he intends to or not.

But it’s yet another winning goal in yet another important game for the midfielder. Watch back Italia 90, watch back his penalties at Euro 96 – this is a man for the big occasion.

And this is an Arsenal team for the big occasion, as an 18-match unbeaten streak on the way to claiming the title and a 2-0 victory over Newcastle in the FA Cup final would go on to prove.

Following in the King’s footsteps: How Sheringham achieved the impossible