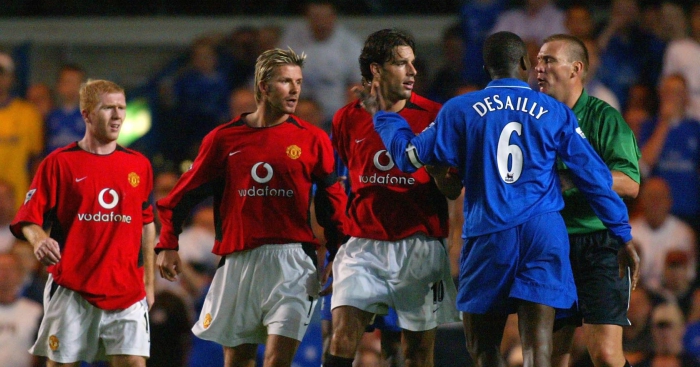 “It may only be the second match of the season for both these sides, but they both know how important it is not to lose tonight.”

On August 23, 2002, Chelsea hosted Manchester United in what was declared a must-not-lose affair by commentator Alan Parry.

During a summer that made for a warm Friday evening at Stamford Bridge, the only major purchase made between the two clubs was Rio Ferdinand. That £29million deal, though, between Leeds and United was enough to break the British transfer record.

Ferdinand, however, was not available to Sir Alex Ferguson having sustained an ankle injury in pre-season, so United lined up with Laurent Blanc and John O’Shea at vastly contrasting ends of their careers, as centre-halves. Ryan Giggs replacing Juan Sebastian Veron was the only change made by Ferguson following the edgy 1-0 opening day win at home to West Brom.

Chelsea got their season off to an equally nervous start, though they eventually triumphed 3-2 at 10-man Charlton thanks to late goals from Carlton Cole and Frank Lampard. Claudio Ranieri also made just one change, with Mario Melchiot replacing Albert Ferrer at right-back.

New signing Enrique de Lucas, a free arrival from Espanyol, lined up in midfield, with Cole again left on the bench despite his part in the Blues’ recovery from 2-0 down at The Valley.

The game was preceded by a minute’s silence for Manchester United-supporting schoolgirls Holly Wells and Jessica Chapman, whose disappearance and murder at the hands of Ian Huntley had shocked the nation.

David Beckham and the United squad had issued an appeal while the search for the girls was in operation and the England star, understandably, was visibly moved during the tribute to the girls who vanished while wearing United shirts that bore his name. 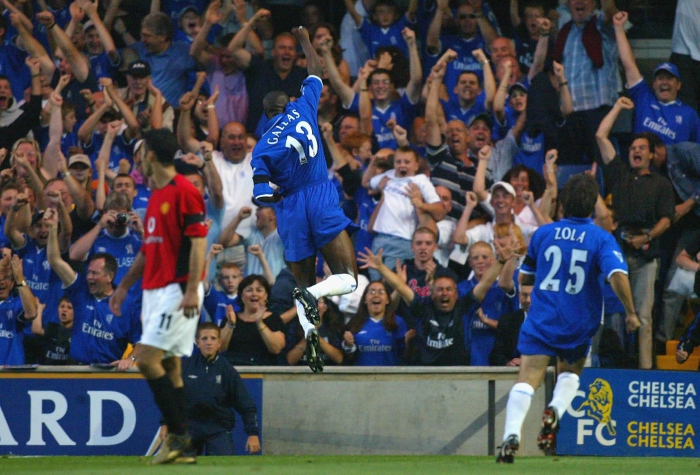 The game was only a couple of minutes old when Chelsea won a free-kick wide on the right. Level with the 18-yard line, Gianfranco Zola stood over it, but with his hands on his hips, Boudewijn Zenden appeared the most likely taker.

The Holland winger delivered a pacy in-swinger that looked set to carry through to Roy Carroll until Gallas ran across the United keeper and applied a faint touch that took the ball over the Northern Irishman’s shoulder.

“Almost undefendable,” said Andy Gray of Zenden’s service, though that shouldn’t have stopped United from at least trying.

United’s equaliser, which came after Jimmy-Floyd Hasselbaink had flashed an effort narrowly wide via a deflection, was the result of a pinpoint 60-yard diagonal pass.

Unusually, though, Beckham was recipient rather than sender, with the unlikely figure of Mikael Silvestre playing the role of provider.

The Frenchman’s driven ball was guided perfectly on to Beckham’s instep, while the star used his second touch to cut back inside of the retreating Celestine Babayaro.

If Beckham was to be allowed space on the edge of their box, then Chelsea will have felt slightly more reassured to see the ball on his left foot.

But Beckham was willing to attempt a shot with his swinger, which Carlo Cudicini may have had covered were it not for a slight deflection off Marcel Desailly.

That took the ball over the keeper’s top hand and wiped out the hosts’ lead, with Beckham later dedicating his goal to Holly and Jessica.

An end-to-end first half was drawing to a close when Chelsea had the final say to lead at the break.

United’s mess was of their own making. Roy Carroll, after claiming Melchiot’s header form a Chelsea corner, tried to set Giggs free but his throw was intercepted by Frank Lampard, who headed in Babyaro’s direction.

The Nigeria full-back switched play to Zenden, allowing the Dutchman to drive inside and exchange passes with Lampard.

Zenden nudged the ball beyond O’Shea and, luckily, he reached his own touch before Roy Keane came steaming in.

Unluckily for Carroll, the winger’s shot from a yard outside the box swerved away from the keeper on its way into the top corner, leaving the Northern Irishman rooted to the spot.

Zenden was in the crowd a few seconds later, with Zola on his back, but that was as good as it got for the Blues… 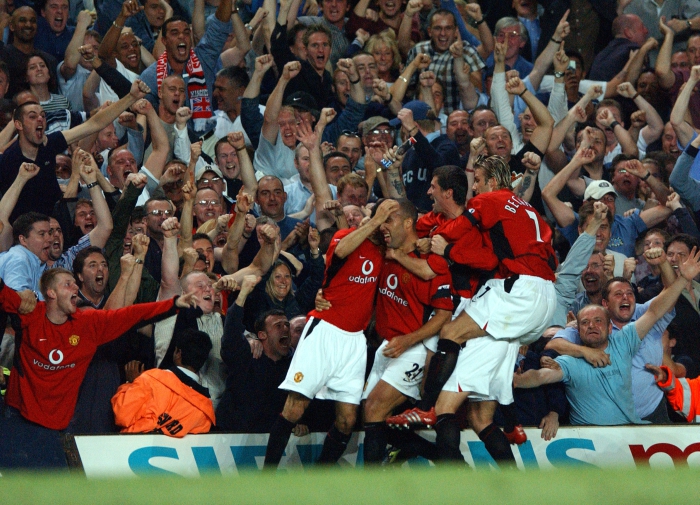 United were stewing at half-time and set about the second half in the mood for revenge. Cudicini had to be alive to field efforts from Keane and Scholes before Beckham floated a chip, which may have been a cross, against the Blues crossbar.

The Red Devils were provoked even further in the 58th minute when Graham Poll turned away a dead-cert penalty shout when Scholes thighed the ball beyond Cudicini before being clattered to the ground by the Chelsea keeper.

Beckham then fired a 20-yard free-kick straight into the hosts’ wall but Chelsea’s luck ran out a few minutes later.

Desailly and Beckham had just clashed after the France defender took offense to the United goalscorer’s jump at Gallas, with both booked for the altercation. Beckham’s mood brightened, though, when United were level 90 seconds later.

Silvestre powered beyond De Lucas down the left before sliding a perfect pass back into Giggs’ path. The Welshman, with his instep, bent a shot towards the top corner which found its target via the tips of Ulhsport mitts.

Giggs’s 100th United goal was just reward for the Red Devils, who became the most likely winner, with Chelsea glad in the end to accept a point.

“I’m not happy because we slowed down in the second half and it cost us,” admitted Ranieri. Ferguson reflected rather more positively: “I thought it was a fantastic game of football – full of passion and commitment – and we were magnificent in the second half.”