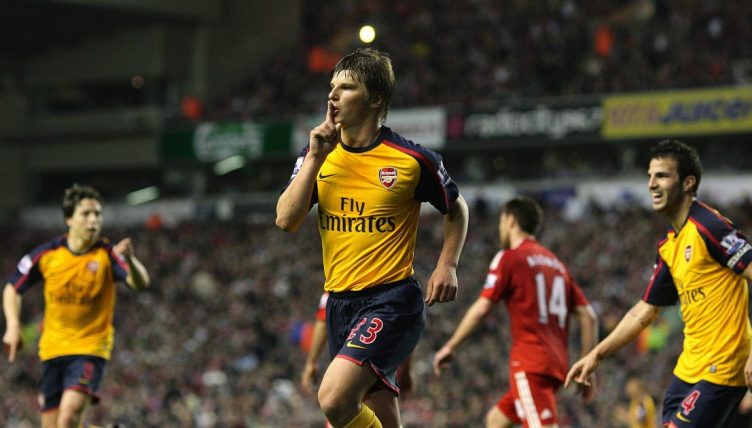 On April 21, 2009, Liverpool and Arsenal treated us to one of the most entertaining games in Premier League history at Anfield.

Liverpool, battling Manchester United for the Premier League title, needed a win to go above their fierce rivals, while Arsenal were down in fourth, with a comfortable seven-point cushion above Aston Villa behind them.

The 2008-09 campaign was Liverpool at their best under Rafa Benitez. Steven Gerrard and Fernando Torres’ telepathic understanding was at its most frightening, while a central block of Jamie Carragher, Daniel Agger, Javier Mascherano and Xabi Alonso possessed both grace and guile.

However, the hosts were without Gerrard due to injury, meaning Albert Riera came into the side, while Arsenal had Robin van Persie unavailable. Lukasz Fabianski, Mikael Silvestre, Denilson and Nicklas Bendtner all started for the Gunners.

The clash was a perfect amalgamation of the best of the late-2000s Premier League: pace, intensity, blood and thunder, but also a number of the best players in the world.

Cesc Fabregas, firmly established as Arsenal’s talisman at only 21 years of age, robs Mascherano, but then look at what happens next. Compare the movement of the Gunners’ attackers to the bewilderment of the Liverpool defence, who largely remain static.

Arshavin puts the ball into the back of the net – and we’ll be hearing plenty more of that later.

Dirk Kuyt, there, toiling away on the wing and provoking a response by sheer force of will.

But this goal belongs to Torres and his majesty as one of the best strikers in the world, making the header look like the simplest of tasks.

Yossi Benayoun hurdles over Fabianski to retrieve the ball – there are still 40 minutes left, but it’s as if he knows what’s about to follow is going to be special.

Arsenal are pissing around at the back again and panic before gifting the ball to Kuyt, who shows why he was the best workhorse in the league with a sumptuous cross to the back post, where Benayoun defies his brittle frame and Bacary Sagna’s boot to force the ball over the line at the Kop end.

It’s going to be good, this.

Realising this is a game for pace and thrust rather than, well…Denilson, Wenger sends on Theo Walcott, and two minutes later Arsenal are level.

It’s not a game defenders will look back on fondly, as Alvaro Arbeloa loses the ball on the edge of the box, but Arshavin will never play this well again, and he lashes it past Reina.

It’s pointless try to contain madness, and both sides have now fully committed to embracing it.

Fabio Aurelio is looking at the floor, Carragher is sat down shaking his head, Arshavin is shrugging his shoulders. Nobody can understand what is going on, how this has happened or how it’s going to end.

Yet again another defensive miscue presents the ball to the Russian, who quickly slams it through Pepe Reina before taking a second to start celebrating.

Anfield erupts. In the last four years Liverpool fans had witnessed the comeback against AC Milan in Istanbul and the FA Cup final heroics against West Ham, and for sheer bedlam this is right up there.

It’s Torres. Of course it’s Torres. Of the great goalscorers to have graced the Red shirt, peak-Torres was as good as any of them.

Fabianski gets a hand to it, but the brilliance is in the way the Spaniard toys with Silvestre before pulling the trigger.

Kuyt sprints to get the ball back. The most reliable man in the world.

The fact the commentator just decides to scream “FOURRRRR!” at the sight of this goal perfectly sums up this game.

Walcott sprints away after a Liverpool corner is cleared – in uncannily similar circumstances to the Champions League quarter-final of the previous year – and Arshavin shows remarkable energy to offer support.

Faced with the Russian, Reina suddenly looks like the loneliest man in the world. He’s utterly helpless as the ball gets lashed past him. A ridiculous finish in a ridiculous match.

That’s got to be the game, right?

That’s not the game. What game were we even playing? Football? Oh, right. But it’s 4-4. That’s rugby league, isn’t it?

There’s remarkably little made about Benayoun’s goal from either side. It’s hectic. It’s shambolic. It’s ridiculous. It’s not even unexpected any more.

Anyway, you know what happened next. Liverpool didn’t win the league and Arsenal finished fourth. But football isn’t always about results. It’s about being made to feel thrilled and exhilarated and disappointed and exhausted all at once.

There have been few greater examples than Anfield on April 21, 2009.