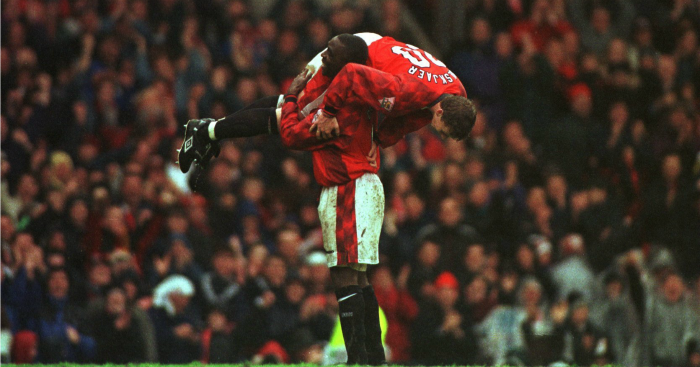 On May 5, 1997, Manchester United and Middlesbrough played out a thrilling 3-3 draw at Old Trafford which left neither team satisfied but still lives in the memory today.

Both teams needed the points for vastly contrasting reasons. United were looking to defend their title, kicking off this game in hand three points ahead of second-placed Liverpool, while Boro were languishing in 19th place, trailing Sunderland in 17th place, but with this and one more game in hand.

A chaotic season was drawing to a close for Boro, who had perhaps provided the blueprint for Real Madrid’s ‘Zidanes and Pavones’ concept with their ‘Ravenellis and Stamps’ approach. It was a philosophy that was failing.

They were beaten finalists in the League Cup and had an FA Cup final against Chelsea on the horizon that they would also lose.

But more pressing was the relegation dog fight, during which Boro had severely handicapped themselves by failing to fulfil a fixture at Blackburn Rovers.

The club felt unable to field a senior team for the December fixture due to an injury and illness crisis that ruled out 23 players, but the Premier League ruled Boro had broken the rules by postponing the match. They were docked three points and told to play the game, three days after their trip to Old Trafford.

Without being docked those points, Boro would have arrived in Manchester outside the bottom three. But their performance, certainly in the first half, belied their troubles…

Boro stunned Old Trafford, not only by taking the lead but with the outstanding quality of the Juninho’s 15th-minute opener.

After Ravenelli had already hit the post, the little Brazilian rounded off a sweeping Boro team move that involved at least half of the side. Overlaps, wall passes, cross-overs and one-twos in the United half resulted in Craig Hignett feeding Juninho, who side-footed past Peter Schmeichel into the far corner. Just like watching Brazil.

It was typical of Juninho’s performance on the day and his efforts during the second half of a wretched season for Boro. He was pipped to the Player of the Year award by Gianfranco Zola and at times looked to be carrying his team upon his frail-looking shoulders.

Sir Alex Ferguson, or just plain Alex Ferguson as he was still called, labelled Juninho, “the best player I’ve seen in the Premier League this season”.

United were labouring, and having drawn their previous match at Leicester, it seemed like it could be another one of those afternoons.

Boro centre-halves Nigel Pearson and Gianluca Festa were repelling everything being thrown at them, until Festa’s first lapse 11 minutes before the break. Ole Gunnar Solskjaer rolled the ball into Andy Cole, who felt Festa trying to steal in and promptly rolled the Italian.

Festa recovered to make a block but the rebound sparked a race to the loose ball between Emerson and Roy Keane. We don’t need to tell you who won…

Reeling not only from being pegged back, Boro also had to contend with the blow of losing Ravenelli to a hamstring injury.

It would be the Italian’s final league match for Boro. Though he was able to return to the starting line-up for the FA Cup final, he lasted only 24 minutes.

But the former Juventus star’s replacement at Old Trafford, Chris Freestone, a former painter and decorator signed from Arnold Town, made an immediate impact.

Juninho once again stepped away from Gary Neville before clipping a pass into Freestone on the edge of the box. The Boro sub was quicker than Gary Pallister, laying the ball into the path of Emerson, who rammed it home via the underside of the bar.

It’s hard to tell whether Emerson’s celebration was a Brazilian samba, or his own nod to the Madchester movement. Either way, he was off his nut, but things were about to get even more twisted for Boro…

United looked somewhat punch drunk and Boro sensed the opportunity for a potential knockout blow. Phil Stamp launched a counter-attack, leaving Denis Irwin on his backside before driving forward and retaining the ball for nigh on 10 seconds.

Looking utterly lost and somewhat bemused at United’s apparent lack of concern, Stamp eventually bounced the ball off Freestone before a United body recognised the need for urgency. Hardly surprisingly, that was Keane, who slid in to deny Stamp a path towards the penalty area.

No matter, Stamp simply turned to retrieve the loose ball and play a reverse pass into Robbie Mustoe, who burst beyond Keane to stand up a cross towards the far post. Gary Neville, like most of his team-mates, had switched off, allowing Craig Hignett a free header from three yards.

“Alex Ferguson, his face like a mask,” said John Motson as the camera panned to the bench. A Scream one, possibly, given the movie had just enjoyed its UK release that weekend.

All they had to do was see out the first half and get in at the break with their two-goal advantage intact. But this Boro side had become accustomed to making life hard for themselves.

To be fair, the visitors’ defence was compact and narrow to deal with the three-pronged threat of Eric Cantona, Solskjaer and Cole.

Gary Neville’s presence in the box was not seen as concerning enough to bother marking him which, given the United full-back had yet to score a senior goal, was perhaps a forgiveable conclusion.

But Neville showed the composure and ruthlessness of a 20-goal striker, arcing his run on to Cantona’s reverse pass to get his hips in line with Roberts’ far side netting, before unleashing a rasping drive in that exact direction.

“Yes! F***ing come on!” screeched Neville, as Boro’s half-time break become a lot less comfortable than it might have been.

What followed was more predictable than the Manchester bank holiday rain. No doubt after Ferguson’s hair-dryer had been plugged in at half-time and turned up to ‘hotter than the sun’, United laid siege to the Boro goal.

That was until Neville once again made the difference in attack. The right-back sneaked forward into space vacated by David Beckham, with the No.10 turning and feeding his best mate.

With Ronnie Johnsen’s run distracting Blackmore, Neville drove forward before landing a Beckham-esque cross between the Boro centre-halves. Solskjaer had slipped their attention and with a twist of his neck, United were level.

With Paul Scholes dispatched from the bench, United had a quarter of the match left to find a winner, and God knows they tried.

But Boro showed the type of determination they had lacked too often that season and restricted United only to half chances. They held on for what could have been a precious point, but as it turns out, their failure to cling on to all three cost them a Premier League place.

Draws in the rearranged game at Blackburn and on the final day at Leeds United saw to it that Boro were relegated, with Juninho’s tears on the Elland Road pitch becoming one of the defining images of their season.

They lost the Brazilian to Atletico Madrid, and the FA Cup final too, where they gave Chelsea a 1-0 head start when Roberto Di Matteo scored after 42 seconds.

For United, the draw was not to damage their title bid. Indeed, they were handed the title the following day when Liverpool lost at Wimbledon and Newcastle were held at West Ham.

Lifting the trophy six days later was to be the final act of Eric Cantona’s United career.