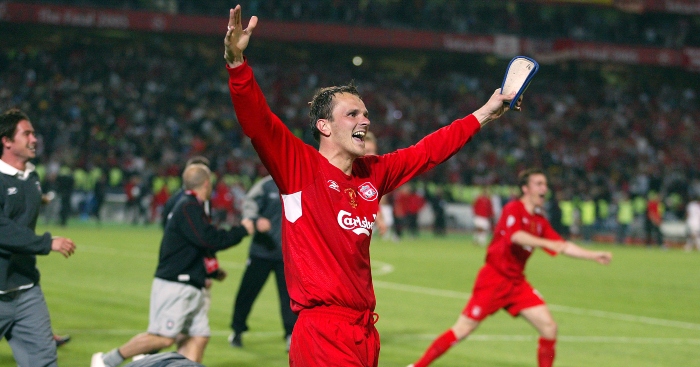 Steven Gerrard, Xabi Alonso, Fabinho, Georginio Wijnaldum, the list could go on – Liverpool have rarely been starved of high-quality footballers in the engine room over the past two decades.

While he is not quite as heralded as some of those, Didi Hamann’s achievements with Liverpool should not be overlooked: 283 appearances, nine winners’ medals.

As scorer of the last ever goal at the old Wembley, catching out David Seaman with a quickly taken free-kick in a World Cup qualifier, Hamann may not have been the most popular with everyone in England. But to this day he remains a hero among Liverpool fans.

Hamann was a classic defensive midfielder, undertaking the dirty work that allowed the more creative players in front of him to thrive. He was one whose business would often go unnoticed, quietly performing his role to perfection while the others around him took the plaudits.

But this wasn’t to say that Hamann wasn’t capable of producing magic moments of his own. His ball-striking ability was second to none and contributed to some of the fiercest goals Liverpool fans have seen in recent times.

Hamann only scored 11 goals across his seven years at the club, but when he did score, it was often special.

Take this rocket of a free-kick against Fulham in 2002, for example.

Edwin van der Sar, no less, was in goal, but the Dutchman barely had chance to lay eyes on the strike let alone save it.

Indeed, when Hamann hammered in a volley against Portsmouth a couple of years later, Shaka Hislop didn’t even bother trying.

You got the feeling Hamann could have scored dozens more like this if he fancied it; he was just too busy stopping everyone else from scoring. And he was bloody good at it.

Istanbul 2005 will go down as one of the most incredible nights in Liverpool’s illustrious history, but the miraculous comeback may never have happened without the influence of Hamann.

Having only been named as a substitute for the fixture, Liverpool found themselves all but out of the final at half-time, trailing 3-0 to a Milan masterclass.

Hamann could have counted himself unlucky not to have started the match after playing in the semi-final and a number of Premier League games since returning from injury, and he replaced Steve Finnan at half-time as Benitez moved to three at the back, pushing Steven Gerrard up the pitch and leaving Didi to sit alongside Xabi Alonso.

What followed, of course, will go down in history as Liverpool produced the most unlikely of comebacks, with Hamann having a huge impact on the game.

With a record from the spot of two misses from two in his career prior to this night, being tasked with taking Liverpool’s first penalty of the shootout was maybe not what Hamann envisaged, but he kept his cool to slot past Dida into the left-hand corner. With a fractured foot, it later emerged.

Two Jerzy Dudek saves later, Liverpool completed their miracle. There were many Liverpool heroes that night, but Hamann’s introduction at half-time was the catalyst for an unthinkable turnaround and a night Reds fans will never forget.

As disappointed as Liverpool fans were to lose their favourite German, it was somewhat fitting that Hamann’s final appearance in a Red shirt in 2006 saw him lift the FA Cup after an individual performance almost identical to that which he produced in Istanbul.

This time he was introduced as a second-half substitute with Liverpool staring down the barrel of a huge upset at the hands of West Ham.

The game will be remembered for Steven Gerrard’s heroics, but Hamann again changed the tone of the game and again stepped up to the spot to score his penalty in another victorious shootout. 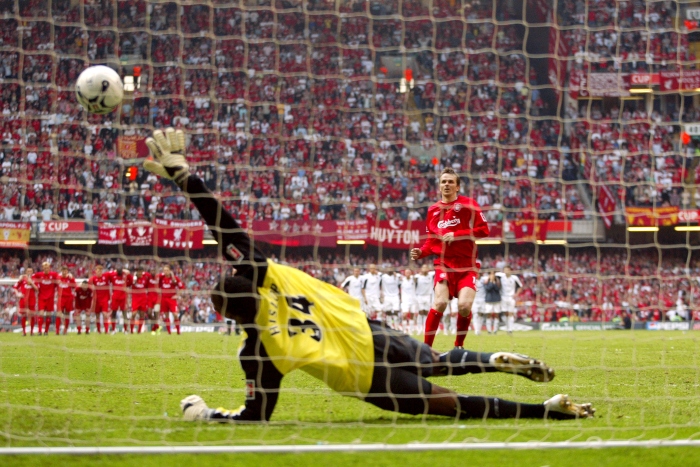 Hamann was a player who forever kept his cool in situations of importance, a calming influence over the rest of his team-mates, spurring them on over the line in situations that appeared unrecoverable.

Even at times when his Liverpool career looked to be over, Hamann continually put in performances of the highest order, always giving his all for the club he had fallen in love with.

Such was Hamann’s impact during his time with the Reds that the likes of Jamie Carragher, Michael Owen and Gerrard all spoke of the influence that he had on their careers.

“He allowed me to go forward, score and set up goals, and he did all my defensive work and tackling for me,” Gerrard said. “At the time we had him, he was in his prime and he was up there with the best holding midfielders in the world.”

Hamann embraced the people and the culture that he was surrounded with, whether it be taking up an interest in horse racing with Owen, or watching cricket for the first time. As a result, the supporters fell in love with him, and he fell in love with them.

Since retirement, Hamann has said it is his “dream” to manage the Reds. Liverpool are currently on the verge of tasting their first Premier League title under their new German hero, but maybe one day a former one will return to add to the cabinet.