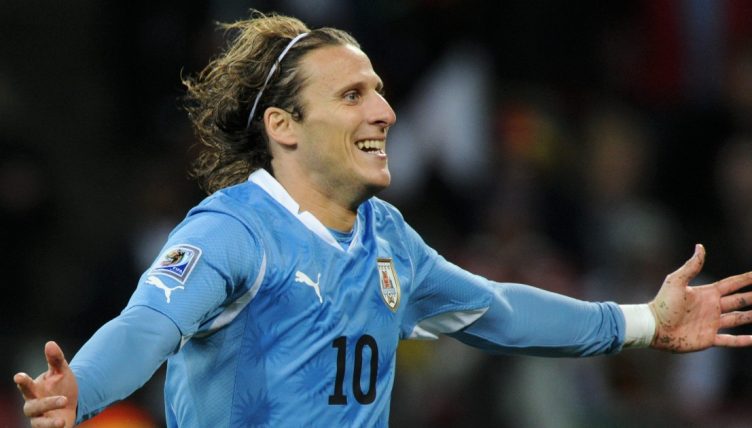 From Luis Suarez to Ruud van Nistelrooy, Diego Forlan played alongside some great strikers in his career. But his greatest partner in crime was the Jabulani.

As the connoisseurs will already know, Jabulani isn’t the name of one of Forlan’s former team-mates but the official ball used at the 2010 World Cup in South Africa.

Adidas gave it the full marketing spiel: the ball was made with eight bonded panels, supposedly giving it a perfect spherical shape.

But it soon became clear that Adidas had made a total balls-up and the players in South Africa knew that something was off.

“The football is horrible,” goalkeeper Julio Cesar said after testing it in Brazil’s training camp. “It is like one of those you buy in the supermarket.”

Even Italy goalkeeper Gianluigi Buffon, usually so mild-mannered, poured scorn on the Jabulani: “The new model is absolutely inadequate and I believe it is shameful to play such an important competition, where so many champions are taking part, with a ball like that.”

While goalkeepers were very critical in their assessment of the Jabulani, they were by no means the only players who felt that way.

“It’s very weird,” Brazil striker Luis Fabiano said. “All of a sudden it changes trajectory on you. It’s like it doesn’t want to be kicked. It’s incredible, it’s like someone is guiding it. You are going to kick it and it moves out of the way. I think it’s supernatural, it’s very bad.”

Craig Johnston, the former Liverpool midfielder and designer of the Adidas Predator ball, was particularly aggrieved.

“Whoever is responsible for this should be taken out and shot for crimes against football,” he wrote in a very strongly worded letter to FIFA. Bit much, Craig.

Alongside the maddening drone of vuvuzelas, the Jabulani ball quickly became one of the biggest talking points of the 2010 World Cup. Players from all over the world were increasingly frustrated as their passes went astray and their free kicks disappeared into Row Z. 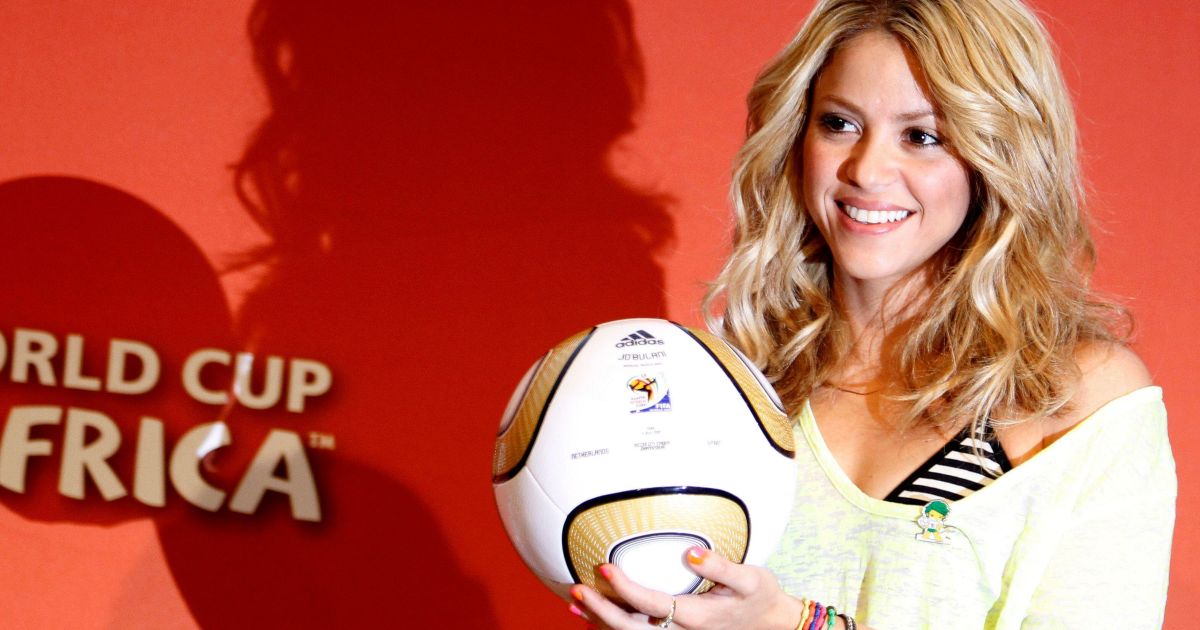 READ: A definitive ranking of every World Cup ball since 1966: Jabulani, Tango…

But there was one exception.

While most players were busy throwing their toys out of the pram and complaining in the media, Forlan was relaxing at Uruguay’s base camp as he was one step ahead of everybody else.

The striker, who scored 28 goals in all competitions for Atletico Madrid in 2009-10, was looking to put on a show at the 2010 World Cup after Uruguay failed to qualify for the tournament in Germany four years earlier.

He quickly realised that the Jabulani ball would cause problems and made some meticulous preparations ahead of the tournament in South Africa.

“Three months before the 2010 World Cup, Diego Forlan asked Adidas to send him a Jabulani ball,” former team-mate Sebastian Abreu said. “At Atletico Madrid he stayed after the training, practicing moves with the ball in motion and free-kicks.”

Forlan spent months taming and mastering the Jabulani, working tirelessly until he was able to bring the infamous ball under his spell.

There are reports that he even draw a face on a Jabulani ball and called it Wilson but they are yet to be confirmed.

After South Africa kicked off the World Cup with a 1-1 draw with Mexico, Uruguay then faced France in the second game of the tournament. The two sides failed to entertain the fans in Cape Town and played out a goalless draw.

But the game was briefly illuminated by the occasional moment of magic from Forlan, who forced an excellent first-half save from Hugo Lloris after cutting inside and shooting from 20 yards.

The striker, playing in a role just behind Suarez and Edinson Cavani, then took things up another level against hosts South Africa. After he picked up the ball 35 yards out, the defenders foolishly decided to back off and Forlan’s eyes lit up.

Uruguay’s No.10 unleashed a ferocious strike that flew over goalkeeper Itumeleng Khune before dipping into the net at the very last moment.

The goal brought the incessant sound of the vuvuzelas to a stop. There was instead a deafening hush around the boisterous Nelson Mandela Bay Stadium while Forlan celebrated with his team-mates.

Morning all. Hope your day is as good, if not better than, this stupendous Diego Forlán goal at the 2010 World Cup.

Diego × Jabulani = a match made in heaven 😍pic.twitter.com/wKhXlXEMf5

There was a hint of fortune about it as the ball found the net via a glancing deflection off defender Aaron Mokoena, who unsurprisingly doesn’t want to take any credit for the goal.

“That Forlan goal was just something special,” Mokoena told New Frame in 2020. “He simply got the technique of kicking that ball right and that is why it beat both myself and Itu [Khune].

“I was trying to close him down but he took the shot. He was very far from the goals and I didn’t think he would shoot.”

Khune was sent off in the second half after being adjudged to have fouled Suarez inside the penalty area. Forlan then stepped up and emphatically fired his penalty into the roof of the net, doubling Uruguay’s lead.

Suarez took centre stage in their next two games, scoring the winner against Mexico in their final group game before netting a brace against South Korea in the last 16. But Forlan wasn’t going to wait in the shadows for long.

Uruguay came up against Ghana in the quarter-finals but found themselves 1-0 down after Sulley Muntari struck a long-range opener on the stroke of half-time.

Despite never scoring with a free-kick for Manchester United, Villarreal or Atletico, Forlan decided to try his luck in the 55th minute. After all, the Jabulani was Forlan’s version of the Super Soldier serum.

The speed of the shot saw the ball move in the air, bamboozling Ghana goalkeeper Richard Kingson, and it ended up in the back of the net.

Just loved the Jabulani, that lad.

Admittedly, it might not have gone in with a Mitre Tactic but Forlan adapted to the situation and used the tools at his disposal.

The game went to extra-time and the rest, as they say, is history. Suarez broke Ghana’s hearts with an iconic piece of shithousery and Uruguay won on penalties, reaching the World Cup semi-finals for the first time since 1970.

Forlan was then introduced to a rival for his Jabulani crown when Giovanni van Bronckhorst gave the Netherlands the lead with a sensational strike at the Cape Town stadium.

But, refusing to be outdone by his opponent, Uruguay’s No.10 shifted the ball onto his weaker left foot before unleashing a strike that swerved in the air and hit the back of the net after stinging the fingers of Maarten Stekelenburg.

Despite Forlan’s individual brilliance, Uruguay’s World Cup dream was left in ruins after quickfire goals from Wesley Sneijder and Arjen Robben. It was then time for the match no nation wants to play, the third-place play-off.

While most players just want to leave and go back home at this point, Forlan still had one last moment of magic up his sleeve.

After Germany’s Thomas Muller and Uruguay’s Cavani both scored in the first half, he produced an acrobatic half-volley that bounced past a helpless Hans-Jorg Butt.

The striker had seemingly been running his own Goal of the Tournament competition and this strike was officially voted the 2010 World Cup’s finest.

People started to believe that Forlan had Jabulani cheat codes or that someone was controlling the ball remotely, but he later revealed the secret to his success.

“I got lucky and [the Jabulani] behaved very well back then. And we got along great.”

While Uruguay ultimately lost 3-2 to Germany, Forlan’s perfomances in South Africa saw him win the Golden Ball, the Golden Boot and the Goal of the Tournament award.

After being dubbed ‘Forlorn’ during his spell in England, the striker managed to shake off his tag as a United flop and star on the biggest stage in world football.

But even Forlan will recognise that it may not have been possible without his partner in crime: the Jabulani.

READ NEXT: How Diego Forlan fought to become a Manchester United cult hero