Simeone vs Guardiola & a nutmeg so perfect he applauded himself 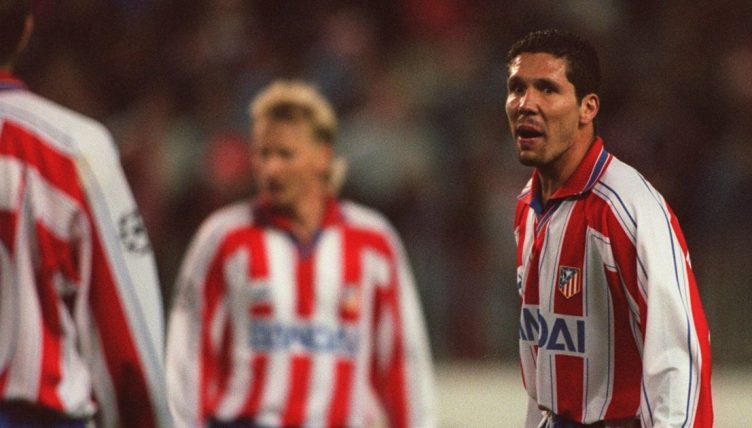 Both midfielders, whereas Guardiola was shaped as a player by the grandiosity of Johan Cruyff and Barcelona, Simeone described his own playing style as that of a man “holding a knife between his teeth”.

Guardiola sought out Marcelo Bielsa’s advice and was inspired to gift the world tika-taka. Simeone played under Bielsa for Argentina and was instead inspired to create Cholismo, a philosophy that prefers destruction to art – “the exact opposite ideas of mine,” as Bielsa himself put it in 2019.

That does not mean beauty can only be found in one and not the other. The implausibility of Simeone’s Atletico Madrid punching up at Barcelona and Real Madrid and succeeding – at least in the case of their 2013-14 title – can be just as seductive as any Messi masterpiece.

It was a similar story for Simeone the player. In 1995-96 he was part of the Atleti side crowned champions of Spain, playing opposite Guardiola in midfield as they also claimed the Copa del Rey by beating Barcelona in the final.

Imagining their battles on the pitch is likely to provoke a similar picture in most minds: Pep gliding across the pitch, carefully caressing the ball at his feet; Simeone snapping at ankles, knife between his teeth.

But neither men are completely comfortable with their respective stereotypes. Sometimes football’s yin got a glimpse of football’s yang and may have been surprised to see this:

Perhaps this was the precise moment that sparked epiphanies in both players.

Guardiola may not have suffered the ignominy of listening to Simeone applaud himself while the ball was rolled between his legs, that fate befell to captain Jose Bakero, but it remains an invaluable lesson: the team in possession is the team more likely to prompt embarrassment.

For Simeone, so unsteady in his Copa Mundials he looks like he might roll his ankle any second, it was vindication for his skullduggery.

Punching up may be difficult, but it’s not impossible. The blade can sometimes stay between the teeth. In destruction, there can also be art.

This article was originally published in July 2020.