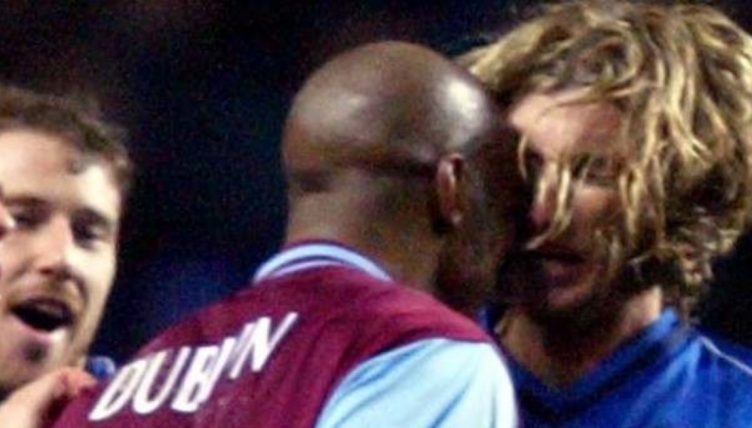 Everybody has their breaking point – whether it’s a dirty plate in the sink or a cheating spouse – but we all experience them in distinct ways.

Some people ignore the symptoms, letting stress build up until, all of a sudden, they explode. Many of these individuals overreact to situations that might feel normal to anyone else. Think Roy Keane ranting about sock tape on Super Sunday.

Other people resist being under pressure, and they immediately turn off. These individuals are so laid-back they spend their entire lives horizontal, shrugging off slights with a smile and a booming laugh.

Dion Dublin lies firmly in the latter category. Whether he’s speaking about football or investigating stairs going up to the bedrooms, the former Manchester United and Aston Villa striker is universally regarded as an absolute gentleman.

But everybody has their breaking point and Dublin’s came during a Second City derby in 2003. The results were spectacular…

In their infinite wisdom, West Midlands Police decided to stage the first top-flight match between Aston Villa and Birmingham City at Villa Park for over 16 years on a Monday night, allowing fans to load up on lager before kick-off.

And, judging by the tackles flying in from both sides, the players themselves had enjoyed a pre-match banquet of Red Bull and smarties.

A fractious game boiled over after the interval when Dublin saw Robbie Savage dawdling in possession and sensed an opportunity for footballing immortality.

Charitably described as a “late challenge” in the BBC match report, the striker scythed down Savage with a tackle that’d carry a prison sentence in much of the world.

“The challenge itself was a red,” the former Birmingham midfielder told Open Goal. “I was quite clever, I saw him coming. I knew he was gonna launch in. If my legs were planted, I’d be in serious trouble.”

Dublin, unsurprisingly, saw things differently. “I was about three seconds late,” he said in 2019. “I wasn’t just a bit late. It was a rubbish tackle. I was bang out of order and I ­deserved a yellow card. It was absolutely my fault.

“But there was no contact at all. Robbie saw me coming and leapt into the air – he was ­almost in orbit he was that high off the ground!”

The limb carcass on the Villa Park turf miraculously recovered to square up to Dublin and massage his wounded male ego. The Aston Villa forward read the room and professed his views in a polite and civilised manner.

Referee Mark Halsey, his authority slipping by the second, battled to keep the warring factions apart. It’s impossible to know what Halsey was thinking but his body language suggests a man counting down the seconds until his personal ordeal was over.

But, in a move that flummoxed Premier League defenders down the years, Dublin gave him the slip and advanced towards Savage. Like a puppy on a cliff edge, the Welshman continued yapping away with no sense of the impending danger.

There’s something about an unflappable individual losing their rag that’s strangely compelling; the rarity of the event adds to its unpredictable nature.

And nobody quite expected Dublin to march up to Savage and headbutt him within a foot of the referee. This was no gentle nudge either; Dublin planted his head straight into his opponent with real relish.

Without wishing to condone on-field thuggery, the excellent technique and recipient of the headbutt almost renders this a victimless crime.

Judging by the image at the top of this page, Savage’s team-mates certainly seemed to think so too…

With Savage clutching his nose, and the simmering on-field tension having truly boiled over, Halsey was left scrambling for tea towels in an attempt to mop up the mess.

After telling the players to do one, aided by a linesman in nosebleed territory, Halsey sent Dublin from the field by holding an achingly cool circular red card aloft.

The striker looked incredulous and, summoning the righteousness only accessible to the truly guilty, attempted to bargain his way out of a punishment even Vinnie Jones would’ve felt was merited.

Not that his dismissal diffused matters. As the Villa man began the trudge towards the dressing room, Savage couldn’t resist sticking the metaphorical boot into his adversary with a few verbals.

Unable to resist the bait, Dublin responded but was prevented from a repeat of his WWE antics by a dozen or so conciliatory bodies.

The whole scene oozed with the energy of Saturday night on Broad Street and Dublin was escorted away by a member of Villa’s coaching staff.

Savage was later substituted, probably for his own safety, and Birmingham secured a 2-0 victory at the home of their arch-rivals. Villa supporters responded by charging the away end and the match and its aftermath were soundtracked by the constant drone of police helicopters.

“What was said is irrelevant. My actions were wrong. It was the wrong reaction,” said Dublin within 24 hours of the incident, whilst also denying that there was any racist language from Savage.

“I called a meeting of my team-mates this morning and said sorry to them. I wanted to say sorry to their faces.

Even a mild-mannered Dublin had his breaking point; Robbie Savage, a Second City derby and one of the most gloriously executed headbutts ever seen on British soil.