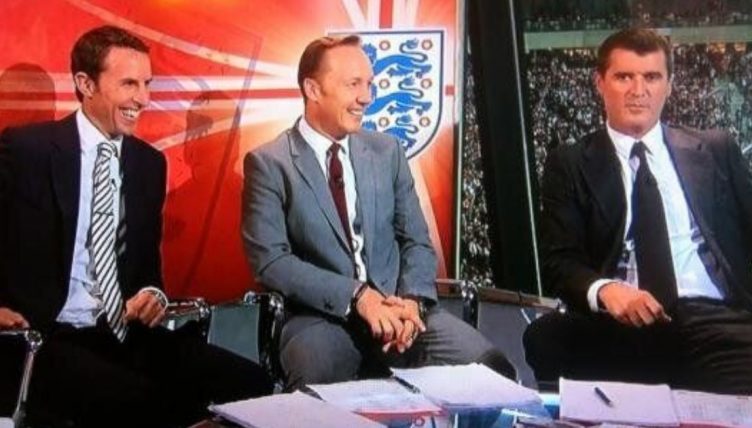 Like driving a bus or working on the door of a nightclub, football punditry is a harder gig than is commonly assumed.

Think about it. You have to be respected enough to be invited to give your opinions in the first place. It’s the reason why Alan Shearer appears on Match of the Day and not the bore from your local pub who reckons Gareth Southgate should simply tell his players to play Total Football.

You need to be articulate, form coherent sentences on your feet and appear jovial, all in the knowledge you’re being watched by millions and any mistake will lept upon by the hyenas of social media. It’s always been much easier to criticise than participate.

And punditry roles don’t come much harder than England’s trip to Poland in October 2012.

As ITV prepared to cover the World Cup qualifier, a rainstorm of biblical proportions descended upon Warsaw.

After hours of deliberation, the match was eventually postponed, but not before Adrian Chiles had fronted a masterclass of banal banter that broke the spirits of both Gabriel Clarke and Roy Keane.

There was no action, but it was still the most entertaining football coverage we’d seen for years.

Despite a forecast of heavy rain, the Polish FA decided against closing the stadium roof before the game. With pinpoint predictability, conditions on matchday would have made Noah think twice about stepping outside.

As Chiles, heading a line-up of Keane, Southgate and Lee Dixon, pondered why nobody was endeavouring to protect the pitch, Clarke was dispatched to the bowels of the stadium in search of some answers.

It was a thankless task. The ITV pitchside reporter, renowned for his excellence, was wading through floodwater while Chiles and co chortled from the warmth of their studio.

Eventually, Clarke tracked down Agnieszka Olejkowska, tentatively introduced as the Polish media officer. She declared it would be impossible to close the roof while it was raining for safety reasons.

In scenes reminiscent of Bart Simpson detecting the exact moment Lisa broke Ralph Wiggum’s heart, Clarke could be seen having a sense of humour failure on live TV.

As Chiles baited him with questions – “What’s going on Gabriel?… Don’t hurry, we have plenty of time!” – poor Clarke took his frustrations out on the nearest Pole.

“It’s a farce, isn’t it? Why wasn’t the roof shut?” Clarke barked at a gentleman who just happened to be wandering past. The fear-gripped official answered with a shrug as he dashed towards the nearest exit.

By the time the match was called off, Clarke wore the forced smile of Meghan Markle humouring Piers Morgan.

But this was nothing compared to the plight of Roy Keane upstairs.

Panicking at the thought of filling so much airtime with so little football, Chiles was desperately trying to find a conversational hook on which to hang his metaphorical hat.

This explains why the two pitch inspections were dissected with the depth usually resolved for tackling the world’s irrigation crisis.

Keane, not exactly known for his ability to empathise, was slowly losing the will to live – a situation that wasn’t helped by Chiles attempting to persuade him to go and inspect the pitch himself.

Upon being asked, Keane wore the expression of a man who would force-feed Chiles a pitchfork if he continued that particular line of questioning.

As the Italian referee Gianluca Rocchi arrived for the second time to determine whether more rainfall had improved the pitch, Keane scolded him for being late.

He didn’t stop there. Every time Rocchi threw the ball, it splatted into a puddle before stopping dead. “The referee’s a clown,” Keane barked, wearing his irritations on his sleeve.

Among all the fun and games, he didn’t forget his Manchester United allegiances. Taking the opportunity presented by the extended airtime, the Irishman proceeded to tear into the confidence of England goalkeeper Joe Hart, simply because he had nothing better to do.

“There’s a fine line between confident and cocky,” he murmured, “and he’s been a little bit too cocky this year for me.”

Attempts to talk about literally anything else were rebutted, as Keane went deliciously off-piste to deliver his personal vendetta. The best interrogator the CIA never had.

But one moment, gloriously preserved on social media, summarised Keane’s torture above all others.

The much-maligned Chiles, seemingly reading from an A-level philosophy textbook, questioned at exactly what point heavy rain becomes a downpour.

Enough was enough for Roy. Not even attempting to hide his utter disdain for humanity, the Hercules of punditry managed to shake his head, roll his eyes and wear an incredulous smile all at once.

As Southgate and Dixon filled the studio with their laughter, Keane pinched the bridge of his nose and started counting down the seconds until his personal hell was over.

The match, eventually replayed the next day, ended up as a forgettable 1-1 stalemate. The Polish FA, determined not to take any chances, closed the stadium roof despite the sunny weather outside.

But that shouldn’t detract from a glorious night of punditry in the ITV studio. It was as if the producers had bottled the feeling of being on a dysfunctional family holiday at a caravan park and delivered it to the watching masses.

And if Chiles was faced with an impossible job, spare a thought for Clarke. And Keane.

TRY A QUIZ: Can you name every player Ferguson used in his last Man Utd season?