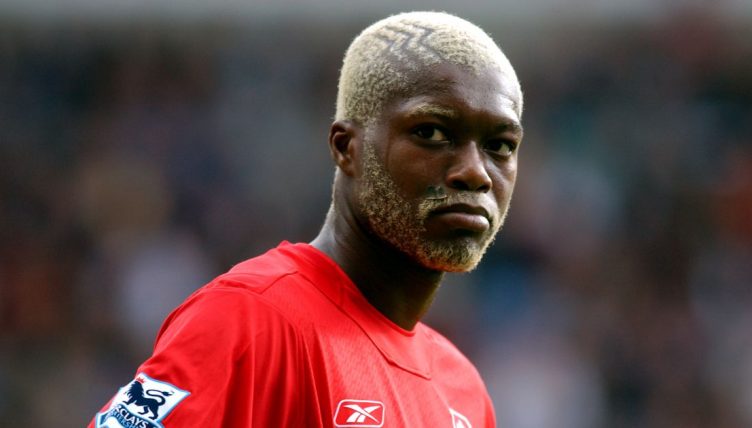 We’ve now got used to Football Manager phenoms struggling to translate that into real-life success, but Djibril Cisse would have bucked the trend were it not for injuries.

Indeed, when Cisse joined Liverpool in 2004, many football fans had been keeping an eye on him for a long time. The French striker was a star of football management games around the turn of the century, but unlike many others, he’d already delivered on that simulated promise.

If it wasn’t for a very unfortunately timed injury at Anfield, he might well have stayed at the very top.

The Cisse we saw breaking through at Auxerre was pure excitement: that flash of bleach-blond hair felt like a cry of “look at me”, and once all eyes were on him he delivered. It was like watching a child calling out for his parents’ attention before jumping into the deep end and then nailing a triple somersault with a perfect landing.

When you saw Cisse through on goal, you expected him to convert the chance, and to do so before the goalkeeper even had time to accept the inevitable. The ball would always stick. The shot would always end up exactly where he wanted. The result would always be the same.

The clinical manner in which he put away those chances wasn’t at the expense of the occasional more extravagant finish, though, and like any top striker he had a knack for finding space where there really wasn’t any.

During a game against Paris Saint-Germain in the 2001-02 season, for example, Cisse drifted – seemingly aimlessly, as Teemu Tainio meandered down the left and set up an attack. It took several more phases for the ball to reach him, by which time there were more than 10 other players in the PSG box. Essentially, it shouldn’t have been possible for him to do anything like this.

After scoring nearly 100 goals before the age of 23, Cisse’s move to Liverpool was greeted with a hefty dose of excitement.

He had been targeted by Gerard Houllier and still made the move after the French coach was replaced by Rafa Benitez. Sometimes a change like that can get in the way of a player’s progress, but injury struck before he even had a chance to sink or swim.

That broken leg, suffered in a freak incident against Blackburn, left a big gap in the middle of his first season – albeit one made less terminal by a goal in that penalty shootout in Istanbul after arriving as a late substitute. Then, seeing his second season as a chance to make up for lost time, he began the campaign on fire with four goals in five Champions League qualifiers.

Cisse’s biggest goal that season, however, came right at the end of the campaign, helping Liverpool back into the FA Cup final against West Ham.

The goal showed his smart movement and ability to drift away from defenders the instant they looked away. To do that alone requires the brain to tick over at millions of miles per hour, but to keep the calmness to connect acrobatically with Shaka Hislop closing requires countless over-rotations of the mind over and above that. And even then, the actual execution is no gimme.

If he’d hoped that would be the start of something, though, fate intervened once more. Another broken leg kept him out of a World Cup, where he could easily have made the difference for France in their final defeat, and forced him to wait on the sidelines after a summer move on loan to Marseille.

Some players in his situation might have been disheartened, taking the repeated setbacks as a personal affront, but Cisse never lost the ability – and, more importantly, the belief – to keep doing what he had always done better than most.

Perhaps this came from the Frenchman’s ability to compartmentalise what others might have otherwise considered off-field distractions, developing a flamboyant persona and even becoming the Lord of the Manor of Frodsham after buying a property in the Cheshire town while at Anfield.

If the conversations about other aspects of his life could have their own place, he could let people talk in the background and continue to focus on his own expertise on the pitch. Cisse the character and Cisse the footballer could be different because he had the mindset to separate them.

As he told The Guardian in 2008: “People get mixed up sometimes. They see my tattoos, my cars, my dress sense. They think my first love is fashion. But football is my number one. Yes, I like clothes and flashy things, but I know why I have all these clothes: football.”

This is what allowed him to produce the most productive goalscoring run of his career – 55 goals in just two season  – with Panathinaikos before a fantastic late-career cameo with QPR in 2012.

That stint in west London began in bizarre fashion: Cisse played eight times in the 2011-12 season after joining in January, and in each one of them he either scored or was sent off – no middle ground.

It showed the all-or-nothing focus of the Frenchman: he was rarely one to hold anything back on the pitch, pushing every conceivable limit from the offside line to the gap between striker and goalkeeper to the limits of his own body.

He hadn’t lost the movement, and nor had he lost the speed of thought: each one of those six goals were first-time finishes, culminating in the goal-from-nothing which briefly threatened to spoil Manchester City’s title party.

As the main man for a dominant club, you’ll often get time to set yourself before finishing, but every chance that falls your way for a relegation battler might be your last. To recognise this, while still rediscovering that finishing touch after a barren few months at Lazio, was nothing short of phenomenal.

When Cisse finally opted to hang up his boots, it came as a surprise – not because he hadn’t had a long and productive career, but because it felt as though he’d have been able to keep playing forever if he wanted.

Maybe it was the haircuts, the poor timing at international level or simply the failure to keep the Football Manager dream alive forever, but it feels as though he never quite earned the reputation his ability deserved.