Doncaster’s Experiment: Diouf, Pires, Chimbonda & a man with a phone 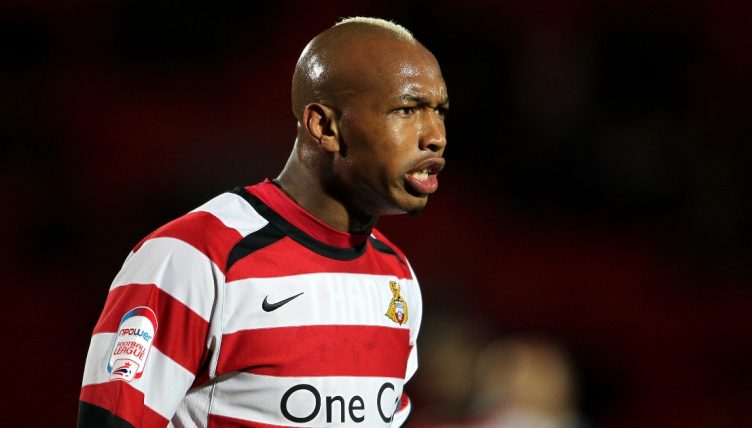 Doncaster called it “The Experiment.” To someone who didn’t know better, that might have sounded pretty exciting.

Because a footballing experiment could mean virtually anything. Playing four strikers, for instance, or enforcing a match-day menu of Red Bull and espresso. It could mean giving players rubber-finned Adidas Predators to make them shoot better.

But Doncaster’s experiment was something else entirely.

The 2011–12 season had started terribly for the club. With just a single point from their first seven games in the Championship, chairman John Ryan had sacked manager Sean O’Driscoll on 23 September, presenting Dean Saunders as his replacement the same day.

More important than the managerial switch, however, was the experiment, which Doncaster were already carrying out in a dank underground laboratory below the Keepmoat Stadium.

The experiment was this: for the next two seasons, chairman Ryan would hand over transfer duties to Doncaster-based super-agent Willie McKay — later to gain notoriety for his role in the Emiliano Sala transfer — whose clients at the time included Joey Barton and Charles N’Zogbia.

Using his extensive little black book of football connections, McKay would sign big-name players on short-term deals or loans to improve the playing squad. For this, he would collect a nominal wage of £100 per week.

But how could a club like Doncaster, bottom of the table and making huge financial losses, afford big names?

The idea, according to Ryan and McKay, was that Doncaster would act as a ‘shop window’ for big players. Players looking for a transfer to a bigger club would pitch up at the Keepmoat for two or three months, prove their fitness, and then if all went to plan would be snapped up by another team.

This, McKay believed, would benefit Doncaster in several ways. First, the club would attract players of an international calibre. Second, these players would accept low wages, motivated by the prospect of eventually moving to a bigger club.

In the case of loans, Doncaster could get even better deals. Parent clubs would cover about 90% of the player’s wages, expecting to recoup their losses with a future transfer.

And McKay promised that Doncaster would get a cut from any such transfer.

“We give [the players] the opportunity to play, then if another club comes in for them we split the fee: 40% to us, 60% to the selling club,” he explained at the time.

The hypothesis of the experiment sounded plausible. Why not look at unattached or out-of-favour players — mercenaries or not — if they were better than the current squad?

Just a few days after Doncaster appointed Saunders, they made their first ‘experimental’ signing: 32-year-old Pascal Chimbonda, formerly of Spurs and the France national team, who had been released by QPR the previous season.

Signing a short-term deal on just £2,000 per week, Chimbonda was forthright about using Doncaster as a springboard.

“I hope to do well until January and we will see what happens,” he said. “It is the dream of every player to play at the highest level, so if I play well and get the chance to go back in the Premier League then I will be very happy.”

It didn’t take long for other players to follow suit.

One week after Chimbonda arrived, Doncaster signed another defender with Premier League experience. This time it was West Ham’s 29-year-old Congolese left-back Herita Ilunga, who joined on a three-month loan.

At this point, things were already looking up for the club. Saunders (a friend of McKay’s, incidentally) had taken seven points from his first three games in charge, lifting the club out of the relegation zone.

However, McKay’s off-the-field business was just as exciting.

Rumours of big-name arrivals began to swirl around town. One day it was Bolo Zenden, the next day Mahamadou Diarra. What Doncaster got instead was the equally blockbuster though arguably more polarising signing of El-Hadji Diouf.

Diouf signed a three-month deal on 31 October after leaving Blackburn and failing to secure a deal with Sam Allardyce’s West Ham.

He cited his friendship with Chimbonda as a reason for joining, as well as the challenge of helping Doncaster survive.

“It is not about money,” Diouf said. “If I wanted that then I could have gone to Russia or maybe the Middle East but I don’t want to do that yet.”

It was this signing that put Doncaster’s experiment in the spotlight.

The game finished 3-2 to Doncaster, and fans began to believe that this experiment business might really work. Several national newspapers wrote pieces about the McKay arrangement, speculating about which international stars might join next.

A week after the PR-boosting Ipswich victory, 38-year-old Robert Pires — another Francophone in McKay’s Rolodex — was forced to address speculation linking him with Doncaster.

Doncaster people called me!i am happy they think i can help them but it's not in my plan to play there

The non-signing of Pires would become one of the enduring memories of the rollercoaster season.

Of that latest crop of arrivals, Fortune in particular looked good, but the club struggled to pick up results, winning just two of eight fixtures between the Ipswich victory on 5 November and the end of the calendar year.

On 7 December, Doncaster signed 36-year-old Senegal defender Lamine Diatta, once of Newcastle, on a two-month deal. But not even the manager could drum up much enthusiasm about it. “We need all the bodies we can get,” Saunders told BBC Sheffield.

Diatta would make the bench twice, never getting onto the pitch.

January was a pivotal month for Doncaster. As per the hypothesis of the experiment, the transfer window was going to be a time of upheaval: big clubs might come swooping for the goods in the Keepmoat’s shop window.

And perhaps more importantly, they might come swooping for star striker Billy Sharp.

Sharp’s goals were the only thing keeping Doncaster in the fight, but a £1.85m release clause in the striker’s contract became active on 1 January 2012.

Within a month, he was gone: Southampton were willing to pay the fee, and Doncaster lost a player who had scored 10 goals in 20 league appearances for the struggling side.

Fortune, Ikeme, Ilunga and Goulon went back to their parent clubs (though Ikeme and Ilunga came back a few months later), while more players — ranking higher and higher on the who the fucking hell are you? scale — came in.

Doncaster gave short-term contracts to forwards Mamadou Bagayoko and Habib Bamogo, both of whom had been playing in Greece, and completed loan deals for Spurs ‘keeper David Button, former Liverpool reserve Damien Plessis and unknown 22-year-old Lorient midfielder Fabien Robert (who would actually prove to be one of the experiment’s biggest successes).

But the club’s best January business was persuading Diouf to extend his contract amid interest from Russia.

“He’s probably the best signing this club has ever made,” said Saunders, presumably with the Lamine Diatta deal still in the back of his mind.

Chimbonda also extended his deal, and Beye (whom Saunders called a “world-class player”) eventually made his loan permanent.

These were small bits of good news at a club where confusion seemed to have overtaken the early optimism. The Robert Pires rumour already seemed long ago.

Doncaster and McKay pulled off one of the bigger coups of their season in March, when they signed 32-year-old West Ham striker Frederic Piquionne on a short-term loan.

Though hardly lighting up the English leagues, Piquionne had five years earlier played for France alongside Karim Benzema.

At this point, however, it was too little, too late.

Doncaster won just three games between January and the end of the season, and their relegation was confirmed with three games left to play after a dramatic 4-3 defeat to Portsmouth. Doncaster were 2-0 up within five minutes, but Beye received a red card and everything fell to pieces.

That night, Diouf was arrested following a brawl in a Manchester nightclub, and he didn’t play for the club again.

Once relegation was confirmed, chairman Ryan revealed that McKay would no longer be working with the club. The experiment — the football equivalent of burning someone’s pencil case over a Bunsen burner — was over.

“Willie’s brought some great players into this club but it just didn’t work,” Ryan told BBC Sheffield. “The experiment wouldn’t work in the third tier. We’re just too far down now.”

Doncaster finished rock bottom of the Championship. To say it “didn’t work” for the club was something of an understatement. Introducing a dozen Francophone mercenaries to a confused Championship squad had not caused any kind of chemical reaction.

Perhaps more damning of McKay’s plan (and his competence) was how the experiment didn’t end up working for anyone. Not Doncaster, not the players, not the other clubs involved.

The goal was to create a mutually beneficial arrangement in which top-tier players would use Doncaster as a stepping stone to a bigger move. Players would reach their former glories, and Doncaster would get a juicy cut of big-money transfers.

Yet this simply didn’t happen.

Both Lamine Diatta and Habib Beye retired after leaving Doncaster, while Pascal Chimbonda, Herita Ilunga and Herold Goulon spent the entire 2012–13 season without a club.

Chimbonda, who had hoped of returning to the Premier League, secured a deal with League One side Carlisle some 17 months after leaving.

Big-name attacking players hardly fared better. Following their short loans, both Marc-Antoine Fortune and Frederic Piquionne remained stuck at their parent clubs and would have to wait until 2013 for a transfer. We can assume that Doncaster didn’t receive any kind of incubation bonus when the deals finally happened.

In the end, Doncaster’s supposedly radical experiment was revealed for what is was: just an unpopular Scottish guy with a phone. They’d have been better off playing four strikers.