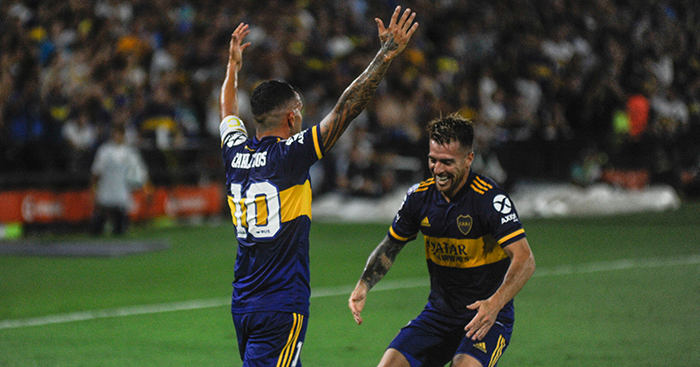 It was August 1997 and Diego Maradona was closer than even he imagined to the end of his playing days. But there was no doubt about who was the main attraction for the 50,000 Xeneize fans bouncing up and down on the terraces. They chanted his name as they made the stadium shake.

But that day, for the one and only time in an official match, he was not the only legendary Boca No.10 on the Bombonera pitch.

Of course, nobody else could wear el Diez’s sacred digits on the same pitch at the same time, but running out alongside him was a man who in the following years would take his shirt and his mantle as the idol of their fanatical support: Juan Roman Riquelme.

Riquelme had just turned 19 and was yet to make his mark on the history of the club. Instead of the No.10 that would come to define him, he had the nine on his back. But with two geniuses on display, those in attendance were in for a one-off treat.

They took on Argentinos Juniors – like Boca and Barcelona, a club that both men played for in their careers – and controlled the game from the off.

Riquelme saw a powerful right-footed shot fly past the post early on. Maradona immediately showed he was still capable of outstanding long passes, wonderful dribbles and those darting, jinking bursts of speed. Like usual, El Diego got a kicking, but as always, he got back up and kept going.

There was a wonderful sequence of first-touch passing between the pair, played so casually they could have been knocking a ball to one another on a deserted Buenos Aires backstreet to pass the time.

At the start of the second half, with Boca 2-1 to the good, Riquelme started to show off his passing range, too. Soon Boca scored their third and fourth.

The celebrations for the third should have been a warning of what was to come later that evening. Maradona, after converting a penalty expertly won by Diego Latorre, ran away, did a forward roll and crazily jumped up onto the fencing that separates fans from pitch, roaring at the fans with his eyes almost popping from his head.

In the next day’s edition of newspaper Clarin came the big report: “Maradona was called – together with the young central midfielder Juan Roman Riquelme – to fulfil antidoping control after the game which Boca won against Argentinos.”

The test came back positive for cocaine.

Passing on the baton

Maradona continued to play for several more weeks while the ban was appealed. And on October 25, away to arch-rivals River Plate, Maradona and Riquelme did both appear. But in that Superclasico, the heir symbolically replaced the king at half-time. It proved to be Maradona’s last professional match.

For years afterwards, despite the clear differences between them in both personality and playing style, the pair’s mutual admiration remained strong.

In 2002, Maradona praised his successor in a manner that he reserves for few. “I see myself in him,” he said, “my daughters shouted ‘idol’ [at him], and that is fine.”

In a 2006 interview for AS, Riquelme was asked to put together his ideal XI and said of Maradona: “There is only one player that would have to be in every team, and it is none other than Diego.”

But, in 2009, when Maradona was managing Argentina, El Diego openly made disparaging comments about his successor’s physical condition. Immediately, Riquelme quit the national team, saying “my codes are not [the same as] his and it is clear we cannot work together.” A rift opened that has never healed.

When the presidential election came around at Boca in 2019, nobody was surprised that the two men threw their weight behind opposing candidates. Maradona suggested that Riquelme had been bought.

“You cannot listen to offers and sell yourself to the highest bidder,” El Diego wrote on Instagram. “Dollars cannot weigh heavier than convictions.”

On Saturday night, ‘El Diez y El 10’, as they are referred to in Argentina, shared the Bombonera once again, but in circumstances very different to August 1997.

It was the last game of the Superliga season and Maradona was visiting as the manager of Gimnasia. Playing against Boca at the Bombonera, he was looking to boost his side’s chances of escaping relegation, which, in idiosyncratic Argentinian fashion, will be decided by combining the results of the current league season with the upcoming Copa de la Superliga tournament.

Boca, where Riquelme is now the vice-president after his man won the elections, were desperate to win to give themselves a chance of claiming the league title over River. Boca went into the game a point behind in the table, so needed a victory and a slip up from the old enemy.

Boca paid tribute to Maradona before kick-off, two of his team-mates from the 1981 title win presenting him with a commemorative plaque and shirt and the fans singing his name from the terraces, making the stadium shake once more. But Riquelme very deliberately did not arrive until after the tributes were over.

Carlos Tevez and Boca Juniors love having Maradona back at La Bombonera 💙💛 pic.twitter.com/otIaBgKSxJ

When Riquelme got there, he saw current fan favourite Carlos Tevez run over to Maradona and give him an emotive kiss on the lips.

Just over an hour later, with River being held to a 1-1 draw by Atlético Tucuman, Tevez received the ball on the edge of the box, drew back his right foot and unleashed a rocket. It was not far to the right of goalkeeper Jorge Broun, but the ball powered past Broun’s pathetic attempt at a save and into the net.

Tevez wheeled away, jumped up onto the fencing and celebrated like the Boca fanatic he is, like the Boca hero, on the level of Riquelme and Maradona, he now is. Cameras turned to Riquelme, who stood, like usual, looking like a man waiting in a particularly long queue at the bank.

Was there a particular reason why Riquelme looked like someone had just run over his dog right after Tevez scored Boca’s title-winning goal yesterday? Would also like to hear the story behind his ‘All nighter – 6pm-6am’ t-shirt too. pic.twitter.com/pww66CbNmz

Later, Tevez gave credit to both his fellow Boca idols for his match-winning moment. “Roman is very important,” he said, “He helped me a lot to find that Carlitos, this is the reward.”

And of El Diego, he declared: “I knew I had to kiss him, that he would give me luck. Diego is one of the chosen ones.”

But for Riquelme and Maradona to make their peace, it will take more than a few kind words from Carlitos. More even than seeing their beloved Boca win the league in such dramatic style over the old enemy on the final day of the season.