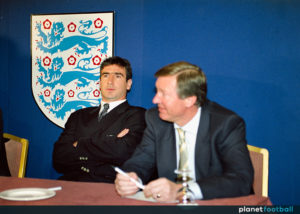 LONDON, UNITED KINGDOM – FEBRUARY 24: Manchester United player Eric Cantona (l) and manager Alex Ferguson, pictured at an FA disciplinary hearing after Cantona was sent off for kicking Crystal Palace player Richard Shaw and on his way back to the changing room he leapt over the barrier and attacked Palace fan Matthew Simmons, who had been using abusive language to the Frenchman, with a two-footed kung-fu type assault, at FA Headquarters on February 24, 1995 in London, England. (Photo by Allsport/Getty Images)