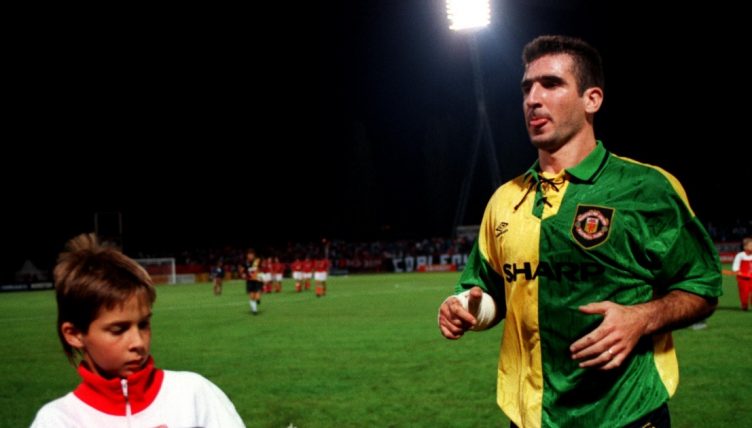 Eric Cantona had a seismic impact on English football – and he will also go down as one of the Premier League’s greatest ever bargains.

Cantona only spent a little over five years in England with first Leeds United and then Manchester United, but few players can claim to have such a lasting legacy.

Joining Leeds from Nimes for £900,000 in February 1992 then making the move across the Pennines for £1.2million nine months later, the Frenchman was a bargain buy not once but twice.

When Cantona first moved to England, he didn’t just need a new club. He needed a whole new start. He’d burned every possible bridge in France.

He’d displayed violent outbursts at Auxerre and Montpellier, failed to earn a consistent first-team spot at hometown club Marseille, had sworn at former national coach Henri Michel, and in November 1991 had been banned for four games for throwing the ball at the referee while playing for Nimes.

Michel’s successor, Michel Platini, conspired with his assistant Gerard Houllier to have Cantona touted around for a move to England by agent Dennis Roach, whom Houllier had dealt with as PSG manager some years earlier.

Cantona looked set to join Sheffield Wednesday initially after a trial, but Owls’ player-manager Trevor Francis dithered, allowing Howard Wilkinson and Leeds to steal a march on their Yorkshire rivals. Before Wednesday knew it, Cantona had agreed terms up the M1. 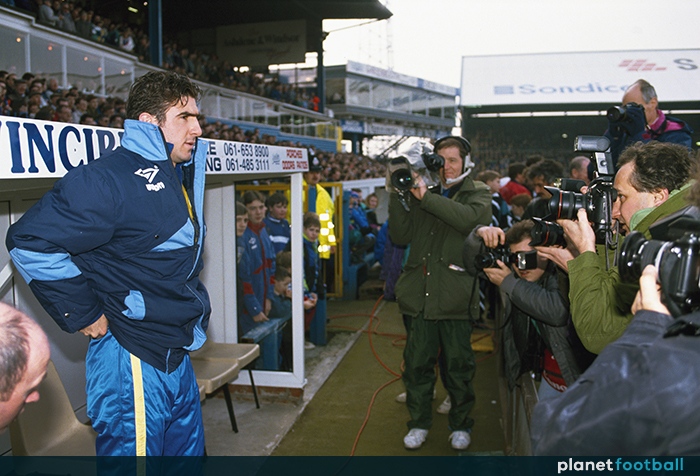 Concerns about his match fitness – he had spent two months eating and drinking heartily in the mountains, after all – meant Cantona started in just six of his 15 appearances for Leeds as they beat Manchester United to the title, but a bigger problem was that, as a withdrawn forward, he did not fit into Howard Wilkinson’s typically English 4-4-2.

Manchester United desperately needed to fill not one but two roles.

Their strike partnership of Brian McClair and Mark Hughes scored just 29 goals between them the previous season despite starting all but four of United’s 42 league games together.

Ian Wright and Gary Lineker alone had scored 29 and 28 respectively.

Alex Ferguson had been tracking Cantona for some time but must have thought it would take something pretty special to prise such a talented player away from one of their most hated rivals, let alone one that had won the league the previous year.

Moves for Beardsley, David Hirst, Brian Deane, and Alan Shearer all came to nothing, and Ferguson started the 1992-93 season playing much the same side that had finished the previous campaign. You can imagine his frustration.

For the £1.2m Manchester United paid for Eric Cantona in November 1992, they could have had:

– Tommy Johnson from the ankles up (Notts County to Derby County, 1.3m)

– All of Marco Gabbiadini (Crystal Palace to Derby County, £1.2m)

– One-third of Alan Shearer (Southampton to Blackburn Rovers, £3.6m). See? Told you Dalglish would come good. He just had the wrong Shearer first time round.

Having kept an eye on Cantona for a while, Ferguson took his opportunity gleefully when Wilkinson (or possibly Leeds general manager Bill Fotherby, depending which version you read) phoned Old Trafford to enquire about the availability of Denis Irwin, who he had been considering as a replacement for Tony Dorigo.

Ferguson, speaking via Man Utd chairman Martin Edwards, threw some names back the other way, including Cantona’s. To the surprise of Ferguson and Edwards, they received another call from Elland Road just minutes later: Leeds were ready to sell.

Things moved very quickly, and before November was out, Cantona was a Manchester United player. 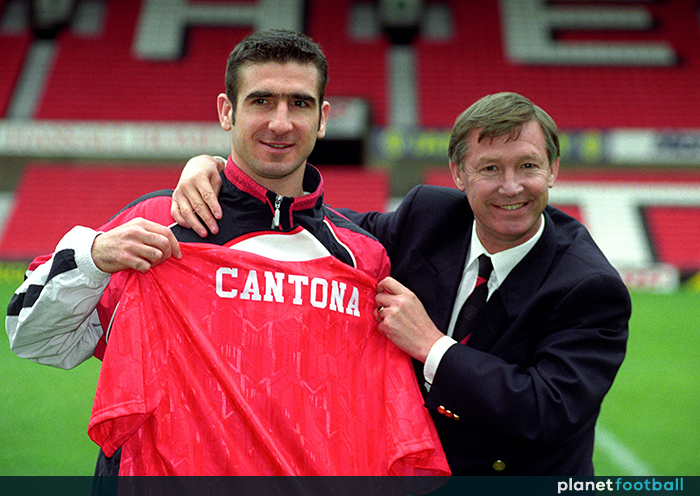 The £1.2million fee was so ridiculously low that Ferguson’s assistant, Brian Kidd, remarked: “For that money? Has he lost a leg or something?”

In one fell swoop Ferguson had signed both the creator and the goalscorer his side needed. The final piece of the puzzle had fallen into place.

Cantona didn’t just transform Manchester United, lifting them from fifth to first as they claimed the first of their incredible four titles in five years. He transformed English football.

Even at the bargain rate of £1.2million, Cantona was a little bit of a gamble for Ferguson, for exactly the same reasons Wilkinson had got rid of him.

Even putting disciplinary issues aside, Cantona was an almost unprecedentedly different type of player who required sides to play in a style never before seen in English football.

But Ferguson showed the adventure that Wilkinson did not to try something that had never been done before.

It was, of course, a triumph on a scale that nobody could have foreseen. 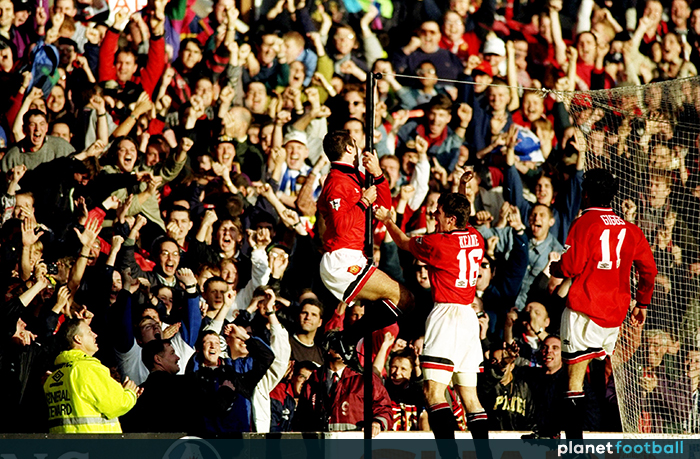 Cantona’s incredible success under Ferguson showed other clubs that when looking to solve a tactical problem, we were often better off looking at what sides were doing abroad. Without Cantona, perhaps England would have no Arsene Wenger.

Cantona showed that the biggest clubs could succeed with more cultured No.10s, which English football simply didn’t produce at the time. Without Cantona, perhaps there would have been no Juninho, no Gianfranco Zola, no David Silva, no Wayne Rooney.

Furthermore, Ferguson’s experience with Cantona emboldened a very good manager to make the brave decisions that would make him a great: signing 31-year-old Sheringham as Cantona’s replacement and getting four excellent seasons out of him, or getting rid of the prolific Ruud Van Nistelrooy in his prime to make room for a raw Cristiano Ronaldo.

Without Cantona, there might be no statue of Sir Alex Ferguson or Old Trafford stand bearing his name. 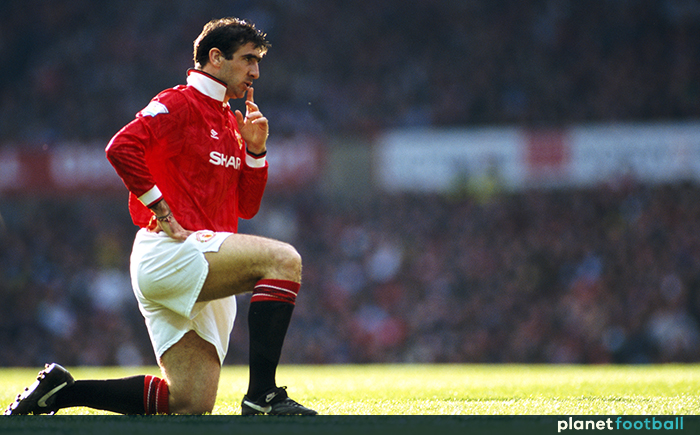 On a wider scale, Cantona, the first celebrity footballer the country had seen since George Best 25 years earlier, raised the profile of the English game from the doldrums it had been in in the 1980s.

French league regulations had prevented him for pursuing any kind of individual sponsorship, but in the brand-new, all-singing all-dancing, shiny shiny Premier League, he had the freedom to take on whatever commercial endorsements his club would allow: Nike, video games, Eurostar, and later, acting roles in major films.

Without a man of the profile and charisma of Cantona, the Premier League may never have become one of the most prestigious league competitions in world football.

Above all else, though, Cantona was just a bloody brilliant player. He was the man opposition fans hated the most and Manchester United fans loved above all others – the hallmark of an exceptionally talented player, and a ridiculous bargain.