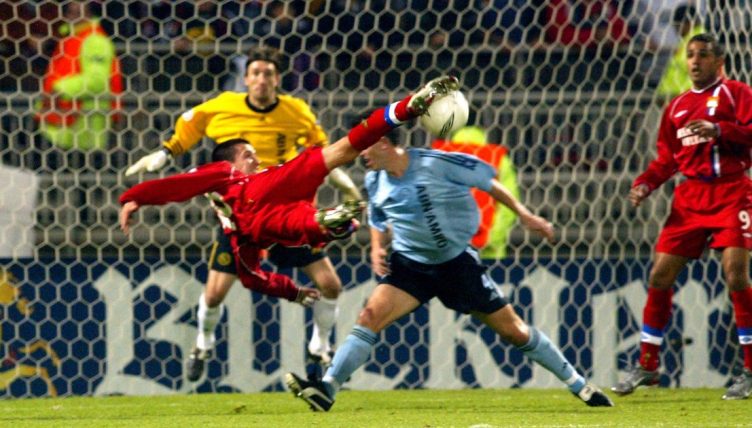 Despite enjoying a period of near-unprecedented success in French football around the turn of the millennium, Eric Carriere’s name may hardly register with you.

A searing mix of meticulous passing and electric pace, he helped Nantes return to the big time before kick-starting Lyon’s run of seven consecutive league titles.

Yet for all his talents, Carriere was often stuck living in the shadow of Zinedine Zidane and his exploits with Juventus and Real Madrid. While one is considered among the greatest footballers ever to have played the game, the other will be a mere footnote in history for most.

But it shouldn’t be that way.

A late bloomer, Carriere grew up in the idyllic commune of Leboulin in south-west France and joined the junior ranks of local side CS Auscitainslender, but his slender build and 5ft 8in fame saw many dismiss him as too limited physically.

But though he may have lacked the presence of Zidane, who cut enough of an imposing figure as a youngster for Cannes to snap him up, Carriere’s intelligence shone through on the pitch. An excellent student who would have fallen back on a career as a maths professor had he not made it as a footballer, his quick-thinking on the ball and eye for a pass eventually added up to big success.

Around the same time as Zidane was cutting his teeth at Bordeaux, Carriere was juggling his studies and playing football for local side Auch FC. The turning point came after he landed a place at the University of Toulouse.

Keen to continue playing, Carriere sought out opportunities nearer to his new home in the pink city and eventually found one with Championnat National side AS Muret. He took to the cut and thrust of the French third tier with aplomb, and his attacking talents soon caught the eye of Nantes manager Raynald Denoueix.

Denoueix, the coach widely credited with discovering players like Didier Deschamps and Marcel Desailly, liked what he saw and signed Carriere up in the summer of 1996.

By then Zidane, having announced himself on the European stage with Bordeaux, had hit the big time with Juventus, where he would go on to win multiple Serie A titles and reach the Champions League final two years in a row.

Juve had beaten Nantes in the semi-finals of the European Cup in the season prior to Zizou and Carriere’s respective arrivals, but while the Bianconeri were going from strength to strength, Les Canaris were struggling to attain the same heights.

Carriere initially struggled to make the step up to Ligue 1, with fitness issues seeing him spend much of the 1996-97 campaign learning his craft away from the first team, while the 1997-98 season proved to be one of transition for Nantes, who finished 11th.

Denoueix bided his time, though, easing Carriere into first-team life in an approach that eventually paid off with Nantes winning back-to-back Coupe de France titles in 1999 and 2000 along with the Trophée des Champion.

By 1999-2000 he was pulling the strings from the midfield, scoring five goals in Ligue 1, providing plenty more assists and dictating play from the middle of the park.

That summer Denoueix went in search of a striker that would bring the best out of Carriere. Someone equally adept at finishing off chances as laying them on for his team-mates.

He eventually settled on Viorel Moldovan, a Romanian target man who had scored freely with previous club Fenerbahce and would prove to be Nantes’ focal point and the perfect foil to Carriere’s attacking talents.

A match made in heaven

2001 was the year when the roles were reversed. While Zidane was enduring arguably his worst season with Juventus, Carriere was hitting new heights. Semi-finalists in the Coupe de France and Coupe de la Ligue, Nantes also reached the quarter-finals of the UEFA Cup, narrowly losing to Porto.

Their best performances were reserved for Ligue 1, though, with Nantes winning the final eight games of the season to be crowned Ligue 1 champions.

Signed for just £5.5million, Moldovan more than justified his transfer fee with 11 league goals and 22 in all competitions.

Carriere was the undoubted star of the show, though, scoring five goals and racking up 12 assists on his way to the Ligue 1 Player of the Season award – an award built on his dynamic partnership with the Romanian.

“He [Moldovan] was easy to find and he understood my game well,” Carriere later reflected. “I needed to lean on the striker who gave me the ball before he was in front.”

While Moldovan bagged the bulk of the goals, it was Carriere’s Duracell bunny-like energy and ability to attack and link up play at pace that often proved the difference. He was the one who pushed the team forward, building and often finishing off attacking moves like the one that saw him score in a decisive 3-1 over reigning champions Monaco.

Like Zidane, Carriere also had that innate ability to think one step ahead of his opponents. In another example, from a game against Bordeaux, he pulled off a near-impossible move, receiving the ball at speed with his back to goal, spinning and poking it under the on-rushing goalkeeper in one fluid motion.

Carriere was finally out of Zidane’s shadow and the world of football was starting to take notice. In the summer of 2001, France manager Roger Lemerre called Carriere up for that summer’s Confederations Cup. This was his chance.

Viewed as something of a warm-up to the following summer’s World Cup, Zidane opted against playing at the Confederations Cup following a busy domestic campaign. Carriere was given the opportunity to deputise in his absence and stake a claim for a place in the World Cup squad.

Handed the No.10 jersey as part of an experimental squad, Carriere made the most of his chance to finally upstage Zidane, scoring two goals and providing two assists in France’s three group stage games.

Though Carriere’s contributions to France’s efforts in the latter stages of the Confederations Cup proved less decisive, he nevertheless took home the tournament’s Golden Shoe, shared with Robert Pires, for the most goals and assists combined.

He wasn’t necessarily about to displace Zidane in France’s starting line-up, of course, but he’d certainly staked a serious claim to be included in Lemerre’s 23-man squad that would return to Japan and South Korea a year later.

That summer was one of upheaval for Carriere and Zidane with the former joining Lyon in a surprise £10.5million deal while the latter moved to Real Madrid in a record-breaking £46.2million transfer.

Carriere’s was the more contentious move, with Nantes fans angry and pundits questioning the motivations behind leaving the Ligue 1 champions for runners-up Lyon, a club that had never won a title in their entire history. Carriere saw it differently.

“I have been waiting for the deal to come through all summer,” he said following a protracted transfer saga. “To leave the champions for the runners-up is not a decline because Lyon are the most regular and the most ambitious club in the French championship.”

The moves came with their own unique set of pressures, but France’s two best playmakers would both rise to the challenge.

Combining effectively with Brazilian striker Sonny Anderson, Carriere helped Lyon end their long wait for a league title, sealing victory with a dramatic 3-1 win over Lens on the final day of the season.

It kicked off a period of dominance that would see Les Gones win seven consecutive league crowns – a spell that may not have been possible without Carriere’s sizeable influence.

Zidane, of course, would go one better, bagging the headlines and the limelight after scoring the spectacular winning goal in a 2-1 win over Bayer Leverkusen in the 2002 Champions League final.

Carriere still headed into the summer of 2002 optimistic about his chances of going to the World Cup with France, particularly as Pires was ruled him out of the tournament, but when the squad was announced, his name was the most notable omission.

Despite being far and away the best player in Ligue 1 for the past 18 months and impressing as Zidane’s understudy at the Confederations Cup, there was no place for the 29-year-old.

What made that a baffling decision was the players Lemerre chose to take in his place: Alain Boghossian, Youri Djorkaeff and Johan Micoud.

It wouldn’t have mattered had Zidane played – Micoud, in particular, was only supposed to serve as a Plan B – but when a thigh injury sidelined Zizou for France’s first two group games with Senegal and Uruguay, Les Bleus were left exposed.

First Djorkaeff and then Micoud struggled to fill the void, leaving France in need of a win against Denmark in their final group game, and relying on a half-fit Zidane to rescue them, they lost 2-0.

Though Zidane remained at Real Madrid for the remainder of his career, it was never quite as good as that barmy Champions League winner, save for a couple of La Liga titles.

And though it would be false to suggest Carriere went into decline after his World Cup snub, he certainly never reached the same heights again.

Jacques Santini, the manager who signed him for Lyon, departed that same summer to take up the vacant France job. A further two league titles followed under new manager Paul Le Guen, but Carriere found himself increasingly used as a squad player, with Michael Essien ushered in as a long-term replacement in the summer of 2003.

And though Carriere earned a couple more caps under Santini, he didn’t have quite the same Hollywood ending as Zidane. By the time the 2006 World Cup rolled around he had joined RC Lens, a club in terminal decline and one he would eventually suffer relegation with in 2008.

He finished his career with Dijon, eventually setting up a vineyard in the region and enjoying a richly-deserved retirement. For a while at least. Now more commonly spotted working as a pundit on French TV, Carriere’s intelligence and eye for the facets of the beautiful game still shine through.

Just don’t expect to see him move into management anytime soon – Zidane has probably trumped him in that department too.