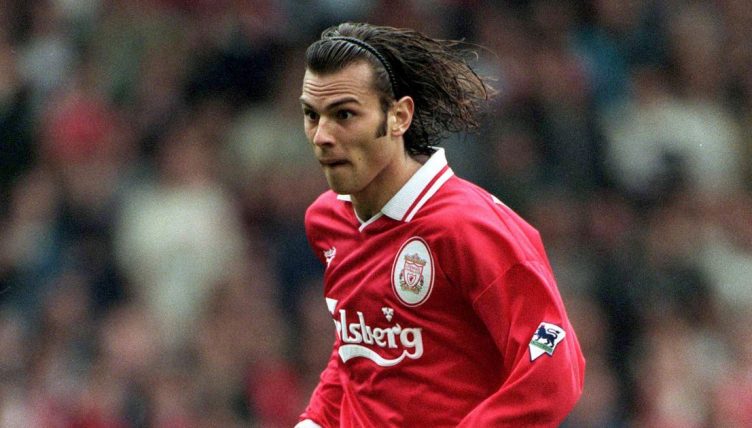 When you try to pinpoint when the Premier League became the global platform we know it as today, it’s hard to look past the summer of 1996.

In the 1995-96 season, just 13 players from outside the UK and Ireland made more than 10 appearances for the top five clubs. Manchester United had just Peter Schmeichel and Eric Cantona; Liverpool had none.

This was in large part due to a rule restricting Premier League sides to no more than three players from outside the UK and Ireland in their matchday squads.

The landmark Bosman ruling from December 1995 extended non-foreign status to all EU players, and suddenly the 308 non-UK players heading to England for Euro 96 represented an enormously attractive scouting opportunity.

The result was the first mass influx of foreign players into the Premier League.

Gianluca Vialli, Roberto Di Matteo and Frank Leboeuf signed for Chelsea, later to be joined by Gianfranco Zola. French midfield pair Remi Garde and Patrik Vieira joined Arsenal ahead of Arsene Wenger’s appointment. Even Middlesbrough got in on the act with the sensational signing of Juventus striker Fabrizio Ravanelli. 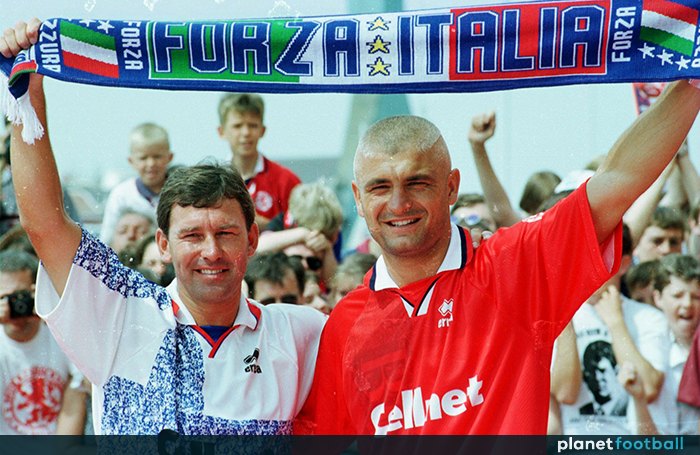 Liverpool and United were perhaps best placed to find their next superstar signing.

Anfield and Old Trafford were allocated as the host stadia for Group C, which featured 1990 World Cup winners Germany alongside Italy, who had just lost the 1994 World Cup final through Roberto Baggio’s agonising penalty miss.

But it wasn’t those international giants whose players caught the eye: it was Group C’s surprise package, the Czech Republic.

The former Czechoslovakia had good international pedigree, finishing as World Cup runners-up in 1934 and 1962, and winning the 1976 Euros through Antonin Panenka’s famous penalty. But with the country dissolving in 1993 and their place in the dreaded group of death, nobody expected them to get beyond the opening round.

Their squad seemed pretty unremarkable. Fifteen of their twenty-two players were at clubs in the Czech league, two had just been relegated from the German Bundesliga with Kaiserslautern, two were with third-placed Schalke, and captain Vaclav Nemecek plied his trade in Switzerland.

Their biggest name at that point was probably Patrik Berger, who had been on the fringes of Ottmar Hitzfeld’s Bundesliga-winning Borussia Dortmund side, while English fans were already familiar with Pavel Srnicek, the Newcastle United goalkeeper, who served as backup to Petr Kouba.

Things changed pretty quickly once the tournament got underway, though.

Just look at the players responsible for their most memorable moments: Pavel Nedved’s fourth-minute goal in their shock 2-1 defeat of World Cup finalists Italy, Vladimir Smicer’s late equaliser in a barmy 3-3 draw with Russia that put them through to the quarter-finals… where Karel Poborksy’s outrageous 18-yard lob saw off Portugal.

Thank you so, so much for this. pic.twitter.com/1pA47ca69T

Poborsky later told UEFA.com: “Jiri Nemec passed to me – I ran at two or three players and lost the ball, but it bounced back to me and suddenly I was behind the defence running towards goal.

“[Portugal goalkeeper Vítor] Baia was a long way off his line so it was the easiest thing to do. I almost did it too well – the ball went very high and for a moment I thought it would not drop into the net, but it did and it was a very important goal for us.”

After seeing off France on penalties in the semi-final, the underdogs took a surprise lead in the final as Berger scored from the spot, but Oliver Bierhoff’s double, including the first golden goal in European football history, gave Germany victory from behind.

Nevertheless, the Czechs had made their name, and although the Czech Republic was not yet part of the EU, the three non-EU spots were suddenly nowhere near as competitive, opening the door to big moves for their new stars.

Nedved, in particular, was hot property, and despite a verbal agreement to join PSV Eindhoven, he went to Lazio, where he spent five years before joining Juventus as one of the world’s finest players. 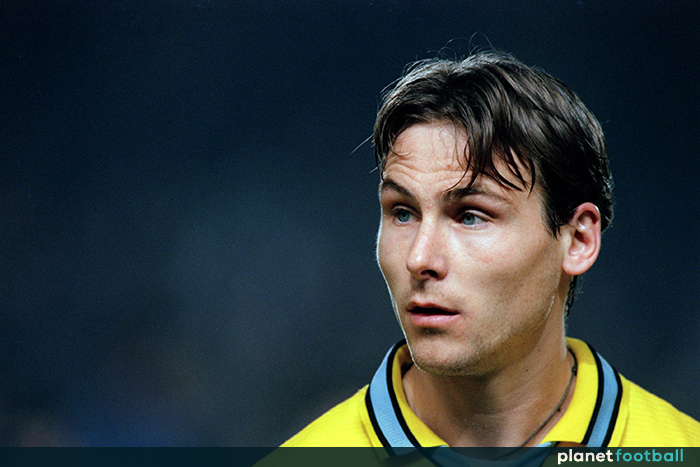 READ: A tribute to Pavel Nedved, the man who managed to replace Zinedine Zidane

Smicer was one of three players to attract Liverpool’s interest, and while he would eventually land back at Anfield – the site of his vital equaliser against Russia – the offer of first-team football took him to Lens first.

Berger and Poborsky, meanwhile, also gained interest from Roy Evans’ side, but Poborsky would instead opt to head up the M62 to join Manchester United.

While Poborsky was indisputably hard-working and talented, he found opportunities at Old Trafford difficult to come by. His cause was not helped at all by the emergence of David Beckham as competition for his preferred right-wing berth, with Poborsky an unused substitute in the opening day of the season as Beckham announced himself with that goal against Wimbledon.

As well as his struggles on the pitch, Poborsky was surprised by some of the more reserved, conservative aspects of British life.

He told the Prague Tribune in 2003: “I have lived in three countries, and each was completely different, even though for me, as a soccer player, the sport is the same everywhere.

“England is a very closed, cold country, and finding friends there is nearly impossible. But in Portugal my family became acclimated in just a few months, and after three years it was hard for us to leave.”

Having a disciplinarian like Alex Ferguson for a boss won’t have helped with that. In his book ‘Leading’, Ferguson writes: “I never understood why players would want to have long hair. Anything, even a few extra locks of hair, just didn’t seem sensible.

“I had my first issue with a player on this topic when Karel Poborsky came to Manchester United from Slavia Prague in 1996, looking as though as he was going to play for Led Zeppelin rather than United.

“I did manage to persuade him to trim his locks but even so, they were always too long for my tastes.” 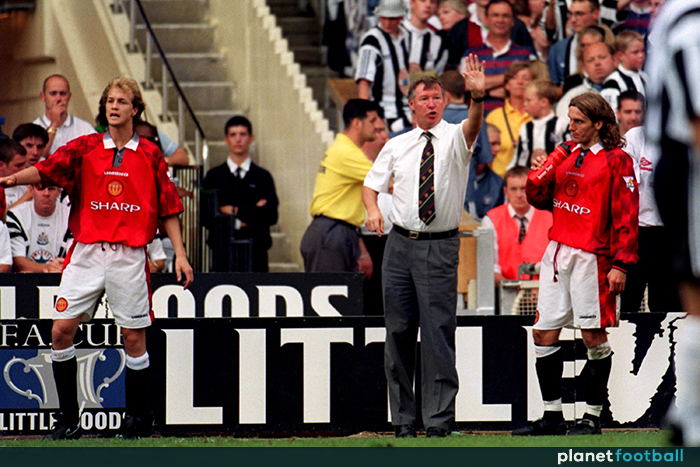 Just 18 months after being setting Europe alight, Poborsky was gone from Manchester United, opting to join Graeme Souness’ Benfica rather than continue to sit on the Old Trafford bench. He would find himself playing back in his home country – by way of a year of Lazio – by 2002.

But Poborsky doesn’t regret his time in England. “The move to Manchester United opened the world to me,” he told UEFA’s website. “It was the best decision of my life.”

However, it’s fair to say that of the two red Czech number 15s, Berger had the happier time. Four goals in his first three Liverpool appearances, including two in a 5-1 demolition of Ruud Gullit’s Chelsea, earned him the FA Player of the Month award and made him a firm fan favourite.

This was helped by Berger’s clear delight at being at the club, a penchant for scoring brilliant long-range efforts, and, in contrast to Poborsky, his contentment with life in England.

He has marvelled on more than one occasion that Alan Hansen and Kenny Dalglish were his neighbours, and raised his kids as die-hard Kopites.

Making a habit of scoring against Chelsea, scoring the decisive goal in the wonderful 3-2 victory in the Merseyside derby in 1999 that’s most famous for Robbie Fowler’s line-sniffing goal celebration, and setting up Michael Owen’s winner in the famous late 2-1 triumph FA Cup Final triumph over Arsenal in 2001 certainly didn’t do Berger any harm either.

After seven years at Liverpool he left for Portsmouth, where he scored one of the Premier League’s greatest goals, before spells at Aston Villa and Stoke rounded off 12 years in total in England.

Through Smicer, Tomas Rosicky, Milan Baros and Cech, Czech players have continued to make an impact on the English game since Berger and Poborsky led the way, but we’ll likely never see such excitement about two Czechs heading to the Premier League as in that summer of 1996.

READ MORE: Remembering the short-lived Silver Goal & the 2004 Czech side it robbed

TRY A QUIZ: Can you name every club to ever appear in the Premier League?