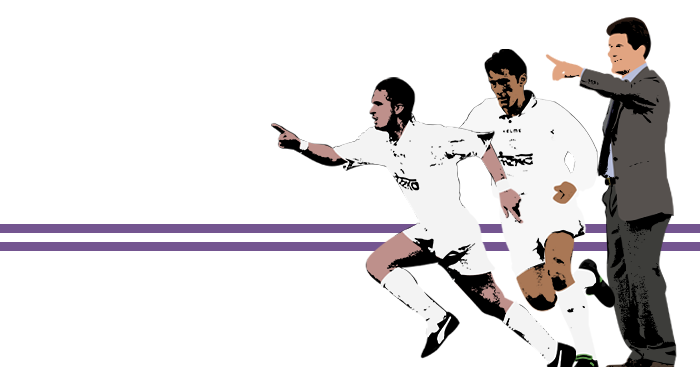 They had just recorded their worst league finish in 19 years and were set to endure a season of no European competition for only the second time since it began.

Real had won the league the previous season, with Ivan Zamorano top-scoring in La Liga, but 1995-96 saw them limp to sixth beneath Atletico Madrid, Valencia, Barcelona, Espanyol and Tenerife. As expected, it was panic stations at Estadio Santiago Bernabeu.

Fabio Capello was the high-profile managerial import called in. The Italian coach had enjoyed great success with AC Milan the previous season, leading them to the Serie A title by eight points, and he was given a healthy transfer budget to get his squad up to scratch and challenging for the championship once again.

For others, the lack of European football may have been a notable absentee pulling factor – but the allure of one of the world’s most successful clubs forced their transfer targets to sign at the dotted line on their fresh contracts with the long term firmly in mind.

Clarence Seedorf and Roberto Carlos were brought in from Capello’s native Italy via Sampdoria and Inter Milan respectively, while Predrag Mijatovic and Davor Suker were sourced as proven La Liga goalscorers from Valencia and Sevilla.

Add a 19-year-old Raul into the frame, who had a 19-goal season under his belt already, and Real Madrid were looking considerably stronger than at the outset of the previous campaign.

Mijatovic and Suker had past experience of playing together, having both featured in the 1987 FIFA World Youth Championship for Yugoslavia, with the now-nonexistent nation having lifted that title in Chile.

Suker netted three goals in the group stage, with Mijatovic grabbing two before then scoring in a 2-1 quarter-final win over Brazil. Suker grabbed the plaudits with a 70th-minute winner against East Germany in the semi-final, before netting a penalty in their winning shoot-out in the final against West Germany.

Suker went on to play for Croatia internationally from 1992, but the duo would now renew their partnership at club level.

“We get on well and we are accustomed to winning trophies together,” Šuker said on July 4, 1996.

“A lot of strange things must have happened for Madrid not to win the league. At my age of 27, I want to win multiple European cups.”

El Periodico de Catalunya predicted that summer that Real Madrid would opt for a 4-4-2 formation, with Suker and Mijatovic able to lead the line as a partnership, with young star-to-be Raúl playing off the front two or out on the left-hand side.

Across the country, Barcelona had swooped in and signed Ronaldo Luis Nazario de Lima from PSV Eindhoven – this was to be a season in which transfer fees and firepower did the talking. 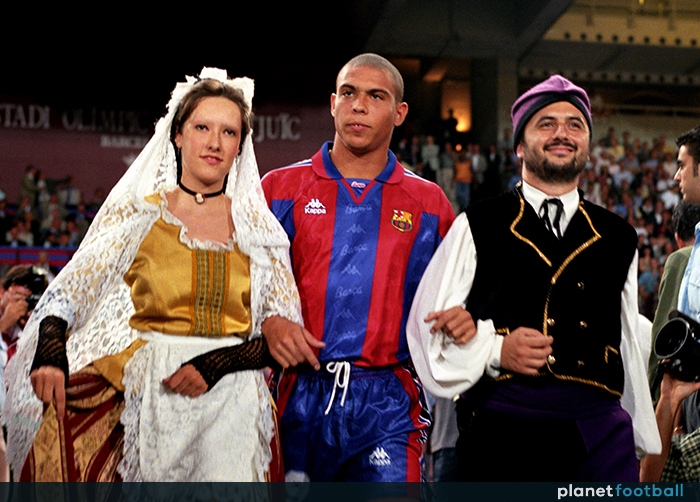 “With our investment,” Real Madrid treasurer Juan Onieva told EFE in October 1996, “we have beaten Barcelona heavily, with the fee they have paid for Ronaldo, we signed Mijatovic, Suker and Seedorf.”

But for a rather significant blot in Mijatovic’s copybook – he was seen spitting at Inaki of Racing Santander a few months into the season – Onieva did appear to have a point: Suker and Mijatovic combined to score five of Real Madrid’s six goals in a 6-1 routing of Real Sociedad in October.

However, question marks still remained over Capello and his imports. By October 28, Barcelona were four points above Los Blancos in the table, with the ex-Milan boss getting his first taste of the high-pressure nature of his new position.

“A lot of the league season remains, my team is in good physical shape and I am happy,” Capello carefully reasoned.

“Don’t worry about it [the gap],” Mijatovic added in a press conference. “With the league as long as it is and having three points to take per game, the only thing there is to do is be calm.”

The ex-Valencia striker, championing coolness to be the answer, then lost his own slightly when questioned about some of his missed opportunities in front goal, telling a reporter who asked if he was missing the target on purpose that he was “talking nonsense”.

Both Capello and Mijatovic knew what they were getting into by signing for Real Madrid – but one appeared to have a better handle on his temper than the other.

Real Madrid were still playing second fiddle in the table to Barcelona at the outset of November, with the media sirens still ringing in their ears. Ronaldo had 13 league goals in 13 games, while Suker could only offer nine during the same period.

However, with El Clasico on the horizon in early December, Barcelona slipped up. Goals from Jose Mari and Guerrero secured a 2-1 win for Athletic Bilbao, with a 25th-minute strike from ex-Sporting Gijon boss Abelardo proving to be only a consolation.

Real Madrid made no such mistake with a 4-2 win over Valencia on the same weekend, as Suker netted a hat-trick and Raul chipped in with one of his own, building up positive momentum ahead of the derby. 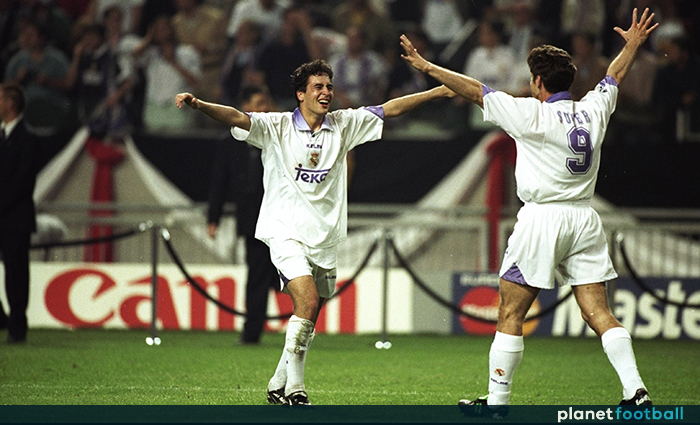 Capello’s men were top of the table for the first time of the season, a position that his ambitious side were not looking to relinquish any time soon.

The following week saw Real Madrid scrape a 1-0 win over Sporting Gijon, keeping the pace at the top of the league table, while Barcelona dominated Extremadura to win 3-0.

“The people in the street have asked me for a 5-0,” Suker proclaimed, in an effort to rally the troops a few days ahead of El Clasico. “I only have to say two words; to play and to die. I am not scared, but rather calm. We won’t have problems, our players will go out and fight until the death.”

His compatriot Mijatovic did not shy away from the media spotlight either, despite his goal tally paling into insignificance alongside Suker’s heading into the title six-pointer on December 7.

“[Barcelona’s defence] is vulnerable and I know what we have to do in order to get past it,” the striker told reporters cryptically. “I know which movement I need in order to score, but I am not going to say because I have to keep some things secret.” 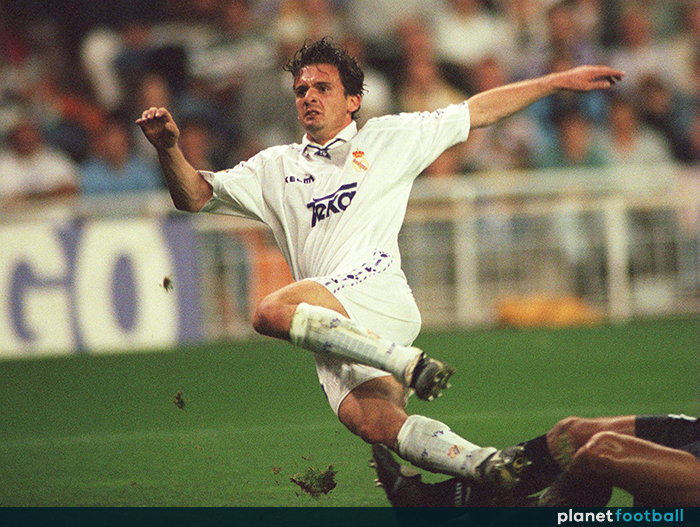 So secret, in fact, that he must have only told Suker about it. The duo played a vital role in a season-defining game.

On 24 minutes, Mijatovic took advantage of some slack defending, as Roberto Carlos was afforded the chance to swing in a searching free-kick from the left-hand side. Two defenders stretched to reach it, but instead the ball fell to Suker at the back post, with the summer recruit able to stab home a wonderful half-volleyed finish from a tight angle.

Then, just after the half-time break, Clarence Seedorf controlled well in midfield and clipped an inviting pass over the top for Mijatovic to chase. He span away from centre-backs Miguel Àngel Nadal and Laurent Blanc and calmly lifted over Vítor Baía as the Barca keeper rushed out to meet him.

After 48 minutes, the contest was wrapped up, sealing a four-point gap between Spain’s big two – allowing for Deportivo to leapfrog the Blaugrana and go temporarily second.

An eight-game unbeaten run followed for Real Madrid, fuelled by the freshness which a lack of midweek European football brings, which safely saw the Los Blancos into February with a six-point lead over Barcelona. When they did eventually lose 1-0 to Rayo Vallecano on February 19, Barcelona mimicked them by losing 2-0 on the road against Real Sociedad a day later.

Stinging from a missed opportunity to go nine points into the clear, Mijatovic labelled officials as “puppets” after being denied penalties against Rayo, while chairman Lorenzo Sanz led a war of words against referees – and Barcelona president Joan Gaspart.

“They [the referees], are achieving what Mr. Gaspart intended, that the referees harm us,” Sanz told Canal+. “It is clear that there is a campaign [against us] and we are going to try and uncover it at some point. Perhaps the referees are scared to give a penalty, as they feel pressured. We are paying for that campaign against Mijatovic.”

The Rayo ‘crisis’ was followed up by a 6-1 thrashing of Real Oviedo, with Suker grabbing yet another hat-trick, and Mijatovic and Raúl completing the rout. All of the talk of conspiracies would be forgotten but quickly uncovered again at the flick of a switch.

Espanyol were crushed underfoot next, courtesy of a Raul brace, with Real Madrid keeping a 100% record atop La Liga until the second El Clasico clash in early May. This time, Mijatovic was unable to engage in the mind games required to sway the focus of Barcelona’s personnel, and Luis Figo stole the show.

The Portuguese winger put Roberto Carlos in the spotlight, and the Real Madrid full-back couldn’t stand up to the constant scrutiny of the defensive side of his game, giving away a penalty just before half-time.

The Brazilian’s challenge on Figo was plastered across the third page of Mundo Deportivo’s Sunday edition, immortalising the left-back desperately trying to make a recovering tackle after getting the wrong side of his man.

Ronaldo, hailed as a waste of money in comparison to Real Madrid’s imports earlier in the campaign, stepped up and missed a penalty for only the second time in his footballing career, but the rebound was quickly put on a plate for him by Figo, allowing the Brazilian to spare his blushes.

His 32nd goal of the season sealed a narrow win and cut Real Madrid’s lead at the top of the pile to five points.

With two games left to play, Atletico Madrid were one of the two remaining hurdles for Real Madrid to navigate safely, and according to El Periodico’s Antonio Merino, their neighbours “did not want to play football.”

Mijatovic struck the post after 18 minutes, before Raul managed to open the scoring on 36 – bringing his league tally for the season up to 21 goals. Capello’s side pressed high and forced their advantage, with Fernando Hierro doubling their lead a few minutes before half-time.

After the break, Mijatovic followed up his first-half range-finder by making it 3-0, rendering a 64-minute goal from ex-Real Madrid striker Juan Esnáider entirely useless. Los Blancos were playing “party” football, according to Merino, wrapping up their title win in style, but already the knives had been sharpened for Capello’s ousting.

The Italian had fallen out with chairman Lorenzo Sanz, despite achieving the set objectives, and had already mapped his route back to Milan where he was set to take over once again for the 1997-1998 Serie A campaign.

“I have always been aware of the potential of this team,” Capello told reporters in the title-winning aftermath. “It deserves credit to have been first [in the table] for so long, in a league that lasts for as long as this one.”

From the match directly preceding their 2-0 El Clasico win back in December, Real Madrid stayed on course for their title in some style, remaining top of the table from that point onwards.

“Finally, it has been done,” Suker sighed post-match. “I said it at the start of the league season and now we have done it, this is the happiest day of my life.”

Suker finished with 24 goals, behind only Ronaldo in the race for the league’s golden boot, while Mijatović eventually racked up 14.

The two strikers had won a trophy together with the Yugoslavia youth team all the way back in 1987, and a decade later they returned to do the same on one of the continent’s biggest stages. The two raced over to the corner flag in post-match celebration together, frantically waving a Real Madrid emblem in front of the ultras and supporters which occupied the south ‘sur’ stand in total ecstasy.

Real Madrid needed a hero. As it happens, they ended up with a whole raft of them. And two of their number were the best of friends.