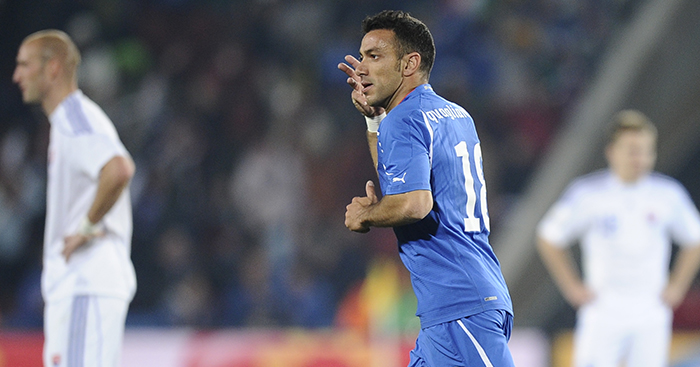 Fabio Quagliarella’s goal for Italy at the 2010 World Cup was completely meaningless, but that definitely doesn’t mean it isn’t worthy of celebration.

Italy were the holders going into the tournament and qualified with a minimum of fuss, dropping just six points and conceding just seven goals in their 10 group matches.

A number of the victorious 2006 squad travelled to South Africa, too, but one of the new faces was Napoli forward Fabio Quagliarella.

The 27-year-old was coming off the back of a relatively successful first season with his hometown club after impressing with Udinese. It was also a season which, unbeknown to us at the time, saw him battling a terrifying stalker situation.

Performing to a high level despite having every excuse not to do so, Quagliarella showed talent that would make him an asset to any World Cup squad, especially at a time when he ought to have been reaching his peak – but Marcello Lippi felt he could do without him.

Vincenzo Iaquinta and Alberto Gilardino were preferred up front in the first two group games, with Toto Di Natale and Giampaolo Pazzini both getting minutes from the bench as Quagliarella was forced to watch on as all four failed to score from open play in 225 minutes.

It was only at half-time in the final game, with Italy trailing to Slovakia after draws against Paraguay and New Zealand, that a player capable of magic with both feet was finally given his chance.

To say he made an instant impact would be rewriting history a little bit, but the impact he did make – while ultimately in vain – made for one of the most satisfying goals in the World Cup’s recent history.

Robert Vittek scored his second of the game; Di Natale pulled one back; Kamil Kopunek scored Slovakia’s third; and then – when all seemed lost – Quagliarella sent an inch-perfect chip over the head of Jan Mucha.

#OnThisDay in 2010, Fabio Quagliarella scored one of the World Cup's greatest pointless goals as Italy were beaten by Slovakia.pic.twitter.com/x5AkDCEAap

The issue with all seeming lost, however, is that it isn’t always the precursor to a fairytale comeback. Sometimes all seems lost because all is lost, and so it proved here.

A goalless draw in the group’s other game meant an equaliser would have seen Italy into the second round, but Quagliarella’s goal came too late.

The glorious consolation isn’t quite in the same ballpark as the clutch equaliser or winner.

However, while pulling off such a deft finish at 3-2 down, rather than 3-1 down, might be more impressive, that ignores how impressive it is to simply care enough to pull off something of that quality in a game that is almost certainly already lost.

One of football’s favourite clichés surrounds the post-match interview with the scorer of the winning goal, who invariably says it’s nice to be among the goals but the most important thing is the team getting the three points.

That’s all well and good, but there comes a point in some games where the time to make a positive impact for your team has been and gone, and you can take a moment to do something for yourself.

Quagliarella’s goal is like ending a difficult day by ordering yourself a present to arrive the next time you’re feeling low, or getting stood up on a date and responding by spending the money on a really expensive bottle of fine wine.

You might not have got what you wanted, but it’s still a night to remember.

TRY A QUIZ: Can you name Italy’s XI from their Euro 2020 final win v England?