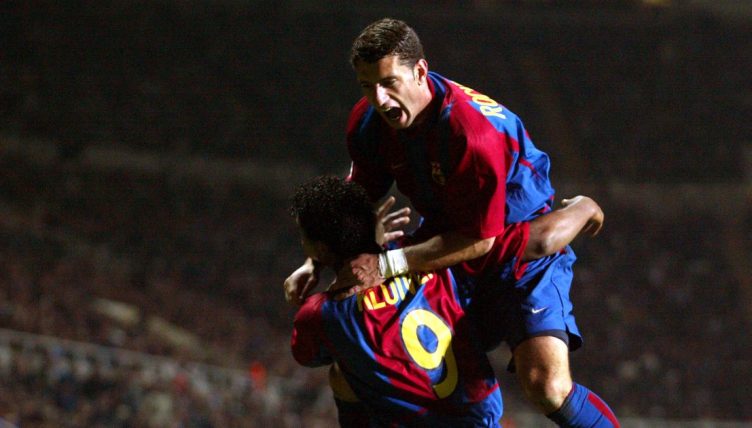 It may be a matter of frustration for Middlesbrough fans that, across a three-year spell on Teesside, Fabio Rochemback peaked in the final 11 minutes of his time there.

On May 11, 2008, in the 79th minute of the last match of the season, the Brazilian midfielder scored a sensational free-kick to make it 6-0 in an absurd game against Manchester City. It was just his seventh goal for Boro over those three seasons, and by some distance the best.

With two lovely assists in that same game — for notorious non-scorers Jeremie Aliadiere and Afonso Alves, no less — Rochemback showed Boro what he was capable of. Exactly two days later, however, he left the club on a free transfer.

It was typically enigmatic behaviour from a player once considered a teen prodigy for Internacional in Brazil and later the heir apparent to Pep Guardiola at Barcelona.

In reality, Rochemback was neither the future of Brazil nor Barcelona, nor even Gareth Southgate’s Middlesbrough.

He was something arguably more interesting: a sometimes skilful, frequently lazy and often controversial player capable of extreme ups and downs, and of thwacking the ball very hard from very long distances.

The last thing you need while Afonso Alves is busy scoring a hat-trick is Fabio Rochemback bursting the net with a free-kick.#OnThisDay in 2008, Middlesbrough spanked Manchester City 8-1.#Boro #UTB #MCFC pic.twitter.com/6Q66m4IBMj

Monday marks 20 years since Fabio Rochemback made his debut for Brazil. Aged just 19 at the time, the midfielder was part of Luiz Felipe Scolari’s squad for the 2001 Confederations Cup in Japan and South Korea, and Scolari introduced the youngster at half-time of the opening match.

From Rochemback’s perspective, things could hardly have gone better. Brazil beat Cameroon 2-0, with both goals coming after the debutant’s introduction.

And although Brazil’s subsequent results were borderline shameful — draws with Canada and Japan were followed by defeats to France and Australia — Rochemback started all four, giving him hope of a bright international future.

That future lasted another six weeks and was of meagre brightness. Picked for Brazil’s Copa America squad that same summer, Rochemback started the opening fixture, a 0-1 defeat to Mexico, and was afterwards used sparingly as Brazil were knocked out by Honduras in the quarter-finals.

Scolari picked mostly Brazil-based players for those two tournaments — Ronaldo, Rivaldo, Ronaldinho, Roberto Carlos and Cafu were all absent — but Rochemback, one of the domestic trialists, didn’t do enough to prove he was better than Brazil’s Europe-based stars.

The summer of 2001 was busy for Rochemback in other ways. Across the Atlantic, far from Porto Alegre, Carles Rexach’s Barcelona were undergoing something of a rebuild; experienced players like Jari Litmanen, Emmanuel Petit and captain Pep Guardiola were leaving, and replacements had to be found.

Rochemback was identified as a potential Guardiola 2.0 and was brought in for around £9million alongside fellow South American youngsters Geovanni and Javier Saviola.

But things didn’t go to plan for Rochemback. Barcelona endured two disappointing campaigns, and not even a great goal against Liverpool in the Champions League was enough to convince the Catalans of Rochemback’s merits.

The midfielder enjoyed better days in Portugal between 2003–2005 during a two-year loan at Sporting, scoring eight league goals in his debut season and adding more long-range strikes to his portfolio, including a belter of a free-kick against Feyenoord. In his second season, Sporting were UEFA Cup runners-up.

That was when Rochemback decided — reluctantly, according to most sources — to take the ‘Gaizka Mendieta trail’ from Catalonia to Teesside, joining Steve McClaren’s Middlesbrough on deadline day of August 2005.

The following May he was picking up another UEFA Cup silver medal as Boro lost to Sevilla, and he spent two more seasons in the Premier League, showing glimpses of Juninho-like talent but never looking up to the pace of the game around him.

“We liked Rochemback,” chairman Steve Gibson told the Teesside Gazette years later. “He was a really clever footballer. I don’t think he knew what he had because he was unbelievably talented, a one-off.

“But he was hard work to manage. Perhaps he would have achieved much more if he had been a bit more dedicated in his lifestyle and training regime.”

Following that memorable free-kick against Man City, Rochemback returned to Sporting for the 2008–09 campaign, scoring once. (Another free-kick, obviously.)

Rochemback’s later years didn’t have the glamour of 2001, but they did contain several moments of interest.

The midfielder returned to Brazil in August 2009 to sign for Gremio, fierce rivals of Internacional, prompting abuse from Internacional fans (the ‘Colorados’) and uneasiness from Gremio fans (the ‘Gremistas’).

“It was difficult because I started at Inter,” he told Globo Esporte in 2011. “The staff [at Gremio] looked at me with suspicion, despite the fact that I had always been a Gremista. The fans needed to understand that my first professional opportunity was at Inter, and that I am a professional. But I was always a Gremista.”

Despite the controversy of the transfer, Rochemback ultimately became captain of his boyhood club, although Gremio underperformed in his final year.

Football wasn’t the only thing on Rochemback’s mind in Brazil. In June 2011, he was questioned by police following the alleged discovery of frozen bushmeat and a cockfighting training centre on a farm he owned — crimes that could have warranted up to one year in jail.

The player’s father, Juarez Rochemback, denied any wrongdoing on the part of Fabio.

“The farm is for raising chickens, not fighting cocks,” he said. “They also said there was a boar, but it was just a pig. This is someone who is jealous of him.”

Rochemback didn’t own any fighting birds in China, but, shortly after turning 30, he moved there to join newly-promoted Dalian Aerbin (now known as Dalian Professional), competing in their maiden Chinese Super League season.

With little expected of the team, the Brazilian thrived. And when the club brought in another Barcelona alumnus, Malian midfielder Seydou Keita, they ended up finishing fifth.

The goals came freely for the veteran Rochemback in China. Freely or cheaply. The majority of his seven goals in the Super League were free-kicks or long-range strikes; one of them, his penultimate goal for Dalian, was direct from a corner.

It seemed a good match between club and player, although Rochemback subsequently lodged a complaint with FIFA alleging that Dalian owed him nearly $1million in image rights payments.

Rochemback’s professional career ended somewhat abruptly and prematurely. After leaving China, the 32-year-old was on the brink of signing for Sport Recife in Brazil, but the deal fell through. And from that point on, the midfielder only played at an amateur level.

However, there was a silver lining to all that. It meant that Rochemback’s last ever game — a 3-1 win for Dalian against Liaoning FC — was marked with yet another free-kick goal. (Not considered worthy of archiving by the Chinese Super League but, on past evidence, it was probably a screamer.)

These days, Rochemback is back in Brazil breeding Criollo horses, which are presumably more lucrative than roosters.