Fabrizio Ravanelli at Middlesbrough: A wonderful striker but a bit of a sh*t 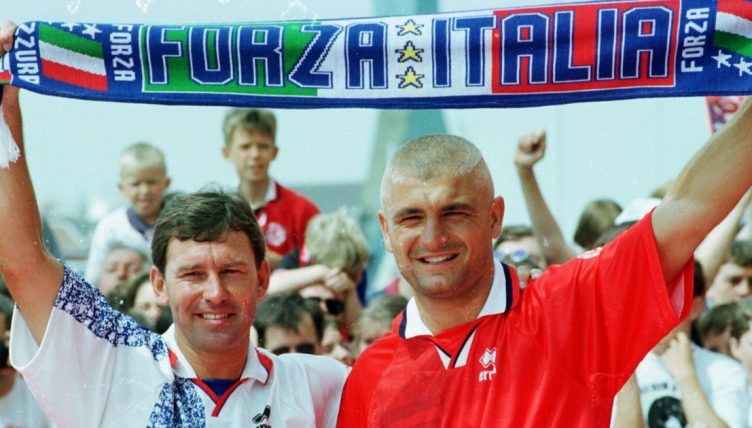 We’re still finding it difficult to make sense of Fabrizio Ravanelli’s year at Middlesbrough more than two decades later…and we wouldn’t want it any other way.

To say Ravanelli wasn’t the sort of player who should have ended up at Middlesbrough is an understatement. Even within a truly baffling set-up, where Juninho and Emerson rubbed shoulders with Craig Liddle and Phil Stamp, the Italian stood out.

Indeed, every way you looked at the White Feather’s season, both on the pitch and off it, you’re left scratching your head about the entire process.

The start of the 1996-97 season was momentous for Arsène Wenger’s arrival in English football, but Ravanelli ushered in the new era of European stars before an understated Frenchman even arrived at Arsenal’s training ground.

He had top-scored for Juventus the previous season, including a goal in the Champions League final, but the arrival of Christian Vieri and Alen Boksić left him as the odd one out.

Even so, while he might have expected to leave Turin, moving to Teesside was a different matter altogether. The Independent‘s Nick Duxbury called the move “another pointer to the growing power of the Premiership on both the home front and in Europe”, but even that felt like a huge understatement.

Boro had only won promotion in 1995 and finished in mid-table in their first season back – there was normally a longer cooling-off period before deals of this magnitude.

If you looked at the raw numbers, you’d think Ravanelli had a near-flawless season. He scored 16 goals in 33 league games, and 31 in all competitions as his team reached two domestic finals. That seems unequivocally good, right?

Well, if you peer beneath the surface and read the other stories about that campaign, it feels like a miracle that he had time to even play for Boro, let alone score all those goals.

“Half of the squad hated him and the other half loved him,” midfielder Craig Hignett later told FourFourTwo, describing his new team-mate as the 90s equivalent of Lionel Messi or Cristiano Ronaldo when it came to talent alone.

“He worked hard and he was one of the best finishers I’d seen, but as a man he rubbed people up the wrong way. He was selfish in everything he did”.

Unwittingly, Hignett’s comments paint a pretty good picture of the divisions within English football even to this day: there are those who believe selfishness is a cardinal sin, and those who believe if a player backs up that kind of behaviour by performing on the pitch then we can give him some leeway.

Ravanelli certainly did the business on the pitch from the get-go, scoring a hat-trick against Liverpool on his debut, but the eccentricities went further as the year went on and became tougher to mitigate.

One thing we’ve learned in the last couple of decades is that footballers have a lot of time on their hands. And we mean a lot.

In the 90s, though – before the top performers were drowning under the weight of endorsement deals and media obligations, they had even more hours in the day to keep themselves occupied.

In Ravanelli’s case, there were rumours that this involved an entourage of five or six people who followed him everywhere – including to training sessions. Unless they hung around to collect the ball when it flew off behind the goal – unlikely given Ravenelli’s accuracy in the league – we can’t imagine this being a net positive for the squad as a whole.

As well as this, and as well as suggestions of regular trips to the bookies, there’s one even more illustrative story from Ravanelli’s former team-mate (and room-mate that season) Jan Åge Fjortoft.

When the pair were out for dinner, Ravanelli allegedly attempted to leave without paying, and when questioned by Fjorfoft he said confidently that the club would pick up the tab. That’s the problem with being a massive fish in a tiny pond: you’re big enough that everyone recognises you but so big that you feel untouchable.

There was a sense that the club needed the Italian more than he needed then, so much so that – after an interview in January in which he said “perhaps if I had seen certain things beforehand I would have chosen differently” – chairman Steve Gibson maintained that wouldn’t happen.

And when Ravanelli was scoring goals for fun while others were very much not, are you surprised?

“A football spectacle at the Riverside Stadium”

On this day in 1996, Ravanelli and Juninho were at their entertaining best for @Boro… pic.twitter.com/MN5mjfL9JO

Of course, when you feel untouchable, you’re perhaps at your most vulnerable to someone taking an unexpected swing. And in Neil Cox’s case, the fisticuffs were literal.

Cox had left his team-mate out of a predicted Boro XI in a newspaper interview, ostensibly due to Ravanelli suffering from injury at the time, and when the piece ran with a sensationalised headline it didn’t exactly go down well.

Indeed, while it wouldn’t have been the best preparation for any game, it was even worse for coming on the eve of the FA Cup final.

“On the Saturday, it was all over the back page: ‘Cox – Rav should miss out’. So while we were having the photos taken for the suits and sunglasses, he decided to spit and throw a punch. I dived in, fists flying,” the defender told FourFourTwo.

Unsurprising, Boro lost – Roberto Di Matteo and Eddie Newton scored Chelsea’s two unanswered goals – and that was, in the eyes of many, destined to be an underwhelming swansong for the White Feather.

He had missed the last two games of the season as Boro failed to get the points they needed to survive, and there was no way he’d stick around in the second tier. Surely.

He actually did remain for two more games, scoring in one of them, before heading to France with Marseille and then returning to Italy and winning another Serie A title with Lazio.

More than two decades on, he is no doubt as to what was his biggest achievement on Teesside.

“What I am proud of the most is that I contributed to Middlesbrough’s development as a club,” he told us. “I was from a club like Juventus, very well organised, and so I made some suggestions that Boro’s management followed, like building up a new training complex for the team.

“I am happy that they understand and followed my suggestions, and I know that now Middlesbrough is one of the leading clubs in England, even if they now play in the Championship.

“I still have Boro’s fans in my heart and I am sure I am in theirs.”

Just maybe not in the hearts of all of the players.

READ NEXT: Fabrizio Ravanelli: ‘I loved everything about my season with Boro’