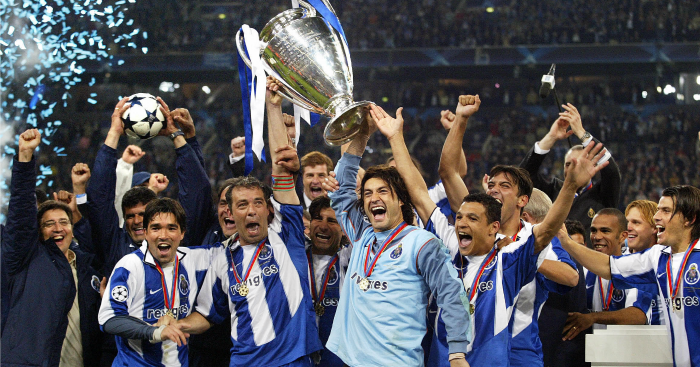 What does a great manager do? Ideally, they take a group of players and make them greater than the sum of their parts. Perhaps never in the history of the game has a manager done that so well as Mourinho did in such a short time at Porto.

What is remarkable about that Porto team is how unremarkable it was. This was not a side that had been built up over many years: seven of the team that started the final against Monaco had been at the club for two years or less.

Nor was it a side of youngsters who would stay as a unit for years to come. The average age of that starting eleven was 27.7, and besides goalkeeper Vitor Baia, not a single one of them remained at the club beyond the summer of 2005.

Neither was it a group of wonderful individuals who, through either happenstance or great scouting, found themselves in the same place at the same time. Only the post-Porto careers of Paulo Ferreira, Ricardo Carvalho and Deco can be described as unqualified successes. 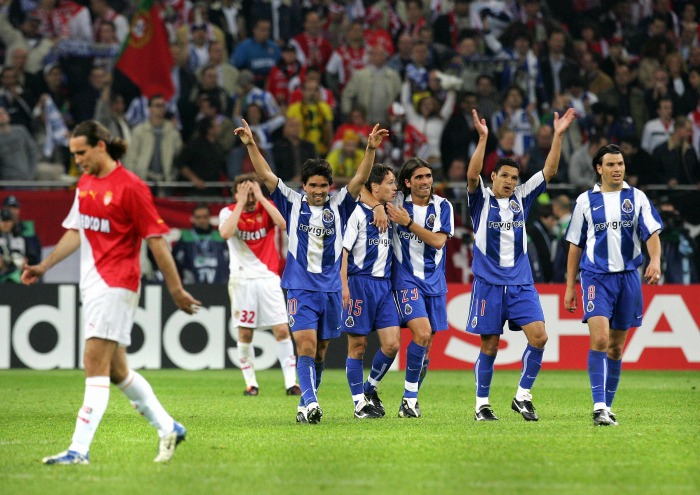 Even accounting for the presence of those three, this was not a side that screamed ‘Champions League winners’, as the post-Mourinho careers of the rest of that starting eleven attests.

Three (Costinha, Maniche and Derlei) went to Dynamo Moscow for unremarkable spells in 2005; Carlos Alberto went back to Brazil after just a year at the club and spent most of the rest of his career out on loan; Jorge Costa closed out his career with Standard Liege; and Baia was gradually phased out of the side before retiring in 2007.

Two of the players tried their hand in England to mixed results. Nuno Valente spent the last four years of career playing second fiddle to Gary Naismith and Leighton Baines at Everton, and Pedro Mendes had an undistinguished 18 months at Tottenham before winning the FA Cup with Portsmouth and the league title with Rangers.

No, what delivered this side to European triumph was their hot young manager, Jose Mourinho.

Having learned the ropes under Bobby Robson at Sporting and then at Barcelona, Mourinho had made the step up to a full-blown managerial position at Porto’s great rivals Benfica, but he only lasted nine games before a change of president saw him turned out on his ear.

He soon rebounded: a successful six-month spell with Uniao de Leiria led to Mourinho getting the Porto job that had once been Robson’s in January 2002, brought in to replace the labouring Octavio Machado, who had delivered the ignominy of the club’s first third-place finish for 20 years. 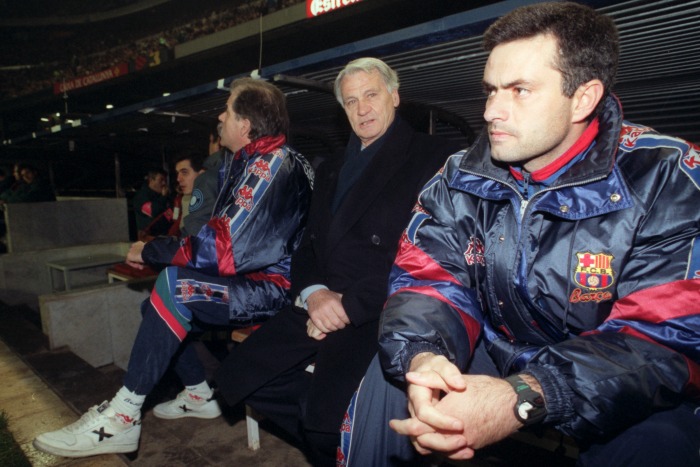 The squad Mourinho inherited and then added to consisted of a truly ragtag bunch of misfits and under-achievers.

Baia had been at Barcelona with Robson but was unceremoniously dropped by his successor Louis Van Gaal. Captain Jorge Costa had fallen out with Machado, leading to him being exiled on loan to mid-table Charlton Athletic. Star playmaker Deco had been released from his contract at Benfica by Graeme Souness aged just 20. And so on.

Exercising the tactical nous that would make him the most in-demand manager in world football, Mourinho was able to carve this group into a solid and cohesive unit.

That’s an understatement: His first ever full season of management ended with success in all three competitions the club had entered.

The Primeira Liga was won by 11 clear points – Porto finished seven points behind Sporting the season before – despite no Porto player scoring more than 13 goals all season.

The Taca de Portugal was claimed with a 1-0 victory over Mourinho’s former club Uniao de Leiria, and the UEFA Cup followed with a 3-2 extra-time win against Martin O’Neill’s Celtic.

Even within the context of Portuguese domestic football, it was a remarkable achievement, but to add an unexpected European triumph to that was something else.

What is striking about Porto’s run to the UEFA Cup final is how un-Mourinho-like the results are: only the quarter-final against Panathinaikos was settled by a single goal over two legs.

There was a 6-2 aggregate win over Polonia Warsaw, a 6-1 win against Denizlispor, and most impressively, a 4-1 win over Lazio, with all the goals scored in the first leg.

The performances of top scorer Helder Postiga attracted the attention of Tottenham, with Benni McCarthy and Carlos Alberto both brought as replacements for a combined £2.5million less than the fee received for Postiga.

READ: Seven Spurs signings who were meant to be the business…but weren’t

McCarthy proved a huge success the following season, scoring 20 of Porto’s 63 league goals as they retained their league title.

This side now looked rather more like the Mourinho sides we would come to know: more defensive, more frustrating, making the fine margins that separate success and failure dance to his well-organised tune.

Playing in the Champions League meant there was a clear step up in the difficulty of Porto’s European games in that second season, and after two games they looked in danger of leaving at the group stage after being held to a 1-1 draw in Serbia by Partizan before collapsing to a 3-1 home defeat to Real Madrid.

But they rebounded with back-to-back victories over Marseille, before claiming a home win over Partizan, and then with both sides already qualified for the knockout stages, they played out a respectable 1-1 draw at the Bernabeu.

In the round of 16 came two belting games against Manchester United, with Porto coming from behind to win the first leg 2-1 through McCarthy’s brace.

United looked to be headed to the quarters on away goals after Paul Scholes put United ahead in the second leg, but Costinha converted the rebound after Tim Howard saved McCarthy’s 90th-minute strike to put Porto through and send Mourinho careening down the Old Trafford touchline. 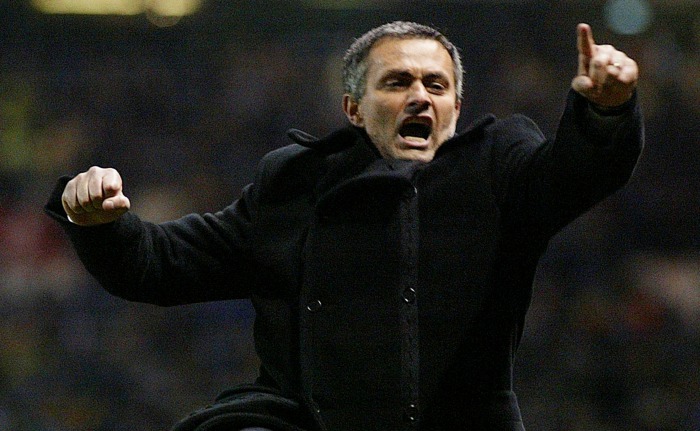 Porto were well in control of their quarter-final, seeing off Lyon 2-0 at home and taking a comfortable 2-2 draw on the return trip, but they were forced to grind out the semi-final, with Derlei’s penalty an hour into the second leg against Deportivo La Coruna the only goal across two ties.

That set up the incredibly unlikely final of Monaco v Porto in Gelsenkirchen.

After soaking up early pressure from first-time finalists Monaco, Mourinho’s side were handed a boost by the departure of the influential Monaco skipper Ludovic Giuly through injury.

Porto capitalised, with Carlos Alberto giving Mourinho’s side the lead six minutes before the interval, and perhaps frustrated by seeing two goals ruled out for offside, Didier Deschamps played into Mourinho’s hands by throwing on forward Shabani Nonda to go with four men up front.

With that, Porto and Mourinho claimed their sixth trophy in just two seasons, becoming champions of Europe for only the second time in their history.

You know the rest of the story as far as Mourinho is concerned: he left for newly-rich Chelsea just two days after that Champions League trophy.

Porto, meanwhile, immediately returned to their pre-Mourinho status: perennially in the domestic title chase but reaching the Champions League quarter-finals at best.

They may not have had the lasting success, they may not be at the top of the tree in Portugal anymore – but for two glorious, wonderful, barmy years, Porto were the best team in Europe despite not having anywhere near the best players.

Despite a gluttony of riches in the years that have followed, those two years at Porto may well still be Mourinho’s greatest-ever success.

TRY A QUIZ: Can you name every Champions League final goalscorer since 2000?