Fallen Giants: A tribute to the great Samp of Vialli, Mancini & Lombardo 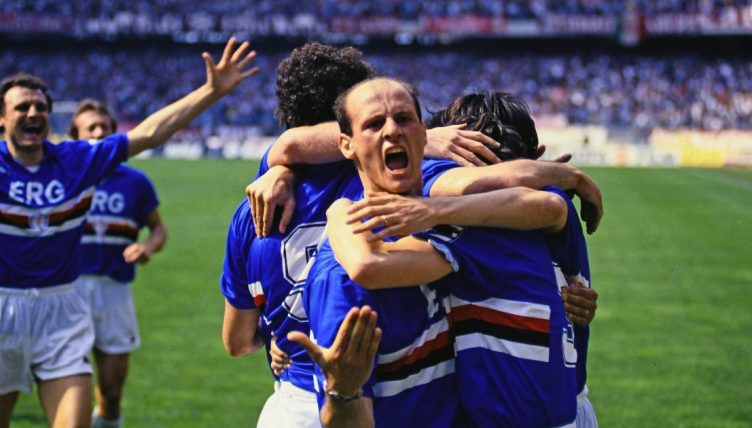 There were a lot of brilliant Italian teams during the 1980s and 1990s – and Vujadin Boskov’s Sampdoria side was right up there with the best of them.

Going into the 1990-91 season, Sampdoria had developed something of a reputation as a cup team, winning multiple honours in the previous few seasons without ever really challenging for the league title.

Between 1985 and 1990, the Genoese outfit won three Coppa Italias and reached two Cup Winners’ Cup finals, claiming the trophy at the second time of asking, but their league form saw them finish anywhere between 11th and fourth over the same period, which nevertheless represented their best-ever form in Serie A.

In fairness, this was unsurprising. This was a golden age of Italian football, with Arrigo Sacchi’s Milan winning consecutive European Cups in 1989 and 1990.

Diego Maradona had just enjoyed his most prolific season yet for Napoli by scoring 16 in 28 league games as he led them to Serie A triumph, while Inter boasted the brightest talents of new world champions Germany in Andreas Brehme, Lothar Matthaus and Jurgen Klinsmann.

In fact, of the 10 outfielders selected for the 1990 World Cup team of the tournament, only Dragan Stojkovic, Paul Gascoigne and Roger Milla didn’t play for one of Sampdoria’s Serie A rivals, with Milan legends Paolo Maldini and Franco Baresi featured alongside Golden Boot winner Salvatore Schillaci of Juventus, Inter’s German trio, and of course, Napoli’s Maradona.

So it would be incredibly revisionist to say anyone expected anything much of Sampdoria ahead of the 1990-91 season, despite boasting what was, in hindsight, an incredibly strong spine, all under the tutelage of the astute tactician Vujadin Boskov.

The Serbian’s managerial career had taken him on a journey around Europe, beginning with a spell as Yugoslavia manager before trips to the Netherlands with Den Haag and Feyenoord, then Spain with Real Zaragoza, Real Madrid, and Sporting Gijon.

After pitching up in Italy and leading Ascoli to Serie B triumph in 1986, he was appointed as Eugenio Bersellini’s successor at Sampdoria, for whom he had made a handful of appearances as a player in the 1961-62 season.

Already in situ upon his arrival in the summer of ‘86 was the foursome that would take Sampdoria to glory: 22-year-old striker Gianluca Vialli, 21-year-old silky forward Roberto Mancini, 27-year-old lightning-quick and tough-as-nails defender Pietro Vierchowod, and a 19-year-old giant of a youth prospect and possessor of perhaps the greatest name in football history, Gianluca Pagliuca.

Considering how close that foursome was to reaching their respective primes, and the knowledge now of how brilliant we now know all four would become, it is clear in hindsight that a perfect storm was ready to blow into the port of Genoa.

Boskov supplemented that in 1989 with arguably his most important signing, the tricky winger Attilio Lombardo, appropriately nicknamed Popeye for his gangly, bald-headed appearance.

Just like Vialli five years before, Lombardo had joined Sampdoria from Cremonese following a triumphant season in Serie B, and, again like Vialli, he would go on to terrorise the sternest defences in the world on a regular basis. 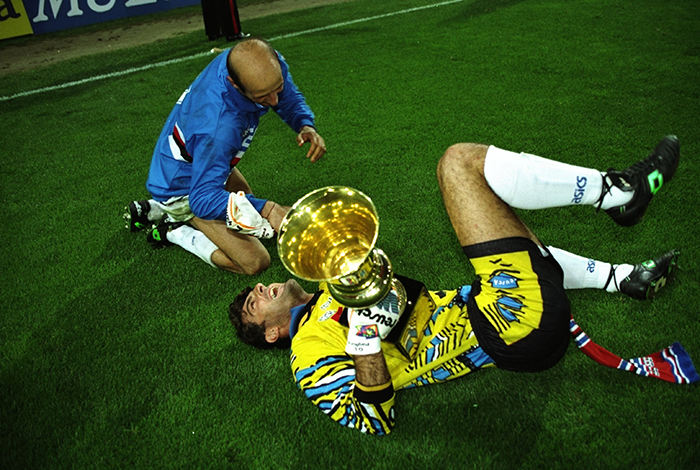 Sampdoria’s cup exploits proved the perfect preparation for the side, allowing them to take a winner’s mentality into the new season despite their representatives at a World Cup on home soil enduring a frustrating tournament: Vialli was in terrible form, Pagliuca and Mancini were left on the bench throughout, and Vierchowod was only handed an appearance in the third-place play-off.

Boskov will have referred his side back to their triumph in the 1990 Cup Winners’ Cup, in which Sampdoria had not lost so much as a single leg of a game on their way to beating Anderlecht in the final courtesy of two extra-time goals from Vialli.

Not that Boskov needed to do too much to boost morale. Much like this year’s Tottenham, the side showed clear signs of togetherness and genuine affection towards one another, even verging on the frivolous on occasion.

This was reflected in their incredible style on the pitch. Mancini played like melted chocolate, Lombardo was unstoppable down the wing, Vialli was a supreme and varied finisher, and unusually for a centre back, even Vierchowod’s most notable attribute was his incredible pace, which led Gary Lineker to describe him as the toughest defender he ever faced. 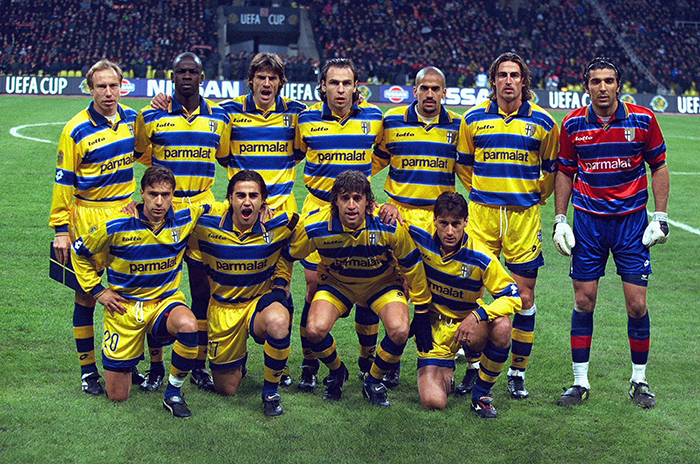 The steel in the side was provided by Fausto Pari, who shielded the back four and gave that attacking trio the latitude to play with just as much openness and verve as they liked.

The injury-enforced absence of star striker Vialli for the first seven league games was a blow for Sampdoria, but they struggled through unbeaten despite a lack of goalscoring power and even claimed a 1-0 victory over reigning two-time European champions Milan at the San Siro through Toninho Cerezo’s sensational volleyed goal.

Further unbelievable volleys from Mancini and the returning Vialli helped Sampdoria to beat Serie A holders Napoli 4-1 – also away from home – just three weeks later, a result and performance so scintillating that Sampdoria’s unlikely title prospects suddenly seemed like a real possibility, regardless of Napoli’s own travails.

Whether through heady giddiness or simply an accident of the fixture calendar, Sampdoria promptly went on to win just one of their next eight.

At least it was the right one to win: they recorded a 3-1 smash-and-grab against closest title rivals Inter through a late Vialli penalty complemented by a Mancini strike as Inter pushed for an equaliser.

That game was followed by two more embarrassing defeats: at home to Torino, then away to struggling Lecce – that was one of the relegated side’s six wins all season.

But Sampdoria’s see-saw season wobbled back the other way as they won an incredible nine of their next 10 games, including impressive victories over Juventus, Parma, Milan, and another 4-1 victory over Napoli that would prove to be Maradona’s last game in Italy.

The coup-de-grace, however, was their encounter with Inter in an absolutely bonkers match that is remembered as one of the greatest games in Italian football history.

With Sampdoria three points clear of Inter at the top of the table before the match with just three games to follow, this had the feel of a real title decider that Inter could not afford to lose.

Red cards were shown and flares were thrown. An Inter goal was disallowed, woodwork was struck, and shots were cleared off the line. Pagliuca had an absolute stormer with a ridiculous 14 saves including a Lothar Matthaus penalty.

On the balance of the performance, Inter were worthy winners, but the scoreboard at the end of the game showed Sampdoria 2, Inter 0.

That left Sampdoria needing just three points from as many games to claim their first ever Serie A title, and a 3-0 demolition of Lecce in the second of those games delivered the trophy in characteristic style.

They weren’t done yet. In a final celebratory flourish, Sampdoria’s players bleached their hair blond en masse for their final game, a 3-3 draw with Lazio in which they came back from being 2-0 down after just nine minutes.

Sampdoria failed to maintain anything like a title challenge the following season, finishing 18 points behind unbeaten Milan in a 34-game season in which a win was worth just two points.

But their standing as a great cup side continued, and they survived a tightly-contested group stage to reach the final of the European Cup against Johan Cruyff’s Barcelona at Wembley.

Remarkably, this was only Barcelona’s third-ever European Cup final appearance, having lost to Benfica in 1962 and Steaua Bucharest on penalties in 1986, meaning we were guaranteed a first-time European champion.

The game was deadlocked through 90 minutes and into extra time until Barcelona won a free kick 25 yards out after a nothing foul by substitute Giovanni Invernizzi on Eusebio Sacristan.

Unfortunately for Sampdoria, Barcelona had free-kick specialist Ronald Koeman on the field, and he duly stepped up to hammer home Hristo Stoichkov’s layoff through a crowd of charging Italians and past Pagliuca.

A fourth Coppa Italia in nine years followed in 1994 before the club suffered relegation in 1999 despite boasting a star-studded squad.

The club has never come close to reaching the dizzying heights of the late 80s and early 90s, but they’ll always have that perfect storm to remember fondly.