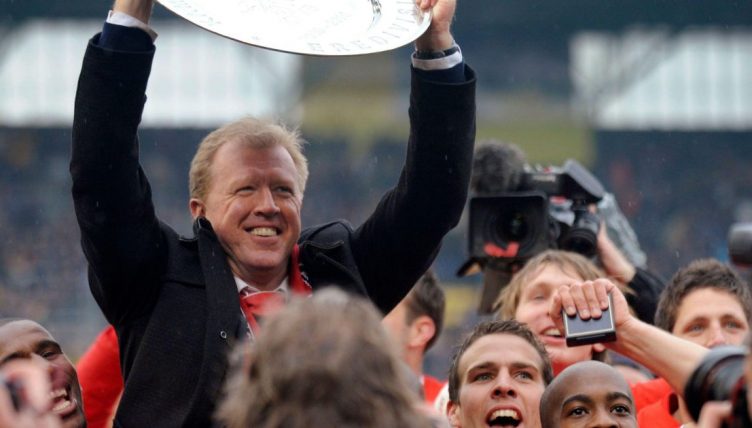 There is no better illustration of the near-impossibility of judging a manager’s ability than Steve McClaren – the man who will soon return to his old job as Manchester United assistant boss, this time alongside Erik ten Hag.

On the face of it, Sir Alex Ferguson’s treble-winning number two did a sterling job at Middlesbrough, taking them to the UEFA Cup final and the FA Cup semi-finals in 2006, having led them to an impressive seventh-placed finish the year before and an unexpected League Cup triumph in 2004, the club’s first-ever piece of major silverware.

But the 2005-06 season was McClaren’s career in microcosm: Boro beat Arsenal 2-1, Manchester United 4-1 and Chelsea 3-0 at the Riverside but lost 7-0 in the return fixture against Arsenal, 4-0 at home to struggling Aston Villa, and 2-0 at home to an utterly awful Sunderland side who won only two other games all campaign.

It was the same story in the cups, despite their excellent runs. Their route to the FA Cup semis required replays against sixth-tier Nuneaton Borough and Championship side Coventry.

Their UEFA Cup progress, meanwhile, was stuttering. Boro actually lost one leg of all their ties, squeaking past Stuttgart and Roma on away goals and needing two four-goal comebacks in the second leg of both their quarter-final against Basel and the semi against Steaua Bucharest.

Both of those ties were settled by the same substitution – bringing on Massimo Maccarone in place of a defender – with the Italian scoring a last-gasp winner in both games. Sadly, there was to be no four-goal comeback in the final as they sunk to a 4-0 defeat to Sevilla.

How do you analyse a season like that, where every giant step forward is followed by a massive faceplant straight into the ground?

Is the manager a genius for engineering decisive wins against three of the top four, or a chancer who dropped points to every team except relegated Birmingham over the course of the season?

Were those game-changing comebacks indicative of a man who can change games, or of a manager who consistently gets his selection wrong?

After that 4-0 defeat to Villa in February 2006, McClaren was 150-1 to become the next England manager; three months later his appointment was confirmed after the FA were embarrassingly turned down by their clear first choice, World Cup winner Luiz Felipe Scolari.

Given McClaren’s standing as a national team coach under Sven Goran Eriksson, the feeling was very much that the Boro man had risen to the England job by default rather than by design.

As a result, McClaren’s appointment divided the fans from the pundits. Fifty-six per cent of the respondents to a BBC poll predicted that McClaren would not make a good England manager, despite the vocal backing of respected commentators like Ferguson, Eriksson, Alan Hansen, and Sir Trevor Brooking.

On this occasion, the fans were right. McClaren’s tenure as England manager began with mockery over his newly whitened teeth, made all the more conspicuous by McClaren’s tendency towards a big toothy smile. 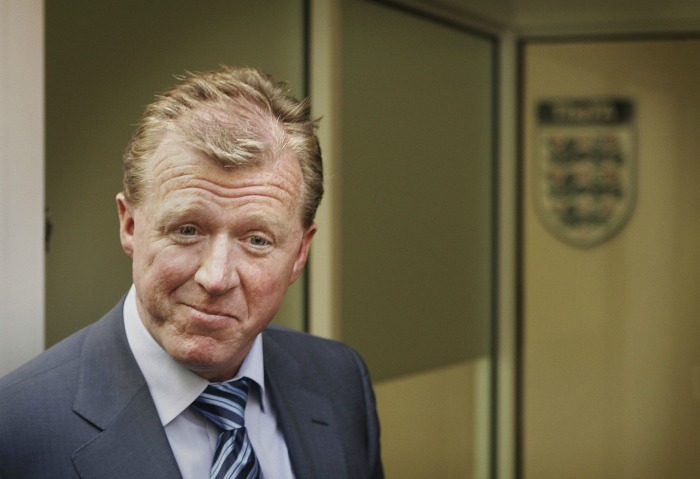 Public relations didn’t get any better from there, and his England reign ended with ignominious failure under an umbrella.

Scott Carson practically tossed Nico Kranjcar’s tame 35-yarder into his own goal in the eighth minute a 3-2 defeat against Croatia, causing England to miss out on a major tournament for the first time in 14 years and damning all managers in England to stand unprotected in the rain forevermore.

Taking over at Twente

His reputation tarnished, McClaren took some time away from the game before throwing his hat into the ring for the vacant Blackburn Rovers job in summer 2008.

McClaren actually turned down an offer from FC Twente, seemingly to watch the Blackburn situation play out, but when it became clear that Rovers were lining up Paul Ince as Mark Hughes’ successor, he returned to Twente signalling his acceptance of their offer.

In doing so, McClaren was following in the footsteps of another man who had headed for the Netherlands after leaving the England post.

On his unveiling, he explained: “Sir Bobby Robson told me that this would be a nice challenge for me.

“He also told me that FC Twente is a fantastic club and that I would feel at home. I am excited to be working again at a club that fits me well. I am looking forward to this new challenge.”

Twente had finished fourth in 2007-08, and McClaren continued their momentum in his first season, with the help of soon-to-be Manchester United boss Ten Hag as his assistant. McClaren steered the Enschede-based club to a then-best-ever second-place finish, behind Louis van Gaal’s dominant surprise champions AZ Alkmaar.

With Van Gaal departing AZ for Bayern Munich and his successor Ronald Koeman struggling badly to keep their title-winning form going, a power vacuum opened up at the top of the Eredivisie.

The most obvious contender to fill that void was perennial challenger Ajax, then managed by Martin Jol and boasting a talented young squad of players who would go on to become household names across the North Sea: Maarten Stekelenburg, Jan Vertonghen, Toby Alderweireld, Christian Eriksen and Luis Suarez, who would score a staggering 35 goals in his 33 Eredivisie appearances that season.

Ajax certainly had it all stacked up in their favour, and their goals for and against at the end of the 34-game season read: goals for, 106; goals against, 20.

They scored at least three goals in all their home games except two, conceding just four times in the whole season. Unsurprisingly, then, Ajax were unbeaten at the Amsterdam Arena, winning 16 of their 17 home games. 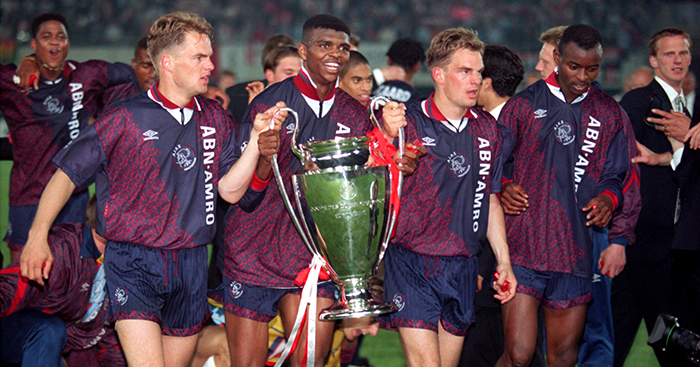 The problem for Ajax is that Twente matched that record. Only third-placed PSV came away from Twente’s Grolsch Veste with a point as McClaren’s side won game after game, despite a relative lack of star power in the side.

With Marko Arnautovic on a season-long loan at Jose Mourinho’s treble-winning Inter, only Bryan Ruiz, Cheik Tiote and Luuk De Jong would now attract a flutter of recognition among English fans.

Yet the team worked and it was unquestionably McClaren’s construction. Despite spending less than 40 per cent of what Ajax did during his time at Twente – and turning a £10.4million profit in net spend terms, more than any other side except Heerenveen – McClaren worked wonders to sign seven of his first-choice title-winning side.

As in the UEFA Cup with Middlesbrough, McClaren’s side made an incredible habit of winning games from behind, with Bryan Ruiz scoring a number of crucial goals.

Ruiz set the tone early on by scoring a 90th-minute winner in a 3-2 victory over Utrecht before scoring vital equalisers in three successive Twente wins from behind, against VVV-Venlo, Heracles Almelo and reigning champions AZ – the last of which also required a 90th-minute winner, this time from Blaise Nkufo.

Late Ruiz strikes also proved decisive against Vitesse and NEC in both the home and away clashes with the two sides.

But none of Ruiz’s 24 Eredivise goals that season were more important than the one he scored on November 8, 2009, when Twente beat Ajax 1-0 in Enschede to maintain their standing at the top of the table and move six points clear of the Amsterdammers.

That was the eighth of a club-record 12 consecutive wins, with Ruiz scoring in all of the last 10, just two games short of Pierre Van Hooijdonk’s all-time Eredivisie scoring record.

Two 0-0 draws after the winter break saw Twente fall behind PSV in the title chase, a situation only worsened by their first defeat of the season, a 3-0 loss to Ajax in Amsterdam. But PSV hit a dry spell of their own, allowing Twente to take a five-point lead to Eindhoven ahead of their March clash with their nearest title rivals.

A 1-1 draw kept things in McClaren’s control and they won their next three in style, with Ruiz scoring a hat-trick in just four minutes and 20 seconds in a 3-0 win over Sparta Rotterdam.

A 1-0 defeat at AZ allowed Ajax to pull just a point behind with two games remaining, but Twente did not falter, claiming 2-0 wins over Feyenoord and NAC Breda to bring the title to Enschede for the first time.

The club’s long-standing motto, ‘One day we will be champions’, had finally come true, and McClaren became the first English manager to win a top-tier league title anywhere in the world since Robson’s triumph with Porto in 1996.

With nothing left to prove at the club, McClaren departed for brief and unhappy stays at Wolfsburg and Nottingham Forest before returning to Twente for an unsuccessful second spell, followed by disastrous times with Derby and Newcastle.

McClaren’s two wonderful seasons at Twente only deepen the confusion about his managerial skills. How do we make sense of a career that sinks England and Newcastle to their lowest points of the past 15 years but also takes unfancied sides like Middlesbrough and Twente to major finals and title victory?

Presumably, Steve would simply point to his league title medal and flash a broad, toothy smile.

Ranking England’s most heartbreaking defeats since 1990