Fernando Torres will forever be remembered as a Chelsea flop by those not associated with the club, but he’ll always have a place in the heart of the club’s supporters.

Chelsea and Roman Abramovich will have expected more than 20 goals in 110 Premier League appearances from a man they paid £50million for in January 2011, and it would be impossible to argue he was not a disappointment on the whole – but that’s certainly not to say he didn’t have his moments.

Not that many of them came in his early days at Stamford Bridge.

In fact, having scored 91 goals in 244 appearances for Atletico Madrid and then a quite wonderful 81 in 142 games for Liverpool, Torres failed to score at all in his first 903 minutes for Chelsea.

When he ended his goal drought and finally scored his first goal for the club, it came against a minor rival, West Ham, with little significance attached to it other than what many hoped would be the return of El Niño.

But that strike proved to be his solitary goal of the season. 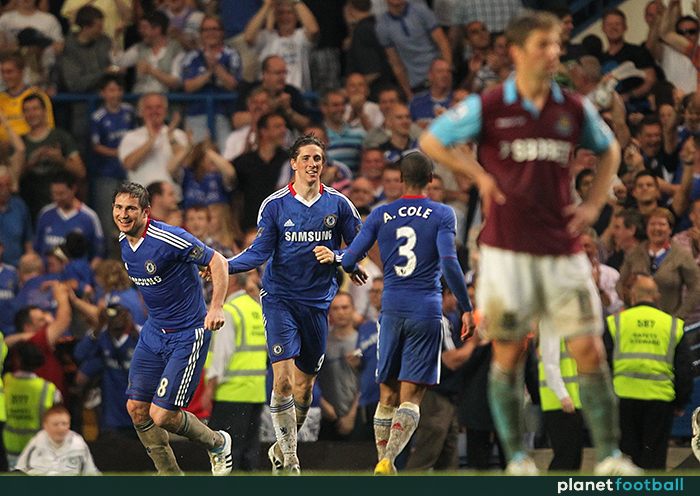 Still, Chelsea weren’t about to just give up on their investment. After all, he had only arrived in the January transfer window and had little time to settle in at Stamford Bridge. He would surely come good.

Well, not exactly. Torres did improve slightly in his second campaign, but barely. For some inexplicable reason, he had become a shadow of his former self, a stranger to the league that catapulted him to the world stage.

Torres’ first goal of the 2011-12 season came in a 3-1 defeat at Old Trafford. Another strike with little significance. Chelsea fans were fast losing their patience.

In total that season he scored only six goals in 32 league games and three goals in 10 Champions League games. But that doesn’t even come close to telling the whole story.

The 2011-12 season, of course, was a special one for Chelsea, perhaps the most unforgettable in the club’s history – and Torres was a huge part of it.

The first two of his three Champions League goals came in a 5-0 victory over Genk which helped the Blues progress to the last 16 – but his real contribution was still to come.

After overcoming a 3-1 first-leg deficit to see off Napoli and then beating Benfica in the quarter-finals, the end of the road appeared to have come for the Blues, struggling in the Premier League, when they were drawn against the almighty Barcelona, the best in the world.

Chelsea fans weren’t hopeful. Even losses in both legs wouldn’t have hurt too much. Barça simply resided in a higher realm of footballing genius.

Yet somehow Roberto Di Matteo, only the caretaker manager for goodness sake, found a way.

Barcelona dominated the first leg at Stamford Bridge from start to finish.

They had the bulk of the possession, 72%, struck the bar twice and mustered up a lot more chances than their opponents in Blue, yet somehow the Blaugrana succumbed to a 1-0 defeat courtesy of a Didier Drogba goal, which came from Chelsea’s solitary shot on target. 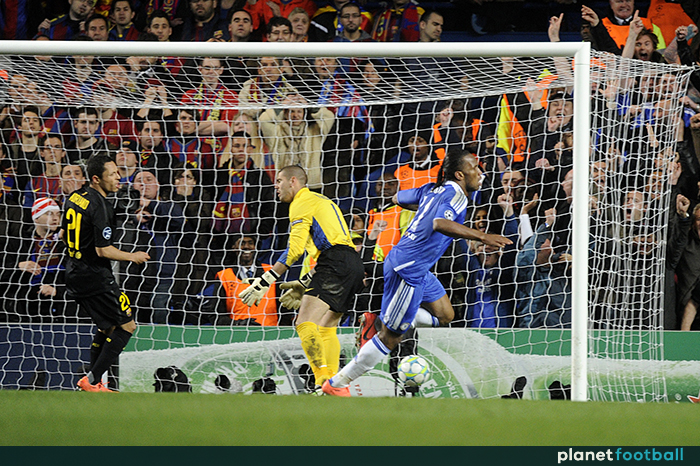 The second leg, though, would surely be different. The Blues were to travel to the Nou Camp.

Chelsea held on for as long as they could in the first 45, but Sergio Busquets and Andrés Iniesta struck to give Barça a two-goal lead before John Terry was sent off going into the half-time break. Game over, surely?

Ramires, arguably Chelsea’s best player in the first half, managed to claw one back in added time in the first half to put the Blues ahead in the tie on away goals, but Barça, the best team in the world, at home, had a full 45 minutes to score again.

We all know what happened next.

Lionel Messi missed a penalty in the 49th minute, and incredibly Chelsea survived wave after wave of home attacks to keep their noses in front.

Then, in the 80th minute, Di Matteo decided to replace Drogba with Torres. 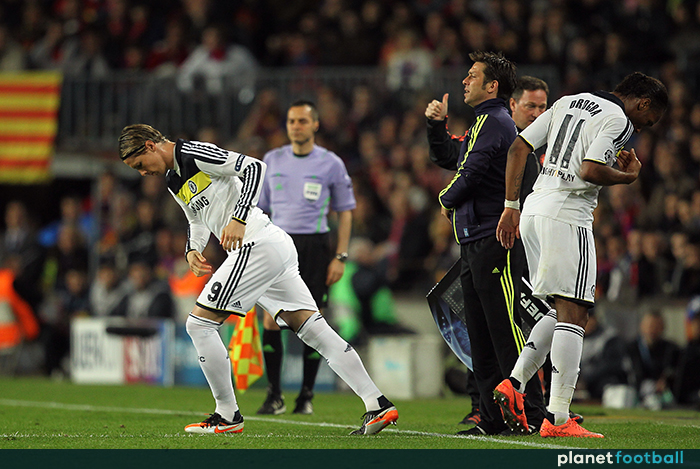 No Chelsea will fan will ever forget the Spaniard’s contribution that night.

It was the 92nd minute, and Barcelona had virtually every man forward, but suddenly their move broke down. Within milliseconds, Torres had latched on to a clearance from Chelsea’s 18-yard area and strode forward on his own.

He rounded Victor Valdes and threw Chelsea fans all over the world into delirium. Chelsea were heading to the Champions League final.

Chelsea were set to face Bayern Munich, who appeared to be an unstoppable force – but then so were Barcelona. Despite the Germans being favourites, this time the Blues felt the game was anyone’s for the taking.

Bayern were in front with more possession, shots and just about any stat that served to indicate the best team in a football match, but the game remained goalless until the 83rd minute when Thomas Muller notched what seemed destined to be the winner.

But then Torres stepped up again. He didn’t score this time, but he did win, out of nothing, the special corner kick that Drogba duly headed in to affirm his status as an all-time great.

The flop who cost £50million, who had become a shadow of his former self, had played an integral role in arguably the greatest moment in Chelsea’s history – and with that, he made his way into the hearts of the club’s supporters forever.

That last-minute goal against Barca, that corner against Bayern – one flop, two amazing moments. It culminated in Chelsea’s only Champions League trophy to date. 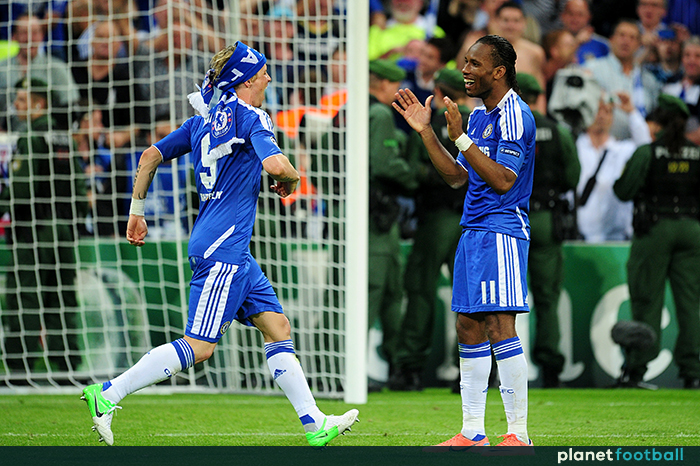 Torres may have scored only 11 goals in 49 games that season, but when Rafa Benitez was appointed as Roberto Di Matteo’s replacement in the midst of Chelsea’s dismal sequence the following season, hopes were high El Niño could finally produce his best form in a Blue shirt.

And Benitez did indeed inspire an improvement from Torres, who finished the season with 22 goals – including six in the Europa League.

Chelsea, the defending champions, had crashed out of the Champions League in the group stage, but they made up for that disappointment by going all the way to the final of the second-tier tournament.

And after a goalless first half against Benfica at the Amsterdam Arena, it was Torres that drew first blood on the hour with his sixth Europa League goal in his ninth appearance.

The Spaniard utilised his pace to go past Luisao and Ezequiel Garay before rounding Benfica’s goalkeeper, Artur and slotting the ball into the back of the net. It was more than a bit reminiscent of his goal against Barcelona the previous season.

Oscar Cardozo scored from the penalty spot nine minutes later after a Cesar Azpilicueta handball, but Branislav Ivanovic sealed the victory for Chelsea with a last-minute header to complete a remarkable double of European successes.

And, once again, the triumph can be attributed in no small no part to Torres. The flop had played a pivotal role in yet another major cup triumph for Chelsea.

The following season, after missing an early sitter, Torres set up Andre Schurrle’s opener against Manchester City and then, after Sergio Aguero had equalised, scored a dramatic winner with a few minutes left on the clock after Matija Nastasic’s attempt to head the ball back to Joe Hart sent him through on goal.

Cometh the hour, cometh the man. Torres had the final say in the thrilling encounter in what turned out to be one of his few world-class displays in front of Chelsea’s home crowd.

It proved to be another false dawn – Torres ended the term with five league goals and was shipped out on loan to AC Milan before eventually finding his way back to where it all began at Atletico Madrid – but thanks to those two European campaigns, he will always have a special spot in the hearts of the Chelsea faithful.