Fernando Torres & the YNWA armband that foreshadowed what was to come 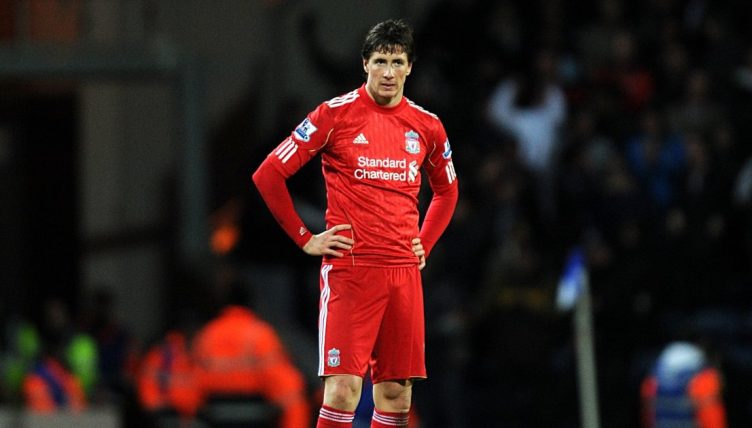 A corrupted word doc, spilt cake batter, dog sh*t on a freshly-mown lawn. The more time you put into something, the more it hurts when it all falls apart. Such is football, such is life.

There’s a reason loan signings and deadline day panic buys *rarely* work out. A lack of logistical planning, yes, but it’s the lack of emotional planning that’s just as detrimental. It’s tough to fluke an emotional connection, and while fans often try their hardest to engineer reasons to fall in love with a player, there’s only so far desperation can take you.

The day a player signs a contract with a club, the next stage of their career is a blank page. When United beat their rivals to the signature of Alexis Sanchez in 2018, their fans weren’t to know of the disaster that would unfold. All they knew was that one of the best players in the league had signed on to write the next chapter of their story with a club they claimed to adore.

So, when Liverpool fans came across a bleary-eyed striker who seemed to have cold proof that he loved their club, nobody thought too far down the line.

Playing for his boyhood club Atletico Madrid in a 2-0 away defeat to Real Sociedad in April 2007, Fernando Torres sealed his fate. A scuffle, a ruffle, and a slow unravel which set everything in motion. Inscribed on the inside of Torres’ armband were those four immortal words: You’ll Never Walk Alone.

At this stage, Torres was hardly a new kid on the block. This was his fifth season as a regular fixture in Atletico’s starting XI, and he’d amassed over 70 goals for the club since breaking through as a 17-year-old. He became their youngest ever club captain at 19 and had already reportedly turned down approaches from Newcastle and Chelsea (twice).

Safe to say, you’d have to be pretty cruel to not sign a player of Torres’ quality after they’d made their desires so blatantly obvious (sorry, Peter Odemwingie). So, right enough, Rafael Benitez sanctioned a record deal of around £25million to bring Torres to Liverpool, with Luis Garcia jetting off in the opposite direction.

Of course, no prizes for guessing what was the first order of business when Liverpool’s new star signing did his first interview.

“There is a group of my mates, about five or six of us, and we’ve all grown up supporting Liverpool. Because they are all so committed to Liverpool, they’ve had We’ll Never Walk Alone tattooed on their arms… Obviously, I couldn’t have that tattooed on my arm playing for Atletico, but they gave me this armband as a present for my last birthday.”

Already, like a toddler who’s worked out that a certain wiggle of the hips gets everyone in the room laughing, Torres had his audience in the palm of his hand. What had started out as something of an illicit affair had now been allowed to fully blossom into a no-holds-barred marriage.

But in football, one side’s pleasure is another side’s pain. Atleti had just lost a local golden boy, their youngest ever captain and brightest prospect.

The thing about football narratives is that no two can exist in the same space at any given time. As one enters the frame, it draws a pistol from the back pocket of its denims and slings the three-gallon hat off the scalp of its predecessor.

Liverpool fans didn’t care how the departure of Torres hurt Atleti fans. All that mattered was the present, and Torres was a Liverpool player.

Besides, Torres was the perfect fit for Liverpool. He grew up in Fuenlabrada, a working-class town on the outskirts of Madrid. He cut his teeth in the Spanish second division playing for his boyhood club, he married his childhood sweetheart at his local town hall. At a time when footballers were the biggest celebrities around, Fernando Torres was hardly David Beckham.

Humble off the pitch and devastating on it. Torres may not have had the longevity of Fowler or the genius of Suarez, but he gave Liverpool fans countless unforgettable memories at a time when most of the football was at times forgettable.

In terms of resources (and general talent), Liverpool were relative minnows in comparison to sides like Manchester United and Real Madrid, but it seemed like Torres relished big occasions more than any other player in world football.

He ran the Galacticos ragged from start to finish in 2009, including a turn that nearly put Fabio Cannavaro into a retirement home; he forced Nemanja Vidic into a state of total consternation every time he entered within 100 yards of his personal space; he scored winners against Arsenal, Chelsea, Spurs.

Torres, the man who… left Liverpool for Chelsea because they were offering him bags of money? Huh?

In 2010, a new sheriff rolled into town, and his name was envy. Remember all the stuff I said about Torres having a special bond with Liverpool, one which would never die? That was a joke. Actually, he was a money-grabbing, glory-hunting, good-for-nothing so-and-so who wouldn’t know the best fanbase in England if they wrote their name down on a piece of fabric and strapped it to his arm – at least in the eyes of some.

As it transpired, Torres made 30 more appearances for Chelsea than he did for Liverpool but scored 46 fewer goals in that time. His spell at the Blues was blighted by injury and inconsistency, but was it really any surprise he didn’t enjoy the same success there?

If Torres was ‘built’ for Liverpool, could he really ever succeed at Chelsea? As far as top-tier English clubs go, the two could barely be more different.

We all know the cliches. Liverpool make the superstars, Chelsea buy the superstars. Liverpool invest in managerial projects, Chelsea snap the head off of anyone who utters the phrase ‘contract extension’. Liverpool’s anthem is choral and dream-like, Chelsea’s is the lyricless source material for a Specials song. Chalk and cheese, apples and oranges, lions and liverbirds.

Maybe that’s what made it hurt all the more, that he joined a club so antonymous with what he’d shown an affinity towards before. Then again, try telling an Atletico fan that Torres’ departure ‘meant more’ to Liverpool, see what they say.

Perhaps, all in all, El Nino inflicted more pain than pleasure (again, just ask Vidic). But, does that mean it wasn’t worth it, or that any Liverpool or Atletico Madrid fan would go back in time and rip up his contract before it was signed?

Probably not, but we football fans are weird like that.