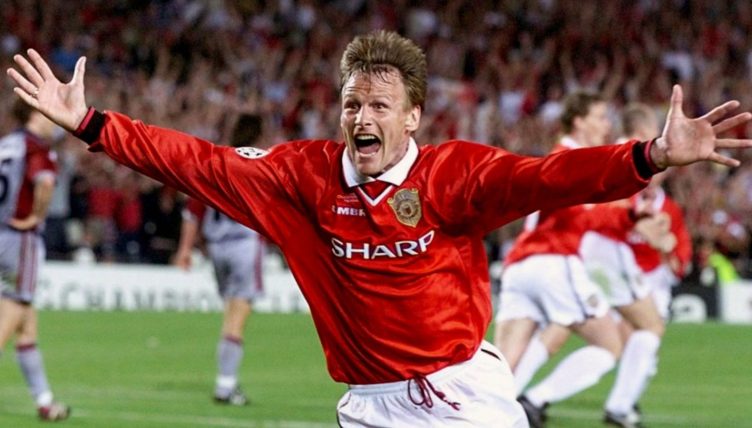 ‘The King is dead, long live Prince Edward,’ wrote The Independent. But when Manchester United picked Teddy Sheringham as Eric Cantona’s replacement in the summer of 1997, not everybody was convinced.

Plenty were unsure about Sheringham when he arrived at Old Trafford from Tottenham for £3.5million, with questions raised about the wisdom and ambition of signing a 31-year-old, two months Cantona’s senior, who had never won a major honour and had scored only eight Premier League goals during the previous season.

This was during the summer Inter Milan broke the transfer record to sign 21-year-old Ronaldo from Barcelona for £19.5million, while at Old Trafford, they settled for Sheringham and Henning Berg, despite chief executive Martin Edwards bragging about how the club had submitted three offers of over £10million for defenders plying their trade in Italy.

Edwards and United faced accusations, largely from their own supporters, of taking a tight-fisted approach to their task of staying at the top of the Premier League and climbing those final steps in Europe.

Edwards, as always, rode it out. “I can’t think of any better player to replace Eric Cantona,” he said. “They are slightly different in style, but it is one big name out and one big name in.

“We have been looking for a while for a front player of this quality. We thought it wasn’t going to happen, but it was a nice surprise to know Teddy was available.

“The price originally was a bit prohibitive, around £6million. But Teddy is just 31 and there is plenty of mileage left in him.” 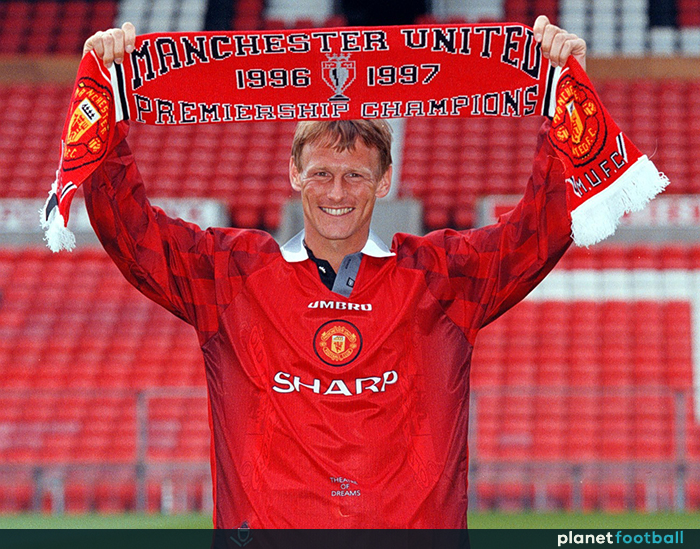 Edwards may have been proven correct in the long run, but things could hardly got off to a worse start for Sheringham in a United shirt.

On the opening weekend of the season, making an immediate return to White Hart Lane, Sheringham missed a spot-kick against his old side, and though his new team-mates dug him out on that occasion, immediately, it drew negative comparisons with penalty king Cantona.

Sheringham was confident enough to brush it off, but it cannot have helped that Eric was still at the forefront of United fans’ minds, and even the manager’s.

Barely a week after Sheringham’s debut, Ferguson penned this missive to his ex-player, even discussing where his replacement wasn’t matching up.

“As you know, we signed Teddy Sheringham to replace you, but at the moment he is finding it quite difficult to find the space he got at Tottenham and is playing deep so we have some adjusting to do.

“Players sometimes don’t realise how difficult it is to play at our level as every game is a cup final four our opponents so I just hope he can do it for us.”

It wasn’t until his fourth game that Sheringham got off the mark for United, but then followed a goalless September, which did little to allay anyone’s concerns, especially Ferguson’s.

But the manager will have taken great encouragement from his striker’s purple patch through the autumn, in which he notched seven goals in seven matches, starting with a decisive equaliser against Juventus during his first ever European tie.

He and Ryan Giggs demonstrated their understanding, with Sheringham spraying the ball out for the winger, who stood up a high cross to the far post for Sheringham to leap above the Juve defence and thunder home a sublime header.

Sheringham later returned the compliment, reversing the ball into Giggs before the Welshman scored with a wonderful effort inside the near post.

Despite his friendship with Beckham and the relationship he had built up with Giggs, not all of his new team-mates were as welcoming.

“I was devastated when Teddy Sheringham signed for United because I couldn’t stand him,” Andy Cole admitted after they both retired. 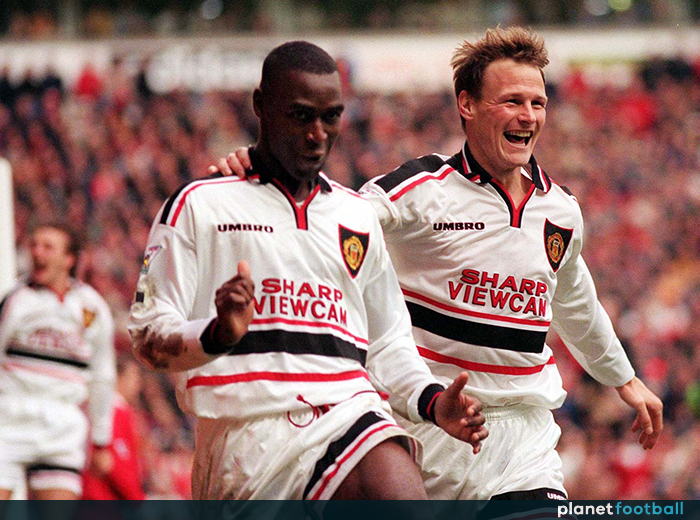 It all stemmed from a perceived snub from Sheringham towards Cole as the latter replaced the former when coming off the bench to make his England debut versus Uruguay in 1995.

Cole said later: “I am ready to shake. He snubs me. He actively snubs me, for no reason I was ever aware of then or since. He walks off.”

However, despite barely uttering a word to each other during four years in each other’s company, Cole and Sheringham forged an efficient working relationship at United, scoring 54 goals during 4,581 minutes playing together, averaging a goal between them for every 84.8 minutes alongside each other.

In isolation, however, Sheringham averaged a goal every 242 minutes during his first season, ending the season on only nine Premier League goals, six behind Cole, and ultimately potless, with Arsenal winning the Double.

United signed Dwight Yorke from Aston Villa for £12.6million at the start of the 1998-99 season, and not only did the new boy hit the ground running, he struck up the kind of friendship and partnership with Cole that managers dream of.

Sheringham made just 10 starts in all competitions and scored only two Premier League goals that season, yet it was the campaign in which he wrote his name into Manchester United folklore.

With United chasing the Treble, Ferguson rotated his squad to perfection, with Sheringham playing as many minutes in the final eight games of the season as he managed in the previous 30.

Indeed, he was given a start on the final day, when United needed to beat his old club Tottenham to claim the championship.

However, with United 1-0 down, Sheringham was replaced at half-time by Cole, who scored the title-winning goal within seconds of his entrance.

Sheringham might not have appreciated the manner of the triumph, but the victory over Spurs gave the striker his first major honour. And Sheringham played a far greater role in his second and third medals over the coming 11 days.

He was relegated back to the bench for the FA Cup final, despite Ferguson resting some of his big-hitters for the Champions League final later in the week.

But an early injury to Roy Keane gave Sheringham his opportunity and it was his turn to make a quick impression, latching on to Paul Scholes’ disguised through ball to finish between Steve Harper’s legs.

Sheringham returned the favour later for Scholes to add a second as United easily saw off Ruud Gullit’s men, with Sheringham earning the Man of the Match award.

Sheringham believed his Wembley performance might have been enough to earn a place in Ferguson’s XI against Bayern Munich.

“I thought I would have a shout at starting at Camp Nou,” he told The Guardian in 2009. “I was quite upset when the manager told me that I wouldn’t be.”

“There is a selfish element – I wanted to play a part and I wanted to be the hero. I remember Sir Alex coming up to me at half-time and saying, ‘I’m going to keep it the same but make sure you are ready because if it stays like this for 10 or 15 minutes you’re going to be coming on.’

“I didn’t want our team to score in the next 10 or 15 minutes. I wanted the team to stay 1-0 down so I would have a chance to play in the Champions League final.”

With United showing little sign of forcing an equaliser, Ferguson changed it with a quarter of the game remaining.

Sheringham replaced Jesper Blomqvist, but still Bayern looked the likelier side to score, hitting the frame of Peter Schmeichel’s goal twice, either side of Ole Gunnar Solskjaer’s introduction with nine minutes to go.

“I did not realise it was so near the end until I saw Schmeichel coming up for the corner,” Sheringham explained to The Guardian.

“Then I knew there could not be long left to play. The ball came in from Becks, it went to the far post and Dwight Yorke headed it back before a defender half-cleared it and it went to Giggsy on the edge of the box. He scuffed his right-foot shot and it came my way.

“I knew I was onside because they had a fella on the line. Before I hit it he ran out, so when the ball came to me it looked like I was offside, but I knew that I wasn’t. After I’d scored I went off celebrating, but I checked with the linesman to make sure he’d seen it right.

“A few seconds later we had another corner and Becks took it again. I went to the near post and got in front of my man, but I got up a little bit early and realised I wouldn’t be able to score, so I flicked it on to the far post into an area where I knew one of our players would be and Ole stuck out a leg and put it in the top of the net.”

Solskjaer’s poke sparked scenes never to be forgotten by United fans – or Bayern’s – and a party Sheringham described as “without a doubt the most enthusiastic celebrations of my career – we were celebrating winning the Treble, so we made it one hell of a party in Barcelona”.

David May was a little more candid: “The party afterwards was a brilliant night. Simon Le Bon couldn’t get in and Ryan Giggs had a fight with Martin Edwards’ son and sparked him. I could relive that night every other night for the rest of my life.”

At 33, and gone from having won f*ck all to having won the lot, Sheringham might have been forgiven for taking it easy.

But his best season, if not United’s, was yet to come. Aged 35 and back in the England reckoning after being ignored by Kevin Keegan for Euro 2000, the veteran striker ended the 2001-02 season as United’s top scorer with 21 goals in 33 appearances, a haul that earned him the PFA and FWA Player of the Year.

However, despite Ferguson’s pleas for him to stay, Sheringham saw Ruud van Nistelrooy’s arrival as his cue to leave Old Trafford.

The striker claimed it was “his toughest decision”, but the United bench could not compete with Tottenham’s offer of a two-year £40,000-a-week contract back in London.

Sheringham headed back to the capital a three-time Premier League title winner, an FA Cup winner, a European champion and Player of the Year.

And though replacing Cantona was the impossible job, in achieving Champions League glory, he accomplished the only thing Cantona couldn’t at Old Trafford.