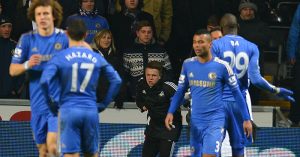 A ball boy (C) picks himself up off the ground after being involved in an altercation with Chelsea’s Belgium midfielder Eden Hazard during the English League Cup semi-final second leg football match between Swansea City and Chelsea at The Liberty stadium in Cardiff, south Wales on January 23, 2013. Hazard was sent off after the incident. AFP PHOTO/ANDREW YATES

RESTRICTED TO EDITORIAL USE. No use with unauthorized audio, video, data, fixture lists, club/league logos or “live” services. Online in-match use limited to 45 images, no video emulation. No use in betting, games or single club/league/player publications. (Photo credit should read ANDREW YATES/AFP/Getty Images)