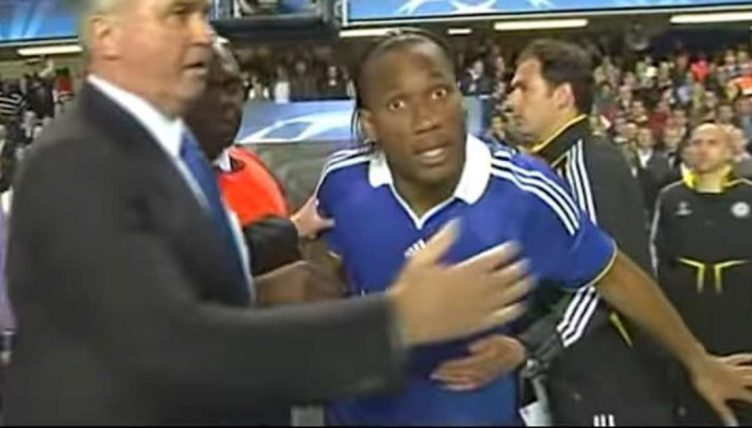 “It wasn’t my best day, really,” said referee Tom Henning Ovrebo after his performance in Chelsea’s Champions League semi-final against Barcelona in 2009.

Chelsea fans still despise the infamous official, who was the subject of Didier Drogba’s, “Are you watching this? It’s a disgrace. It’s a f*cking disgrace,” tirade into the camera after the full-time whistle.

This came just moments after Michael Ballack chased Ovrebo down the pitch after he failed to award a penalty for a fourth time during the match.

Having drawn the away leg 0-0, Chelsea simply needed to win at Stamford Bridge to progress to their second final in two years.

And they went 1-0 up through Michael Essien’s left-footed volley from 25 yards, which crashed in off the crossbar just to make it even better.

Ovrebo then went on to wave away three penalty appeals for the hosts before he questionably sent off Eric Abidal for a coming together with Nicolas Anelka outside the box.

Andres Iniesta hit a famous equaliser from the edge of the area in stoppage-time to send Barca through on away goals, but there was still time for Ovrebo to dramatically wave away yet another penalty.

It prompted unsavoury scenes at Stamford Bridge as Chelsea crashed out of the competition.

We’ve taken a look back at each one of Ovrebo’s debatable decisions to see whether he was right or wrong – or mostly how wrong he was.

To be fair to Ovrebo, this one is explainable. Looking back at the replay, Malouda looks to be outside the box when Dani Alves blocks him off.

The Frenchman of course cleverly falls into the box, but the official races over and points for a free-kick and not a penalty.

If he had given a penalty here there would probably have been uproar coming from the other direction, so it was a lose-lose situation for the official and we will let him off.

When Abidal should have been sent off

The next appeal came from Drogba, who was played into the area and looking to get a shot away as he raced towards Victor Valdes.

Abidal was with him all the way, though, niggling at him and eventually bringing him down just as the Ivorian attempted to pull the trigger.

Ovrebo was having absolutely none of it, though, not even waving away the claims and simply running away as Valdes had collected possession by now.

Perhaps his argument is that Drogba went down too late, but the replays seem to show a series of fouls by Abidal with the Chelsea man trying to keep his balance and take a shot.

When Abidal was sent off

Not a mistake that Chelsea will complain at – although if Ovrebo had done his job properly the left-back wouldn’t have been on the pitch by now anyway.

Nicolas Anelka was played in over the top and went down after a slight coming together, though he appeared to trip over his own feet.

The cliche is that a referee knows he made a mistake, he will try to even it up, and a free-kick is an easier decision to give than a penalty for an official.

While trying as hard as possible to be objective here, this is clear as day.

It’s such a blatant penalty that Anelka almost doesn’t even bother appealing.

Picture the scene. Your team have been on top for the entire game, playing against 10 men and feel hard done by not to have had at least one penalty.

Then your opponents go on a rare attack and score to seemingly win the tie and progress to the final of the greatest club competition there is.

THEN you earn a corner, from which a shot is blocked by a blatant arm right on the end of the referee’s nose.

The proximity of the referee to the incident only makes it worse.

Ballack was not sent off for his shocking reaction to the final penalty appeal, chasing and grabbing the official as play went on.

“It was not my best day really,” Ovrebo said in an interview with Spanish newspaper Marca. “Some days you are not at the level you should be. No, I can’t be proud of that performance.”

Chelsea manager Guus Hiddink described it as the worst refereeing performance he had ever seen.

“But if you have seen three or four situations waved away then [the referee’s performance] was the worst I have seen.”

“After the game it is easy to say, ‘Why was this done and not the other?’” Obrevo said. “For me the important thing was to learn from my mistakes. I made that decision not to send him off and that’s it.

“I think as a referee and also as a player or coach, you have some ups and downs in your career. The special thing about refereeing is that it is a very thin line between heaven and hell.”

No matter how many excuses he makes, though, it is doubtful that the Chelsea fans will get any closer to forgiving him in the foreseeable future.