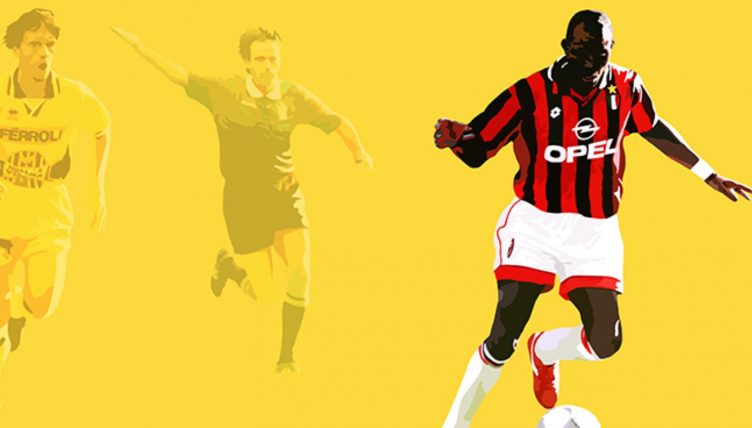 Football isn’t really about results. It’s about moments. And one Sunday in 1996, George Weah provided us with one we still talk about nearly a quarter of a century later.

Normal people can remember where they were when they learned of major world events. I remember where I was when I saw some of football’s greatest goals.

And on September 8, 1996, I vividly remember the series of events that led to me watching Weah score a goal people would still be talking about more than two decades ago.

My dad’s cricket matches were a family affair, and my siblings and I would head along to some corner of north London or Hertfordshire most weekends to play made-up quasi-sports with the other players’ kids, scavenge for sandwiches and cakes during the lunch and tea breaks, and – on one occasion – get locked in a toilet for what felt like hours but was probably about 20 minutes.

While my brother and sister weren’t really into football at that age, part of my routine also involved catching up with whatever match was being played on that Sunday.

Normally it meant listening to the radio, but on September 8, 1996 an away game in Sudbury presented me with the holy grail of watching a live match on a clubhouse TV.

There was no Sky TV, but it turned out the unremarkable-looking Football Italia live game would be a very special one indeed.

READ: James Richardson: I read the papers on Gazzetta because we had no budget

I’m not sure what possessed me to head inside and – to the best of my memory – watch the game on my own in an empty clubhouse adorned with photos of local-boy-done-good John Barnes.

Maybe my brother and sister hadn’t made the trip for that particular game, or maybe I’d eaten too many tuna sandwiches and needed to take it easy for an hour or two.

Either way, it paid off and then some.

Growing up with a love of football but no Sky subscription, Football Italia’s occasional Sunday games were often my best chance to watch live football.

That, combined with regular viewings of sister show Gazzetta, meant even a nine-year-old version of me knew Verona v AC Milan was not the most even of match-ups.

But for whatever reason, I was still watching. And I was eternally grateful for my decision when George Weah did this.

Let’s break it down.

First, Weah receives the ball a couple of yards inside the Milan area.

Now what is he even doing there at a defensive corner? Who is he supposed to be marking? Has he let them free in error, or has he worked out the flight of the ball and left them deliberately.

The answer, if in doubt, is to remember he’s George Fucking Weah. This will crop up as an explanation again.

Next up, that first touch. Normally this would be grouped in with the positioning, but it deserves its own entry.

When someone tells you about one touch launching a counter-attack, what do you think of?

A long ball over the top? A player knocking it past an opponent at pace and picking it up on the other side? A flick taking out two members of the opposition in one fell swoop?

If you pictured one of these things, fair enough, you’re not alone.

I’ll forgive you, on the grounds that you didn’t have George Weah in mind when picturing the move.

This is a mistake. You should always have George Weah in mind.

To bring a high ball down with such grace, in a position where the tiniest misstep could place the ball right back in the danger zone, is as brave as it is stupid. Well, it would be for most other players.

Sure, Weah had space in front of him after that silky first touch, but it would have been ever so easy to find an open team-mate. But why do that when you can burst forward 40 yards and take backtracking opponents out of the game?

It is, to use a technical term, not fair.

You’re allowed to be the quickest player on the pitch or the most skilful – never both.

The 1996-97 season would prove to be Weah’s most prolific for Milan, with 16 goals in all competitions, but when he was capable of this it’s hard to work out how he didn’t end up with 61.

OK, I’m going to stop here and make an admission. The Verona defender around the 22-second mark should probably win the ball.

At the very least, one of the three men surrounding him should bring a halt to the run.

But again, and I can’t stress this enough, it’s George Fucking Weah,

You can think you’ll stop him. You can surround him so there’s no way for him to get through. But your mistake here is thinking any of this matters.

In Verona’s defence, this was their first game back in Serie A after promotion, and their first against Milan since Weah joined from Monaco.

However, this feels as though it’s probably no excuse: their players ought to have known what to expect, on the grounds that they have eyes.

At this stage, an ability to ghost past the next defender like he’s not there feels so inevitable that it’s barely worth analysing.

Of course he’s effectively run through a man as if he’s a hologram. Because he’s…well, like Weah himself after the 24-second mark, you can already tell where I’m going with this.

To the naked eye, the finish is nothing special. It’s just a man slotting the ball into the corner with the inevitability of a home win for Milan over a newly-promoted side.

To do so would be to ignore the context. This is a man who has just run the length of the field in the 85th minute, bursting past several opponents at full pelt.

To slow down, compose himself and stroke the ball beyond Attilio Gregori, while making it all look so easy, is not to be sniffed at. Well, for mere mortals at least.

It won’t have taken me long to forget the scoreline in the cricket game (Sudbury Court beat my dad’s team, Wombats, by six wickets – I know you were wondering).

Similarly, I doubt the scoreline at the San Siro stayed with me for too much longer. Yet all these years on, I’ve been able to replay that Weah goal back in my head, from the first touch through to the finish.

Some things you don’t forget.

READ NEXT: A tribute to Roberto Baggio and his remarkable ability to bounce back